UPDATE: The image is now considered to be a fake.  A good fake, but a fake nonetheless.  Whoever did it was very creative.  While the image wasn't real, Project 609 is definitely Transformers and is still slated to open next year. 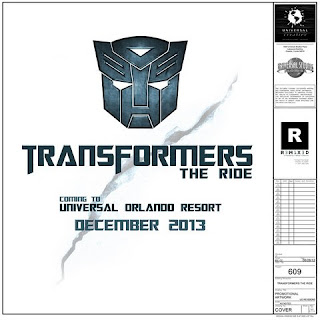 A picture made a brief appearance online that 100% confirms that Universal Studios Florida will getting the very popular Transformers attraction that recently opened this year at Universal Studios in Hollywood and Singapore.  It also appears that rumored timeline of 18 months is, in fact, accurate.

This should come as no surprise to anyone who has been following the project or our updates, but it is nice to finally have some closure.  While we would love to share the picture with you, legally, we cannot.  Out of respect for Universal and copyright law, we can and will only show you things that are public domain.

So now, we wait for an official announcement.  Until then, Prepare for Battle.  Enjoy our temporary website overlay.
Posted by Michael at 9:31 AM