So. How was everyone's week been so far? Mine's been good, got back from visiting friends, work, the usual. You? Yeah, I can understand that. Oh, don't worry about that thing, it'll be fine.
Oh did you also hear that Universal WENT INSANE?

This weekend Universal pushed permits, demolished a building, announced a NEW RESORT, put up walls in Islands of Adventure, and became a State Run Radio.
Wow.
This is ignoring the other prevailing rumors of the week as reported by those at Orlando United and WDWMagic.
Lets tackle what has come up the past few days, one by one, look at the reasoning behind it, their probability, opening dates, and other speculation. 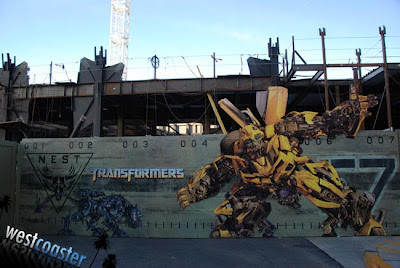 Transformers 3D construction at Universal Studios Hollywood
Photo from our BFFs at Westcoaster.net
Odds: 2 to 1 for layout, 3 to 1 for Transformers
Why?: Permits filed have called for a drainage in a ride system elevator shaft, a feature prominently in the Universal Hollywood attraction. The size of the USH show building perfectly matches the Soundstage 44-now-pit location. Transformers is a hot property, with a fantastic attraction on the west coast that rivals Radiator Springs Racers.
The issue comes down to if it is Transformers itself, or another kind of attraction. USF has been clamoring for a return of Kong, could we see a return of the big ape? Battlestar Galactica is featured in the Singapore park but no where stateside. Yet those properties are semi-dormant and not as current as the Michael Bay Transformers. 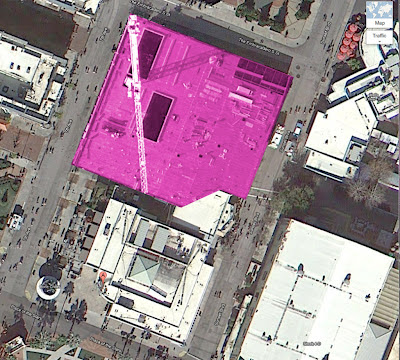 Perfect fit.
Photo from our very own Sean
With the permits and building size, I'm giving this turning into a Transformers layout attraction a near guarantee. I'm not as convinced that it'll be Transformers itself; if I was still vacationing in Vegas I'd stop by the sports book and place a bet though.
Expected Opening: Fall 2013. An expedited schedule and a delayed Potter expansion make me think this will be open very, very soon.
2.) Harry Potter Expansion: London/Diagon Alley/Hogwarts Express 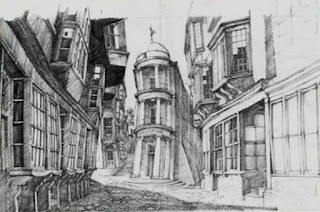 Diagon Alley & Gringotts Entrance Concept Art
From all sorts of places, but this copy is from the Harry Potter Wiki

Odds: 1 to 1
Why?: It's happening. We have had layout leaks, production leaks, and concept art for the land leak. Diagon Alley is the worst kept secret in the themed entertainment business.
A trademark was registered by Warner Bros. for the Leaky Caldron, which suggests this pub will be present, possibly as the land's Three Broomsticks. A Diagon Alley wall opening show scene will probably featured too, and unlike the Olivanders wand ceremony, will probably be higher capacity and shorter in length (in addition to a separate, non-show entrance to the land).
Oh and talking about Olivanders, the actual location from the books will be featured in the heart of the land. If rumors are to be believed, this will double the capacity of the Hogsmead version, which would make the crowd control cast of Hogsmead very happy.

And I will eat my own shoe if a Weasley's Wizard Wheezes doesn't open.
Reports suggest there are two new attractions in Diagon Alley, the Gringotts Coaster and Hogwarts Express (and it's sister station in Island of Adventure). These have been covered in full in other posts, and I'll direct you to those for information.
In addition to this, there is still an expansion pad to the east of Diagon Alley, possibly for a family style attraction.
Expected Opening: Summer 2015. Enough time for the new Cabana Bay Resort to open and Transformers to settle down. 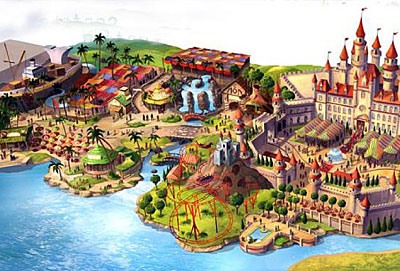 Madagascar Land Concept Art
Copyright Universal, this copy provided by LiftHill.com
Odds: 10 to 1
Why?: We know Kidzone is short for this world and Madagascar is featured in the Singapore park, so would these two meet up sometime soon?
A simple rebranding of the land, keeping the water elements and jungle gyms, would help push people to this side of the park. But what about more? E.T. could be leaving in the next few years, too, and possibly the Animals Actors stage. As for an attraction, why would Universal build the troubled Madagascar flume ride. Maybe Universal will opt to go with a family friendly omnimover style ride instead? 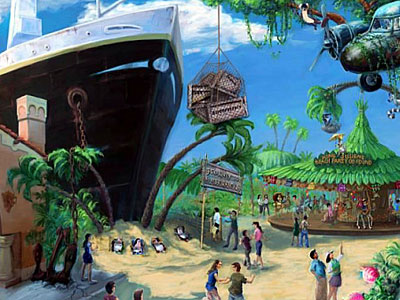 
Little is known of this possibly addition, what it would entail, or even if it's happening. Just lots of innuendo from those knowledgeable of additions.
Expected Opening: Summer 2016, earliest. More like 2017. We just don't know enough.
4.) Island of Adventure Additions 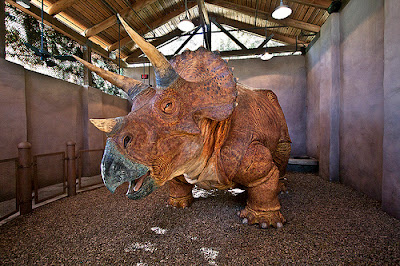 Endangered in more ways than one.
Photo courtesy of Flickr user theNickChandler
Odds: 5 to 1
Why?: Like Madagascar, we don't know enough. Parkscope HQ has gotten word of two possible additions in either the Jurassic Park or Seuss Landing areas of the park. Jurassic Park will lose the Triceratops Encounter for a family coaster and/or Seuss will get a Lorax dark ride. A family offering in the park, with low or no height requirement, would be a major addition to a park dominated with height requirements.
Expected Opening: Rumors point to this opening in 2014 as the last holdover before Potter 2.0 opens, giving the resort another attractive people eater for what could be it's most profitable, and busy, year ever. 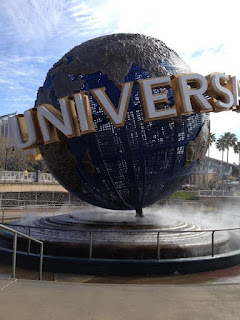 Photo curtsy of me!

Odds: 20 to 1
Why?: Too much can happen between now and Diagon Alley. Too many movies can fail, bust, or just not work as theme park attractions. This rumor was repotted by Martin over at WDWMagic, so this is news to everyone. We will work on scouting out more information as the months and years progress.
Expected Opening: Post 2016.

6.) Hogsmeade addition
Odds: 10 to 1
Why?: Besides the Hogwarts Express stop, all we have are some Jim Hill reports and few cryptic posts by insiders. On the Disney Dish podcast, Jim Hill mentioned a possible family attraction based around the Whomping Willow, but this was before Phase 2 as we know it was leaked via SFWMD permits. With the expansion of Hogsmeade into The Lost Continent, this attraction will most likely be placed on the way to the Hogwarts Express.  Previously (and quite often), Jim has mentioned a Great Hall dining experience for Potter.  According to him, the restaurant would be 2-stories tall with the kitchen on the bottom floor and guests/the Great Hall on the 2nd floor.  An intriguing effect would enable food to be loaded on the bottom floor and within seconds appear under a covered dish in the Great Hall.  Space constraints may prevent this from happening at IoA, but Hill thinks it is a shoe-in for Universal Hollywood.  He also says Universal Creative has desperately been looking for ways to shoe-horn it in between Hogwarts and Jurassic Park.


Cryptic comments from insiders Lee and Martin from WDWMagic have something else coming in addition to Phase 2.  Lee mentioned a mini-land, and Martin mentioned "something else maybe" for Potter.  These could be anything.
Expected Opening: Don't know. While I would feel like 2015 would be good to complement the Diagon Alley expansion, I feel other additions to the park would make more sense at that time. 2016 sounds more plausible, but we can't read Universal's hand this far out.
The Universal Decade
Martin and others have also mentioned a new water park and a full, 3rd theme park gate. 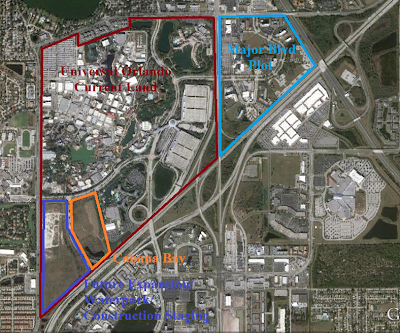 Thanks to Michael, we have this great overhead view of the Universal plot. In the top right is a potential major expansion pad, one that could fit a 3rd gate and more resorts if Universal could acquire it. In the bottom left is a plot for a water park or new resort, on which is land already owned by Universal already. Plans have leaked for a new water park, but the motive for such a movie is still in question. Yes, Wet’n’Wild is located off property, across I-4, and doesn’t feature the same care and attention as the other two parks (Wet’n’Wild was initially owned by another party). But why build another water park so close to another; two water parks that only service four hotels? Word has it that Wet'n'Wild slides would just be relocated to the Universal waterpark.  Last year, Universal trademarked the name "Wondersea Island."
New hotels? New water parks? A new park? There just can’t be any way some moving walk ways and waterways can actually be a viable transportation system? That will be a serious issue for Universal as they tackle how to adequately move people across the resort. UOR has a blessing in being nearly 100% walkable, but when will this get pushed to the breaking point? If new resorts, water parks, and parks are announced, I think we will see a new, Universal Transportation Center. Maybe even the first new monorail fleet in Orlando in over two decades?
Sleeping Mice
Team Disney Orlando has been fat and lazy for over a decade and a half by now. Universal’s ownership of Blackstone and their poor initial “Universal Escape!” branding didn’t work. Even with Harry Potter, Universal attendance is still behind Disney’s worst parks. Year to be Here and the 2013 addition will help, but will a dent be made?
TDO and Burbank have put WDW on auto-pilot for years now. A few additions here and there, some enhancements to queues, more DVC, and lots of discounts attempt to lock in Disney fans and the once/twice a lifetime visitor. It’s widely reported a Disney Hollywood Studios version of Carsland has been rejected by TDO and the Monsters Inc coaster is in cryo-freeze. Sources have popped up recently reporting that an updated Illuminations (possibly the green lit project Steve Davison hinted at) and parade at one of the parks is in the works. Even TDO leakers have dropped some hints at an attraction announcement soon, possibly a scaled down Avatarland (or the $1.6 billion dollar version). 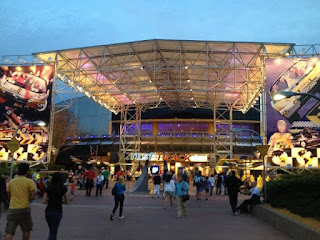 Another photo from me. One last one this past February for me to remember Test Track.

Right now the only new attractions in the pipeline for the resort till 2016/7 are the Test Track refurbishment, The Little Mermaid, the Seven Dwarfs coaster, and whatever comes with Avatarland.
But would a Universal Decade be enough to wake up the sleeping mouse? Remember, the California Adventure additions were approved by the Disney Board of Directors, which meant that the funding could not be cut by the ‘accountanteers’. WDI could have called this same play for WDW additions for it’s 50th Anniversary, or sooner.
Speculation
At Parkscope, we try to be as factual as possible. We report permits, photos, news, and history articles. This is one of the first, really big, rumor posts. Plans can change, our information can be incorrect, and we could flat out be wrong in what we guess; it comes with the business we are in. And even then, just because it’s announced does not mean it will happen, just ask David Copperfield Magic Underground and Western River Expedition how it’s going.
Please take what we say with a grain of salt. Oh and follow us on Facebook, all the cool kids are doing it now.
Posted by Joe at 11:07 PM