Joe is joined by guest Kyle to discuss their long weekend trips over Marathon Weekend. Kyle talks about his first visit to Universal in 23 years, including The Wizarding World and reuniting with ET. Then Joe talks a little about his experience at Disney's Hollywood Studios and riding Star Wars Rise of the Resistance.
Posted by Joe at 7:00 AM No comments:

Universal Studios Japan is launching their new advertising and marketing push for the park. "No Limit!" is the new slogan, highlighting the energy and elation one will feel at the park. USJ Marketing Director Ayumu Yamamoto stated if Disney is for those who want a dream world then they want Universal to make you be awake and feel alive. Talk about a shot across the bow.

Super Nintendo World will be loaded with interactive games and activities. Guests will climb, jump, and run as they score coins and defeat bosses. How will they do this? With the Power Up Band, a snap-bracelet with a RFID component that will track all your progress. Punch a Question Mark block with the band on? You'll get coins! While not confirmed at this time at the bands could interact with Nintendo products that can read Amiibo.

The bands will be for purchase but will likely cost less than a MagicBand at Walt Disney World or an interactive wand at the Wizarding World.

To track all your achievements, coins, and unlocks a new Super Nintendo World app is in development. When launched the app will let you track progress and battle bosses based on real interactions in the land.

Yamamoto-san stated there will be a larger event in New York City in February 2020 where more information will be shared including an opening date. We expect more details on the attractions in the land along with a global launch of the Super Nintendo World projects.

We Are Born to Play

In the weirdest part of it all Nintendo and Universal unveiled a preview of the land as a music video by Galantis and Charli XCX. Yeah it's really random but it's also a top trending video on YouTube with almost one million views within less than 24 hours.
Posted by Joe at 7:49 PM No comments: 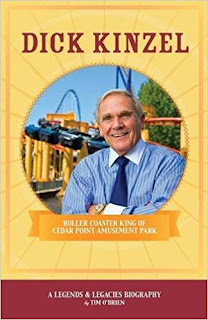 Part Five: After The Spending Spree
Posted by Alan Conceicao at 8:22 AM No comments:

Every year since starting to post here on Parkscope, I've transitioned away from doing trip reports to doing year end reviews of all the coasters I rode in any given year. It saved me a lot of time so I could do other things, but also because I grew tired of writing them. Once the pace increases, the challenge increases with it, after all.

2019 was not projected to be another epic year as the prior two had. Then I had some expendable income, and that's what it became. 76 coasters later, 2019 became my second most productive year in terms of coaster count. I wound up visiting 30 states & the District of Columbia, 8 countries on 4 continents. There were 45 parks/FECs/etc (46 if you count the Helen Mountain Coaster I was denied due to weather) along with 12 fairs or carnivals (10 of which had coasters, 4 classified as state fairs).

Read more »
Posted by Alan Conceicao at 8:22 PM No comments: