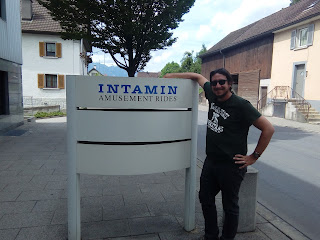 I decided to do a sort of 2017 retrospective, and given that I was going on rides right up until the end of the year, I had to wait until the next calendar started. If that isn't suitably timely, I understand your concern but also must admit: I am ignoring it for the purposes of this piece.

As a hardened vet of the coaster wars (1994-2003) who's come out with minimal PTSD, I have to admit that yes, I do keep a track record. I count. I'm that guy. I typically don't bother to track coasters I've already been on, though when I did a conservative run of what I thought I had done in total this year, I wound up with 108 total roller coasters. Rather than subject you to absolutely everything, I rounded down some of the less exciting repeats and kept it to (A) new-to-me rides in 2017 (B) stuff that was at least sorta interesting that I re-experienced, cut down to 100 coasters because that's plenty. The Excel spreadsheet I've been keeping for two decades tells me that I completed the year with 64 new additions to my life list: that's a Whistle Punk Chaser or Typhoon away from tying my second best year of 2001. Yes, I've been doing this awhile. 2002 is at an untouchable-without-Megamillions-victory 140. As I'm sure you were interested in those sorts of details, 2017 was well above my average over the last 20 years of 40.55 new coasters per annum. For my next trick: counting the number of matches dropped on the ground the second they hit the floor.

That new-to-me list I'll be reviewing with you, the reader who's eyes have already glazed over, spans 7 countries, 3 continents, and 41 parks/facilities/fairs. I encountered seemingly everything from Middle Eastern shopping malls to Midwestern American race track/amusement park hybrids. There were both mountain top coasters in Tennessee and Barcelona. There were Legolands in Dubai and Deutchland. There was variety. Plenty of it. And a fair number of SBF kiddie spinning coasters too.