Today, Universal filed a building permit with the City of Orlando for a job trailer for Project 971 which is for the Simpson's land.  This indicates that the project is likely to get underway pretty soon.

The post Potter/Comcast era dedication to quality and maintenance continues as the Brickworks facade near Disaster is about to get re-bricked.  Slalom Construction will doing the work.

Lastly, Hollywood Rip Ride Rockit is getting a new steel pass through tunnel.  Coastal Steel, Inc. is doing the work.

This past August I had the chance to do my first 'proper' Universal Orlando visit. I've been to Universal Orlando several times, either as an addition to a WDW trip or while staying at friend's houses. Neither offered the 'get up for gate opening, stay, see the nighttime show, leave' rhythm you acquire after a day or two on a normal WDW vacation. But this time was different, as I stayed an extra two days around the corner from Universal on I-Drive, and exclusively visited those parks.


With Disney on a tick-tock cycle of additions and Universal still working on its Potter 2.0 expansion (remember, this was before Transformers was green lit), Universal took the chance to flesh out the parks experience even more. The "Year to be Here" promotion got locals back to the parks and kept the tourists locked inside the resort longer.

Of the offerings, the new Universal Studios lagoon show, "Universal Cinematic Spectacular", piqued the interests of the fan community the most. It's no secret that Universal has had a, *ahem*, hard time bringing a lagoon show to life.

Disney is always been better at thematic, broad attractions that focused on mood and atmosphere over story and narrative. As such, Disney historically has three distinct advantages over Universal parks:

So when the domes were deflated and water screens were hoisted, the same old Universal Creative question came up: can they create an atmosphere and theme without a story? Yes, Universal has created a nighttime show that acts as a night cap and lives up to it's name.

The show whisks guests through the vast catalogue of Universal movies by focusing on the various genres that move and inspire us. The water fall screens act as the main focus as Morgan Freeman narrates our journey. The fountains and spray screens fill in the lagoon with color and movement while fireworks accent moments and action on the screen. Cinematic Spectacular embraces the best qualities of movies and how they affect us. After just one showing I was already lining my Netflix queue.

Cinematic Spectacular works because it has an anti-plot; there is no story beyond collected themed presentations. There is no Mickey battling evil, the creation of the world, or kid's dreams. It's movies, fireworks, and water.

The most hyped part of the show, the fountains, are the lowest focus of the show. The unique water droplet curtains aren't used to much effect beyond the preshow, and the fountains just go up, down, and sway. This is odd, as concept art and announcement hype compared this to "Universal World of Color", and even some internet personalities (*shivers*) dubbed it "UniColor".

Comparing Cinematic Spectacular to World of Color was highly prevalent during the announcement and installation period. But why? How can someone who sees this...

compare it to this...

To me this is a core problem with the themed entertainment fan community. Nothing can stand on it's own or be looked at inside a vacuum. When this is used positively, one can get guests to try new, and sometimes better things ("It's just like Space Mountain honey!"). When used negatively we get comparisons that set up for disappointment or belittlement ("It's nowhere as good as Indiana Jones Adventure.") I believe fans of themed entertainment have a desire to imagine and soak up as much as possible. It's not just good enough to see Magic Kingdom, but now you have to see Disneyland in California, Tokyo, and Paris. What are the differences? What's better?  What should come 'to the states'? And what is next to be created? So when Universal announces a new show that shows concept art like this...

People naturally compare it to World of Color, a known entity. Something from across the country, a show many have not seen.

Do I blame them? No. But I hope this example of expectations and comparisons will have some people looking at how they view the discussion groups and Twitter. Cinematic Spectacular is a great show that stands on it's own, and should be treated as such. Now please excuse me while I go go watch ET again...

Today, Universal Orlando Resort put out a teaser and a countdown clock that will end November 1st 2012 at 7:30 PM EST. But what will they be announcing? So far there are two large construction projects going on, one being Transformers, the other the second phase of the Wizarding World of Harry Potter.

Well, an intrepid young sleuth over at Orlando United has found that the coding of the countdown clock is titled "TransformersCountdown". So that settles that, true believers. We'll finally be getting confirmation that Transformers the Ride will be coming to Universal Orlando Resort! And hopefully, that won't be all we're hearing about!
Posted by Sean at 1:34 PM No comments:

Today, Universal Orlando submitted a notice of commencement for a new stage to be built at the Wizarding World of Harry Potter, which can be seen below. 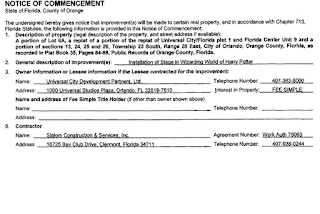 One can assume that this will be installed where the Frog Choir and  Triwizard Tournament show take place in order to give spectators a better view of said shows. Or, could it be a temporary stage for a new announcement? If it's for the former, it's great to see Universal to continue to plus the land.

Universal filed a new Notice of Commencement today for the ET Adventure with Dynamic Attractions INC for new ride track switches. The notice of commencement can be seen below, as well as a link to the document. 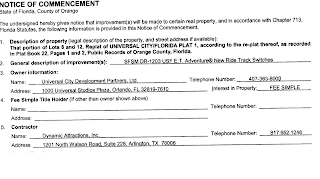 Obviously, it is unknown at this time whether the track upgrades/maintenance will require the closure of the ride, or whether the work will be done during third shift, but follow @Parkscope for up to the minute updates. The Notice of Commencement expires at the end of the year, so if there is a closure we should know about it soon. Here's to hoping an old classic will receive the attention it deserves!