Universal filed a Notice of Commencement with Orange County today for "Interior Improvements" to be done by Nassal in USF.

Further inspection of the NoC elaborates that agreement is for the installation of "Project 722 Show Sets." 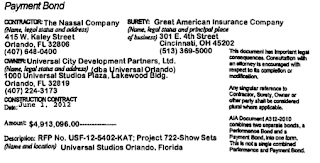 This comes as no surprise as Nassal seems to be Universal's go to company for facades and show elements.  Nassal themed the new lagoon wall last summer for Phase 2 of Wizarding World, did the new City Park lagoon wall, and is currently working on the controversial Transformers facade.  They also were responsible for Phase 1 of Wizarding World.

As always, follow us on Twitter for up to the minute updates @Parkscope and @CaptMichael87
Posted by Michael at 12:12 PM No comments: Universal Studios Singapore's new family dark ride is in Annual Passholder Previews and reviews, photos, and some video are coming in. The ride is getting positive, if somewhat reserved reviews.

Dejiki.com has a review of the attraction up, so go and read that instead of my rehash.

User sonikbyte has uploaded a YouTube video. It appears to truncate the attraction half way through.

I find this attraction incredibly interesting as it's the first true family dark ride Universal has built since ET. It'll be interesting to see how the public reacts.

The fantastic Disney and More blog has a great post on rare, vintage videos of Walt Disney World circa 1971. It's worth a watch to see the preview center and what the park looked like Day 1.

Death of a Moonwalker

My crude mashing of the keyboard continues to be shamed by Passport to Dreams. Her newest post, Death of a Moonwalker: Captain EO, destroys nearly all other themed entertainment writing. Foxxy looks at the concept of camp, 'fiascos', creative failure, and why Captain EO stands out despite all odds. Get over there and read this if you haven't already.

ParkRumors.com reports rumors on Disney's plans for the Downtown Disney/Pleasure Island/West Side re-conceptualization. If true, I'm very excited for what I see, Disney seems to have learned from the highly successful Disneyland Resort Downtown Disney and is applying it the original. And I know several Disney historians will be happy to hear "The Marketplace" name will be coming back.

The Future That Never Was

My childhood lined up with the opening of the 1994 re-theme of Magic Kingdom's Tomorrowland. I was exposed to the idea of having a cohesive theme through a large area. While I saw Adventureland as simply some buildings and plants, Tomorrowland's tongue in cheek nature showed me how to look more into details. I agree with some that the planetary hub of the galaxy theme should have extended beyond Rocket Tower Plaza, and that some elements where heavy handed, but it was MINE.

Brice over at the ProgresslandBlog writes a fantastic piece on Tomorrowland, it's meaning, and the bizarre Alien Encounters TV Special.

I apologize for my absence from the site. I have been slacking off and figuring my life out. I have several posts planned, and am excited to get back to writing.
Posted by Joe at 10:34 AM 2 comments:

Looks like Universal will be adding even more lasers to Cinematic Spectacular in the coming weeks and months, as they have filed a new notice of commencement for them, which can be seen below.

Listen, I know I'm the guy out there that is often snarky and sarcastic. Probably to a fault most of the time. But that's not what I want to do today. In fact, I really don't have it in me. Not after the news of last night and today. I'm sure you know what I'm talking about. Tony Baxter, Senior Vice President of Creative at Walt Disney Imagineering and legend in the truest sense of the word, has retired from Imagineering. I know some of you will say he's still a consultant, but let's be honest with ourselves, that means he's retired.

I would be kidding myself if I told myself Tony would have been around for longer anyway. And largely, his talents have been wasted at WDI since the mid 90s. For the past decade it seemed like he couldn't get anywhere near a legitimate blockbuster attraction.

But Tony leaving is still probably the saddest thing that's happened in the Disney world for me as long as I've been alive, or aware, of what was going on. I'm not going to go into what this means for Disney or WDI. This isn't a day for that. Today's a day for celebrating this man's accomplishments.

When I think of Mr. Baxter and his projects, I think of my family. More than any other WED/WDI member, aside from maybe Marc Davis, Tony's projects have given my my family and I our most lasting memories. Whether it was laughing together on Big Thunder Mountain or screaming on Splash Mountain, his rides have always planted smiles on our faces.

Mostly, however, his rides make me think of my dad. Most of you probably don't know this, because I don't like talking about it, but my dad passed away a little over four years ago. The man was my best friend bar none, and losing him was incredibly, incredibly hard.

But after a while, you forget the hard part and remember the good times. And thanks to Mr. Baxter, I have some of the best "good time memories" of my old man than I could have ever hoped for. Big Thunder Mountain Railroad was my first "big kid" roller coaster, and I was seated firmly next to him, as I would be each trip after that, even until our last trip together a few months before he passed. I remember our first plunge down Chickapin Hill, and then a few years later having my sister seated safely between us as she took her first splash down. Eventually my sister and I got to big for all three of us to share a seat, but we all continued to ride multiple times every trip, and even managed to sneak my scaredy cat mom on for a few rides.

Most of all, though, I remember Journey Into Imagination. I was first introduced to Figment and Dreamfinder during my first trip when I was almost three years old. Little did my mom and grandmother know then that one ride would become an obsession. For the next 8 years I would want anything and everything Figment that I could get my hands on, and every trip meant going to see my buddy Figment...eight or ten times. My mom would usually peter out around ride three or four, but Dad would stick with me until I had filled my Imagination fixation. He would laugh, sing, and even help me hide during the "scary part" in my early years. The ride and those experiences made me want to become an Imagineer, a dream that wouldn't come true, but would lead me to work at the Magic Kingdom as a Jungle Cruise skipper for a few years. And for all those terrific rides and experiences, I will be eternally grateful.

Since Dad moved on, I've been lucky enough to see more of Baxter's work, including his redo of Disneyland's Fantasyland and his beautiful park sitting in Marne-la-Vallée. But even being in Disneyland Parc Paris, I was still brought back to those days when I was a kid in Magic Kingdom. Even whipping under the Rivers of the Far West in Paris's Big Thunder Mountain made me think of that first plunge into the dark and sitting next to Dad on my first Big Thunder ride all those years ago. That's just something money can't buy.

Now, Mr. Baxter, I'd like to speak directly to you. I know you'll probably never get to read this, and I doubt I'll ever meet you in person to tell you it, but I want to thank you for all you've done for Walt Disney's theme parks these past 47 years. Many people to this day ask me why I continue to go to Walt Disney World and Disneyland as the trips become more expensive or as I grow older, and I just smile because they can't understand. I continue to go back because of the memories I made with my family. Memories that you helped me make with your works. And I know thousands upon thousands of people feel the same way as I do.

So thanks, Tony. Thanks from my family, me, and all those theme park fans who feel the same. Enjoy your time off. You've earned it.
Posted by Sean at 3:58 PM No comments: