3.19 - It's Not The Harry Potter Celebration without You, Hagrid

Email us at parkscopeblog at gmail dot com or follow us at Parkscope, ParkscopeJoe, CaptMichael87, ParkscopeNick, and/or Parkscope_Sean.
Posted by Joe at 12:13 AM No comments: 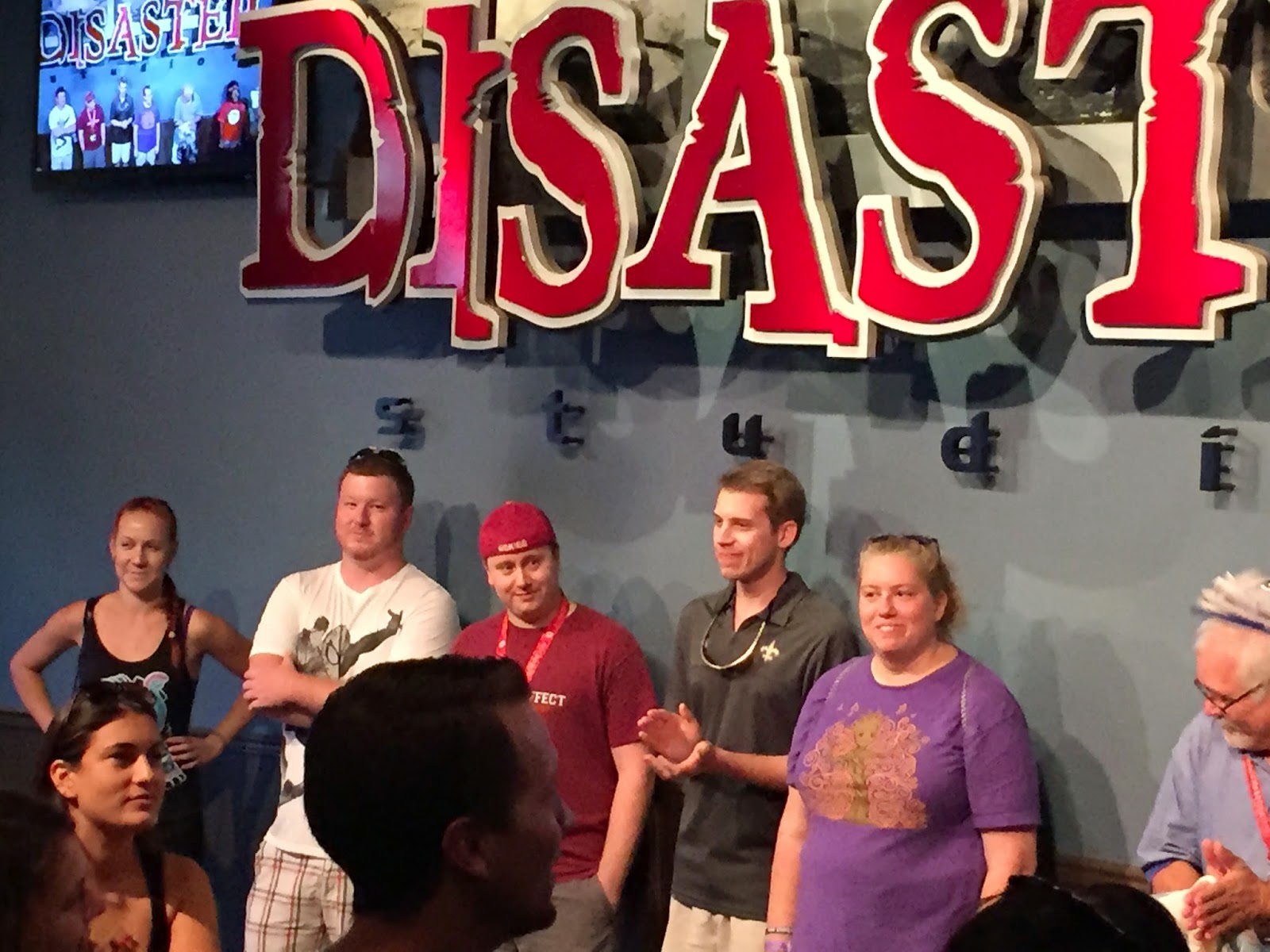 Joe, Mike, Nick, and Sean are joined by Brian from OrlandoUnited to discuss their involvement with and the results from the Saturday Six Top Universal Attractions poll. AVENGE DISASTER!

Email us at parkscopeblog at gmail dot com or follow us at Parkscope, ParkscopeJoe, CaptMichael87, ParkscopeNick, and/or Parkscope_Sean.
Posted by Joe at 10:49 PM No comments:

Email us at parkscopeblog at gmail dot com or follow us at Parkscope, ParkscopeJoe, CaptMichael87, ParkscopeNick, and/or Parkscope_Sean.
Posted by Joe at 10:37 PM No comments:


In four days, work will begin on the removal of the Sorcerer Mickey hat in the middle of Disney's Hollywood Studios. Guests who've been visiting the park since 1989 or find the hat ugly are extremely excited. The hat's removal is one acknowledgement that the park is flawed and needs a refreshed identity. While at a New Years party I discovered family friends lamenting the hat's removal and I had to defend my position. Based on those conversations I hope this post changes some of the online opinions against its removal.

The Disney theme parks have always been addicted to year long events, or celebrations. Disneyland held one practically every 5 years through the 90s, giving away cars and trips to lucky visitors. Walt Disney World celebrated character birthdays (with the addition of Mickey's Birthday Land) or the USA's Bicentennial in 1976. In 1996 WDW celebrated it's 25th anniversary by doing the unthinkable: making Cinderella's Castle into a birthday cake.

This was a first for the parks and would not be the last time. Even though the pink castle was rightly lambasted for its garish look, Disney adopted the same mentality for the Millennium Celebration in development for Epcot. To debut in 1999, the park would receive a new entry plaza, two new rides (Test Track was two years late, so it was promoted as part of the celebration), a new World Showcase pavilion, updated Innoventions, a brand new Illuminations, a new parade, and the Mickey Wand onto of Spaceship Earth.

The wand stands 257 feet high, with the numbers 2000 written across the top of the attraction. The icon was festive, visually striking, and over the top, something late 90s Disney parks wanted. Even if it wasn't 'futuristic', it did tie the remaining parks into Epcot as the 'hub' of the celebration.

On December 26th, 2000, 5 days before the end of the Millennium Celebration, Disney released a press release announcing the continuation of Tapestry of Nations parade, Illuminations: Reflections of Earth, and the rebranding of the wand. Now, the wand will say 'Epcot' "to wed a core Disney element -- the Sorcerer Mickey hand and wand -- with the futuristic vision of Spaceship Earth", to quote Imagineer Roger Holzberg. This did not sit well with people.

Since 1982, Disney has attempted to inject more and more 'Disney' and 'magic' into Epcot, attempting not to go over the top. Characters, shows, and mini-attractions were added to keep families coming back. A fantasy element looming over the icon attraction about human communication and development symbolized all the complaints of the direction the park was heading.

From 1989 till 2001, Disney-MGM Studios' Hollywood Boulevard created an atmosphere of 'a Hollywood that never was- and always will be', to quote the dedication by Michael Eisner. The shops, attractions, and 'streetmosphere' all represented the mission statement of walking through an idealized 1930s Hollywood. You could dine at the Brown Derby, talk to 1930s cabbies and directors, or shop in art deco style shops. At the end of Hollywood Boulevard was the iconic Grauman's Chinese Theater. The queue and attraction inside are themed for the date and location of the street, but once you board your ride vehicle it quickly dives into modern movies such as Raiders of the Lost Ark and Alien. The theme continues into the 1950s and 1960s once you head around Echo Lake, and the theme is removed totally once you pass under the 'Studio Gates' to board the Backlot Tour and see the Art of Animation attraction.

In 1989 it was clear Disney-MGM Studios was popular beyond belief. The park designed for half a day, and at one point positioned as having a lower admission price than Epcot or Magic Kingdom, outstripped park capacity. The Backlot Tour was shortened and the New York back lot set was opened up. Star Tours was quickly put on-line. Locations starting here towards the New York City backlot dropped the real Hollywood theme and adopted the conceit of being  movie sets. MuppetVision 3D was to be one of three Muppet attractions (if you count Gonzo's Pandemonium Pizza Parlor as an attraction) set around the idea of movie sets. A Dick Tracy attraction set in the 1940s was planned, as was an off branch of Animation Courtyard that would have  been home to 'Maroon Studios' from the Rodger Rabbit books and films. When built in 1994, Sunset Boulevard embraced the plan for Hollywood Boulevard, with a strip of period appropriate shops and locations leading up to a dilapidated hotel on the outskirts of Hollywood, several years after it was quickly abandoned.

In 1998, it was starting to become clear this plan was being abandoned when Rock'n'Rollercoaster staring Aerosmith was announced for Sunset Boulevard. Opened in 1999, it was set in 'modern' times. G-Force Records opened a backstage tour of the facility for guests. While there, you meet up with Aerosmith who decide that you're fans (right?) and decide to take you to their concert in a super-super sized limo.

In 2001 Disney announced that Disney-MGM Studios (now Disney's Hollywood Studios) would be receiving it's own celebration. The Studios would be the hub and central location for The 100 Years of Magic to celebrate Walt Disney's 100th birthday. New and updated parades were launched in all the parks, 'interactive' pins were created (sound familiar?), new attractions debuted, and a large Sorcerer's Mikey hat was built in the central hub of the park. Echoing the style of the Epcot Wand, the hat featured a flat Mickey hand and lots of sparkles.

The Hat broke up the theme, setting, and place so carefully designed over the years for the front lot. There is no way that the hat, with a pin stand underneath represents the ideal 1930s Hollywood of our dreams. The Hat was designed to sit on the riverbank in front of the park, housing the One Man's Dream exhibit, and beckoning guests into the park.

When no WDW department would pick it up, merchandise did and demanded it be placed inside the park, in a prominent location, with a shop under it. The Hat was a concession of creative and merchandise under time constraints. And just as Epcot had a heavy hand of 'Disney' fantasy placed above it's thesis, Disney-MGM Studios had one placed IN FRONT of it.

The Hat, itself, is not terrible. Locations like Disney Feature Animation and Disney Studios Paris accomplish similar design choices better by incorporating the hat into an existing building and studio lot setting. Supporters of the design state it's not that bad, that the location is the issue. This is correct. The location is the issue. It has been all along and that's the point. A location over the Animation Building would have been great, but it was not built that way.

The hat is being removed on January 7th, 2015. As the Disney's Hollywood Studios morphs into the rumored Disney Hollywood Adventure, full of Star Wars and Pixar, the hat is a remnant of a confusing time in WDW history. The 100 Years of Magic celebration was extended a year and a half due to the terrorist attacks of September 11th. Disney tried to capitalize on the celebration format in the future with the Year of A Million Dreams (giving away prizes from free ice cream to a stay in a suite in Cinderella's Castle) to Limited Time Magic. None of those following celebrations had the impact as the first several. Universal being purchased by Comcast has spurred investment into attractions and immersive lands compared to the late 90s and early 2000s mentality of limited engagements to get people into the parks.

Defenders of the Hat should welcome it's departure as a change and update to the stagnant park of Disney Hollywood Studios. Plus you'll love that unobstructed view.
Posted by Joe at 4:39 PM 2 comments: