Yes, there were people settled here upwards of 11,000 years ago, but from the perspective of European exploration, Nova Scotia was probably run into by Vikings in the 11th century, and then rediscovered for white folks by a Venetian funded expedition about 500 years later. Portuguese people showed up, then the French, and finally the English appeared and took it all over. Want a great factoid? Acadians are from Nova Scotia. Acadians speak French. Acadian and Cajun sound similar phonetically. I probably already used this in a past piece because I love it so much. It blew my mind when I found out, OK? 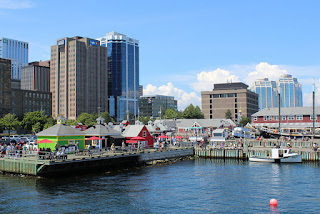 Anyways, of the 4 Atlantic/Maritime provinces of Canada, Nova Scotia is the most populated. It's home to as many people as Prince Edward Island and New Brunswick combined. OK, that's still just under a million people, but really, Halifax is a delightful and cosmopolitan city. I saw the best Bathory cover band in Canada play there after eating a rather tremendous burger, acquired comic books at a very good shop downtown, and used the Dartmouth ferry as a scenic boat ride. It was at the height of Pokemon Go, and there were like 150 people crowded around one space at the pier in Dartmouth. Just nutty stuff. Halifax also has a bunch of tragedies in its history, like the largest non-nuclear human caused blast in history that wiped out thousands of people, being near where Swiss Air 111 went down, and the place where most of the Titanic recovery efforts were based out of (and where many victims are buried.

That's a lot of sadness, so I'd like to offer some feel good stories instead. Usually a facility the size of Windsor Playland Safari wouldn't merit inclusion in one of these, but it had nearly gone out of business after the 2016 season when it was for sale for a piddly $156,000 USD. The owner's son decided to step up and take it on along with his lobster fishing business, and renamed and rehabbed the facility for 2017. There's some go-karts and a water slide here; nothing too big.

Another park that's gone through some rough times and survived is Upper Clements Theme Park. Constructed with the expectation of hundreds of thousands of visitors, it has wound up attracting a consisted 70,000 or so each summer to Annapolis Royal. I very often love to point out that a park has something that's one of a kind. When that one of a kind thing is attached to a wooden roller coaster, that's even better! Except here. You see, when their roller coaster (originally the Tree Topper, now just "Roller Coaster") was built by Bill Cobb, it was at the time that PTC was excited to offer parks a new articulating train option to better take Cobb's infamously sharp and banked corners. Unlike every other park that got these trailered PTCs, Upper Clements has never been able to afford replacing them, so they still have the worst tracking trains in all of roller coaster history. So bad that Dave Althoff once wrote about why they are complete garbage.

That's not a fair full assessment of the park though. Along with the wood coaster that tracks poorly (but has good track on it, and a kinda interesting layout), they've got a wacky train that uses a turntable to turn around and go back the same way it came instead of a full circuit loop, ziplines, mini golf that's free with entry, a really dark walk through haunted house in an actual old house, and the log flume which operated at Vancouver's Expo '86. It's a quaint park that also sells fireworks and knives in its gift shop. 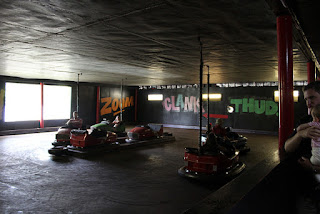 In 2017, Atlantic Playland's Rockin' Roller Coaster was changed to "SBNO" by rcdb.com - that stands for "Standing But Not Operating", leaving only one permanent coaster in the province at Upper Clements. There are still bumper cars, a steel carousel, walk through haunt, and some kiddie rides here. However, as a testament to the park's struggles, there's also several rides which are racked and covered in shrubs, as well as a whole abandoned go kart track. Things were better here once, but I suppose rides and slides (it has water slides I guess too) are inspected and thus should theoretically be safe. Less safe are the rides and slides at the abandoned Magic Valley Fun Park by New Glasgow. Closed prior to the 2016 season, an acrimonious relationship between the locality and owner wound up with the park closing its gates in relative silence.

For those seeking a historic sort of time, Fortress Louisbourg on the southern coast of Cape Breton Island (the more sparsely populated eastern half of the province) has a historic village, period costume, and all the blank gun fire and cannons you could ever desire from a national park.