If the Sandusky Register's report of Disaster Transport's closing is true, we will be losing one of the best-worst attractions around. For 22 years Disaster Transport has survived yet failed spectacularly. Past Cedar Fair CEO Dick Kinzle is quoted as saying it is the worst mistake of his career. Disaster Transport has failed to live up to the hype it initially set and, in fact, most people don't even know it's a roller coaster. In celebration of this, lets look back on this attraction's history and what is to come.

Such a great ad, isn’t it? Kid, being blasted into space from his back yard. Makes you want to go to Cedar Point in the summer of 90, right? What kind of attraction could this be? Would it be a tower ride that shoots you into space? That would come in 1998 with Power Tower. How about a personalized motion simulator like the popular Star Tours from Disneyland and Disney-MGM Studios? No, not quite. What about at least Space Mountain? It would at least be a coaster in the dark with some stars, right?

Kind of; we got Disaster Transport. And here it is! 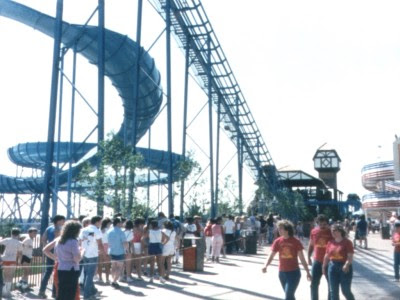 Ok not quite. That’s Avalanche Run. Opened in 1985, it awkwardly put a Swiss chalet on the shore of Lake Erie and allowed guests a chance to ride a bobsled style coaster. Disaster Transport took this ride, enclosed it, and added a, reported (but disputed), $4 million special effects package.

Disaster Transport is a great case study in theme park lore, a lesson about budget cuts, and improper maintenance horror stories. Reportedly then president of Cedar Fair Dick Kinzle wanted his own Space Mountain and Star Tours for his flagship park after a visit to Disney. Avalanche Run was chosen as a coaster to enclose as it historically had issues with being open to the elements. The project was given to ITEC Productions, the same people who did Spiderman at Islands of Adventure and several Disney productions. 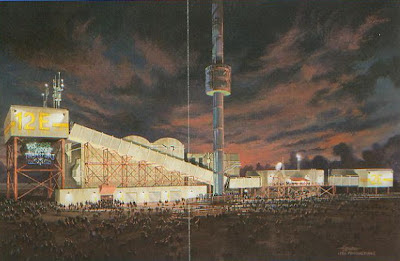 Cedar Fair set up ITEC and Disaster Transport to fail from day one. Avalanche Run was a poorly maintained ride built in a bad location; sand and water would accumulate in the troughs. As the ride was built, its budget was slashed by two thirds from the initial $4 million. Many planned effects and animated figures were dropped or scaled back. What effects were actually installed ended up being shut off, left to rot, or discarded shortly after it’s inaugural season due to budget cuts (one reported issue was a large fake asteroid falling onto the ride track during its first season). In 1995 even more effects in the queue line were shut off and rain storms damage many of the electrical systems. In 1998 portions of the queue shut forever, these rooms are used as storage or haunted houses for HalloWeekends. In the mid 2000s cheap polarized glasses were sold in the queue and disco lights added to the ride; the glasses provided the effect of stars along the ride track. Animated figures, projections, TVs, fog effects, lighting effects, props, and sound systems have been removed. 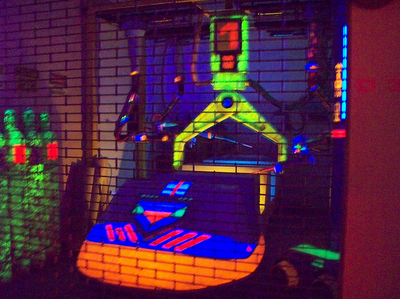 Today Disaster Transport sits half abandoned, non-functioning, and utterly confusing. But what about when it opened? Lets travel back in time to 1990 and re-ride the attraction. I have formed this ‘re-ride’ based on several first hand reports, operations cast members, press materials, and my own personal experiences with the attraction. 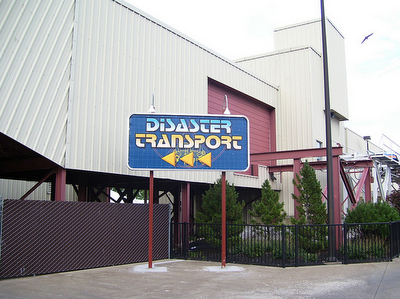 You enter the Disaster Transport building and enter a promotional holding room. Here there are posters for various destinations (all with various disasters associated with them) served by Dispatch Master Transport (the fictional company name). 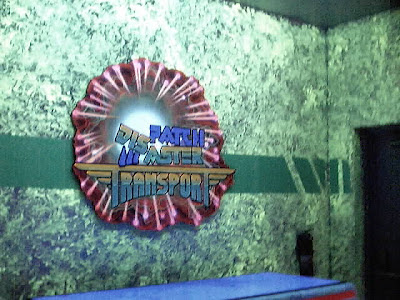 Get it now?
(Photo courtesy of Coaster-Net)

Dispatch Master Transport specializes in sub-orbital, rapid transport of goods and, now for the first time, people. “We get you there in five minutes, or we don’t get you there at all!” was their motto. Clever signs through the queue explain how this companies name plays into the attraction name.

As you stand in the holding area, a young cast member would come to a podium in the front of the room to give the story. We are the first human cargo on DMT, and we are traveling with ‘RBB-11’ cargo to an Alaskan research facility. Yes, Alaska. Of course, being the two-bit operation they are, the boarding gates are malfunctioning currently. We all will now reach the boarding area through a rerouted path through the repair and loading bays. 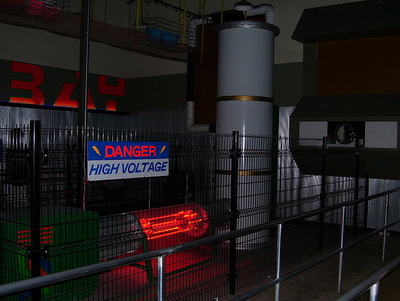 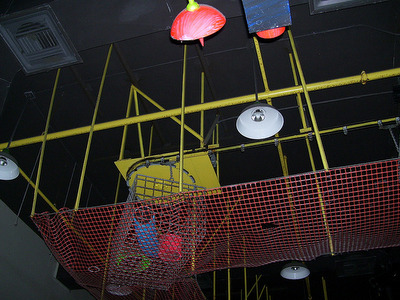 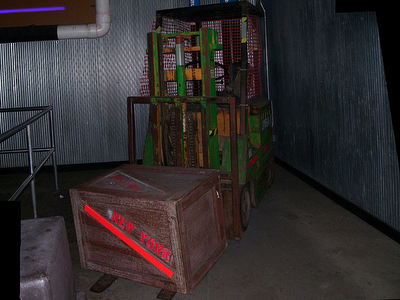 (Photo of courtesy of Andrew 94)

Here we see the inspiration from Star Tours the most. Traveling baskets overhead move cargo to be loaded onto shuttles. A robot claw repairs a glowing shuttle. Two other robots repair ships and even converse with guests. TVs show safety spiels, travel ads, and banter between pilots. Even though many figures and more complex theming was never installed, the queue line was entertaining and air conditioned.

All of the queue and boarding area for DT was ultra-violet lit, making it like a giant walk through dark ride. It also hid a lot of the cut corners in terms of theming; just paint the things you want to stand out and ignore the rest. 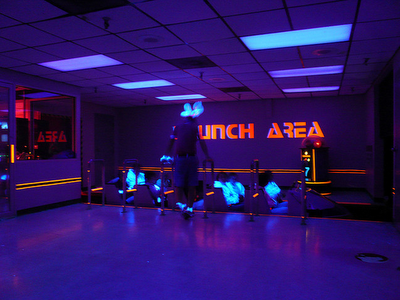 We soon reach the Launch Area. The train is a modified, high capacity bobsled train. Unlike other bobsled coasters (like at Kings Dominion) these have two per row seating, similar to Space Mountain at Disneyland. 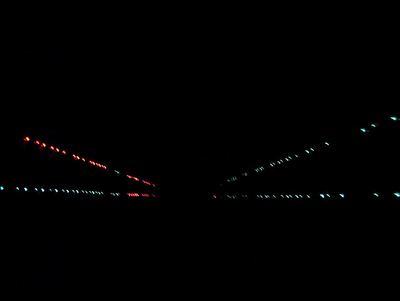 I wish I was joking when I said this was the lift.
(Photo courtesy of Andrew 94)

The train dispatches and we pause in front of the lift. Our helpful pilot robot (research doesn’t provide a definitive name, but Dave seems to be it) hangs from the ceiling. Dave gives us our route, warns about space pirates and asteroids, and then up the lift we go! Thick fog and lights around us simulate take off into the lower orbit. As we crest the hill a projection effect of a space station is shown. 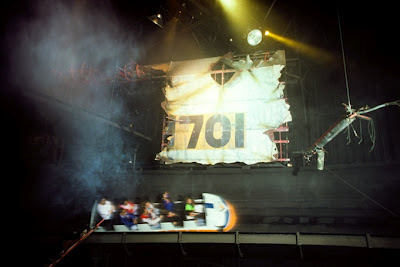 As the coaster car goes around the track, many different effects are lit up and sounds play, a cross between Space Mountain and Rock’n’Rollercoaster. Parts of space debris and space stations float around and light up as we pass. The shuttle avoids asteroids. There is even a giant satellite in the middle of the room and helix that shoots lasers. While on our shuttle trip we somehow run into space pirates (it is not clear entirely if this is show as part of the space station projection or further later in the ride) and then eventually our pilot loses control. After we regain control, go through a final turn, and hit the break run, we land in Alaska. How do we know we’re in Alaska? A mural of snow and a research outpost on a wall. I can’t make this up.

Here’s a video shot not long ago that shows you what remains of the queue and ride. Make sure to watch for the shuttle repair in the queue, the satellite in the middle of the room while on the ride, and the asteroids shortly after.

Disaster Transport is in the worst shape of it's life. The lights on the lift hill are just carnival lights; they were added later once most of the effects went into disrepair. Most of the queue is for a haunted house. Most of the lights are now just normal halogen, no more UV. The air conditioning is failing in places and the whole ride is in the dark, no attempt is taken to light the any of the props. Even the Alaska mural has been painted over.

The Sandusky Register memo quotes CEO Matt Ouimet (yes that one) saying this and the Space Spiral to be closing for a B&M Wing coaster. The new attraction will be a beacon for those entering the park, as it'll swoop over the parking lot and be visible all down the main midway. 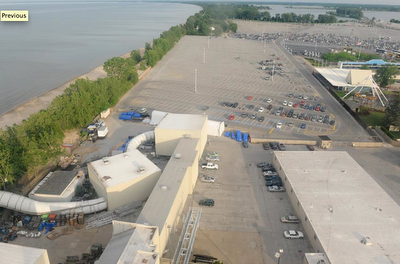 So for all of us in Northeastern Ohio who live near Cedar Point, we should all make the trip out to the peninsula for one last ride. The red-headed step child of coasters in Cedar Point needs more love; it’s a relic from a by-gone era where everyone was getting into the themed entertainment race. I hope to see you at America's Roller Coast for one last ride to Alaska.


Cedar Point has confirmed the closure of Disaster Transport and the Space Spiral. Final day of operation will be in two weeks, 7/29/2012. The last rides will be auctioned off, with the money going to Give Kids the World charity.