Disney-MGM Studios is probably the oddest duck in the Disney Parks empire. It was created in fire, through a particularly horrible mud-wrestling contest between Michael Eisner and Lew Wasserman, and never really reached even a fraction of its potential. It’s actually astounding that it garnered a higher attendance than Animal Kingdom until 2006, despite having no main differentiators like the pull of the real-life animal enclosures. It set the stage for decades to come as being a Michael Eisner park through and through, with budget cuts and confusing future . I think the most astonishing thing about this “making of” special is the fact they were able to fill 53 minutes worth of content!

All the official Disney propaganda would have you believe that Disney-MGM Studios was created when Michael Eisner and Frank Wells took a trip through the Glendale Imagineering HQ and thought that the “Great Movie Ride” would make a great central attraction for a theme park themed to Hollywood and the movies, rather than what it was originally destined to be, which was an EPCOT Center pavilion next to Imagination. The Disney executives then all held hands, cavorted through flower beds, and sang good Christian songs as the innocent Hollywood park was built. By most accounts, the creation of Disney-MGM Studios was much more insidious.

As witnesses have attested, Lew Wasserman (then head at Universal) was shopping around the idea of creating a Universal Studios in Florida to bask in the success of Walt Disney World, which opened in 1971. Throughout the 1970s and 1980s, Lew was passionate about the idea of turning Orlando into Hollywood East, and a Universal Studios would help this image by offering movie and TV studios lower taxes, lower costs on materials and housing, lower wages, and the opportunity to avoid the Hollywood unions. As Lew would envision it, Universal Studios Florida would have a Disney-style theme park along with a working soundstage and backlot area, where real movies, TV shows, and commercials would be filmed. The problem was, Lew was also a notorious cheapskate. Even though he was passionate about the project, he refused to have Universal pay more than half the cost of the new park. So, he visited the executives of other movie studios to pitch them on the idea of investing in the new park (for real, think of the umpteen-millions of dollars Universal lost by not building the Florida park a decade earlier than it did!)

One of the executive teams he visited was the Paramount team. This team consisted of studio head Barry Diller, along with…Michael Eisner and Jeffrey Katzenberg, who were major studio executives at Paramount at the time. Paramount ultimately turned Universal down on the prospect of investing in the park.

Eisner and Katzenberg would migrate to Disney in 1984 (after Wasserman told Eisner over the phone that he was “stupid” to go to Disney). And, lo and behold, a year after their terms began, Eisner and Katzenberg came up with a crazy new idea for a Disney Studios theme park, with rides and a working soundstage/backlot area! Amazing!

Wasserman of course was furious. Disney denied the allegations from Wasserman that Disney stole Universal’s idea, and instead concocted the Great Movie Ride story. So began an arms race to build the first studio park in Florida.

Unfortunately, both companies had problems. Wasserman still didn’t want to pay for the entire Universal Studios project. And Disney, well…didn’t have any movies to make any rides out of.

Strange but true, folks (channeling me some Jim Hill there). Remember, in the mid-1980s when the Disney Studios project was announced, Disney’s major hits were almost all animated movies. Besides these, Disney’s only movies that could be considered major hits were Mary Poppins, 20,000 Leagues Under the Sea, Swiss Family Robinson, The Absent-Minded Professor, and The Love Bug. Hardly the material for an entire theme park’s worth of attractions. So Disney had to spend time to find a deal with another movie studio to gain the rights to their material.

Eventually, Disney was able to strike a deal with MGM, makers of all-time classics like Singin’ in the Rain, Gone With the Wind, and The Wizard of Oz. They announced that not only would the Disney-MGM Studios be moving forward, but that there would be multiple Disney-MGM Studios, specifically in France and in Burbank. Michael Eisner loved the idea of a “movie park” so much that he wanted it duplicated in as many places as possible.

Eisner’s aggressive tactics to target the Disney-MGM Studios Burbank project in Universal Studios Hollywood’s backyard enraged Wasserman to the point where he dropped his own stingy demeanor (seriously, this would be like Walt Disney’s moustache spontaneously falling off) and decided to go ahead with Universal Studios Florida, with Universal paying 100%. Both companies were determined to open their park first.

Unfortunately for Universal, Disney’s far greater experience in the theme park arena ensured that their park would open first. But it was not without paying the price. To hurry along construction, only two rides at Disney-MGM Studios were ready for opening day (the Great Movie Ride and the Backlot Tour). The Indiana Jones stunt show was not ready for opening day and had to open several months late. All other attractions were show or tour-based attractions, much cheaper and easier to install.

This lack of things to do did not go unnoticed. Guests swarmed Guest Relations with complaints as to how small the park was and the fact that they had to pay full admission for a half-day park (sound familiar? Disney really doesn’t learn its lessons does it?). Remember, this was before Star Tours, so the entire park terminated at Mickey Avenue (where Voyage of the Little Mermaid is now) for the Backlot Tour, and there was no Star Tours or MuppetVision on the other side. And no Sunset Boulevard. And New York Street was a closed set and available only on the tram portion of the Backlot Tour. That, my friends, is a tiny park. And why I’m continually impressed how Disney was able to fit 53 minutes of material into the making of the park, especially when the opening-day attraction lineup could barely deliver more than 53 minutes of entertainment! Wakka Wakka!


Bu that's not today's story. No, as Jeff said, this story is about Disney-MGM Studios. 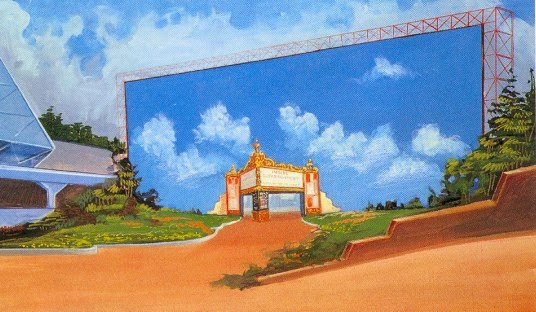 The concept art always looked too crisp, too precise, too... 80s.

Disney-MGM Studios has been a a park at war with its own success and ambitions. A park born in the fire of Michael Eisner and died under his own cooling power; the park was on the brink of a major power play with The Muppets, Maroon Studios, Dick Tracey, and more before Eisner's own decisions brought all those plans down to the ground.

This special highlights the beginnings of this vision hosted by one Fred Newman. While he might not be a household name he did work with Who Framed Rodger Rabbit. But he's probably best know by us millennials for a later show he did..

Sorry I had to get that out there.

Posted by FiddlersGreen at 8:47 PM