Statler: “Boy, he’s really good, that Rudolph whatshisname…you know, I should really learn how to pronounce his name.”
Waldorf: “Don’t bother. After this show, he’ll probably change it.”
Dateline: Disneyland is fondly remembered today as being an unmitigated disaster. One of the most curious happenstances of the show is the fact that, knowing the Orwellian attitude of Disney’s corporate overlords today, the show is even mentioned at all. But it cannot escape the modern geek, with it being available on free media everywhere in all its (lack of) glory. 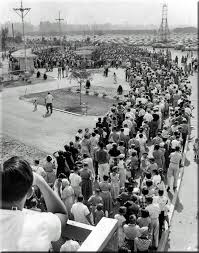 One should not begrudge Disney for such a catastrophe, however. After all, it bears mentioning that live TV had barely been tried at all by this time. TV was such a brand-spanking new medium, the entire industry was still working out the limits of human organizational skills as it discovered the hard way that split-second timing was needed between the cameramen, sound team, and actors for the length of an entire show to pull off a seamless experience. Now, pretend instead of a small enclosed studio, your live broadcast is at a 100-acre public space as busy as Grand Central. As they say, hilarity ensues. But, this is really to be expected, given the novelty of the television medium at the time. And one should at least give Walt his due: when he fails, he fails hard. No focus groups and surveys and “let’s run this by Legal first.” He puts his whole back into it. Like there’s a Walt Disney-sized hole in the wall. And those are the most spectacular of devastations.

It’s no surprise that Walt would eventually run into cultural pothole. Indeed, we forget that Walt had recently taken quite a few high-stakes gambles and won. There was the return of the full-length animated movie (Cinderella, which remember are pretty expensive to make), the creation of his own live action movie studio, starting a series of nature documentaries just for the heck of it with his studio in debt, deciding it would be a great idea to jump headlong into a completely unproven medium (television) that the other movie studios were avoiding like the plague, the continued cost overruns on Sleeping Beauty (the most expensive animated film ever made up to that point), and the re-filming of Lady and the Tramp and 20,000 Leagues Under the Sea at enormous expense when 99 out of 100 people would say he didn’t have to. So yeah, I’d say he was due.

Having set up the park for 11 straight months in his Disneyland TV show, all Walt had to do was show the world it was actually open. And for Walt Disney, lover of nonsensical parades (we’ll get to that) and movie premieres (see: the Snow White premiere), he would not be satisfied until Barnum and Bailey and their sister Sue knelt down and begged for mercy. This thing is an incredible tour de force that looks at once like the Olympics opening ceremony, Woodstock, a Tokyo subway station, and the Tailgate Lot outside a Packers game. Here are a list of things that went wrong that day (note: outside the broadcast) inside the park, in no particular order: the plumbers went on strike, causing Walt to skimp on drinking fountains (leading to his infamous “people can’t pee in the street” barb); it was over 100 degrees; the concrete was newly poured, causing women to get their high-heels stuck on Main Street; counterfeiters swarmed the park wielding fake invitations; enterprising entrepreneurs hitched ladders up to the berm and charged $10 for people to hop the fence; there was a gas leak in Fantasyland; the Mark Twain was so full it began to sink; James Mason got into a fistfight trying to get his daughter on the carousel; Sammy Davis Jr. rammed Frank Sinatra on the Autopia; and the effects on themed rides from Mr. Toad to Jungle Cruise decided to stop working halfway through the day for no particular reason. But Walt put his best foot forward. Each land would have some sort of celebrity involvement (except Adventureland, screw those guys): Davy Crockett and Annie Oakley in Frontierland, a bunch of (famous?) scientists in Tomorrowland, Disney characters in Fantasyland, and of course Art, Bob, Ronnie, Walt, and the governor of California to host. Each land would be given a thorough examination by the TV cameras, beamed directly into every American family’s living room. And look, there’s Danny Thomas in the parade! And Frank Sinatra driving in the Autopia! Why, there are celebrities everywhere.

It's all just mind-blowing entertainment, like watching a Super Bowl halftime show be interrupted by Wile E. Coyote while narrated by Jesse Ventura and Johnny Carson. And now, Walt Disney Proudly Presents…


Ah Dateline Disneyland, this is a mess as I remember. Walt talks, there are parades, guests, collisions on the Autopia, and other general insanity. I have not seeing Dateline Disneyland in years, so I’m jumping into this a little blind. It’s 7:30pm on a Friday, I got paid, got a raise, have a Mai Tai, and some chips & salsa. LETS DO THIS!

Here's the YouTube Link again in case you were too drunk to see it or something
Thanks for reading and watching with us. Tube in next week as Parkscope YouTube Tuesday continues!
--Jeff (@ParkScopeJeff) and Joe (@parkscopejoe)

Posted by FiddlersGreen at 7:47 AM