I've been a Nintendo fan for over 20 years now. I'm looking out from my living room couch at my Nintendo Switch, N64, Wii, and Wii U. In my bedroom is a 3DS XL and I've previously owned a GameBoy Color, GameBoy Advance, Nintendo DS, and DS Lite. In college I nearly lost a semester to perfecting my Mario Kart Double Dash game (Birdo & Yoshi FTW) and I waited all day for a Wii at a Walmart in Dayton, Ohio. I'm only slightly bragging but mostly enthusiastic for Super Nintendo World news. I've known about mall tours and a one off stint in the 80s at The Disney Village Marketplace, but Nintendo has never had a theme park presence like this.

I can and probably will get into a longer discussion on podcasts, twitter, forums, and here about how this is the next Harry Potter for theme parks; a property loved and celebrated that has seen little theme park coverage that will expand the customer base of the parks and attract existing theme park fans. Instead today lets cover some of the known knowns and some intel we've received.

First, Osaka. Universal Studios Japan will open the first Super Nintendo World in early 2020 prior to the Summer Olympics. The project will cost 60 billion yen, or roughly $545 million USD; for comparison all of Hogsmeade in IoA, Diagon Alley, and Hogwarts Express cost roughly that amount.  The one confirmed attraction, Mario Kart, will use state of the art technology to recreate racing through the courses found in the game. But unlike the game you will not be seeing this on a screen. To summarize a design motto of the whole project: "If guests wanted to see these worlds on a screen they would be playing it on one of our consoles." This is Nintendo video game worlds come to life, not "ride the movies". The second attraction in Japan is expected to be a high tech dark ride using innovative "omnimover" ride vehicles themed to the Yoshi games.

So what about stateside? Hollywood will be getting a Super Nintendo World, but details on our end are sparse. We expect a copy of the Osaka land to open in Hollywood with an opening date dependent on when the Summer Olympics happen in that city. With Comcast's cash and ambition I do not expect a six year turn around between Osaka and Hollywood for Nintendo like that happened with Hogsmeade. But where will the land be located? Again we're not sure, but with Universal expanding the Starway it could be expected to open up on the lower lot replacing many Sound Stages currently being removed.

Orlando is where things get interesting. Projects have settled into place and Super Nintendo World is looking to open in 2021 at Universal Studios Florida. Mario will be evicting Barney, Curious George, Animal Actors, and possibly the existing parade building to build an expanded Super Nintendo World. Orlando will offer the Mario Kart and Yoshi rides in addition to the much rumored Donkey Kong coaster concept rumored and previewed in patent filings. Similar to the mine kart segments in the Donkey Kong Country games, guests will race through the jungle and make impossible jumps (see below) as they try to get Donkey Kong's bananas back from King K Rool (we can only imagine that'll be the story). 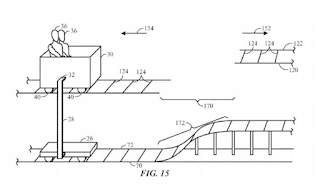 Universal is pushing the interactive elements of the Wizarding World even farther in Super Nintendo World by incorporating Nintendo's own products into the land. Shigeru Miyamoto has stated Nintendo Switch functionality will be incorporated into the lands. We're not sure how so it will interact with the land, such as exclusive games or character skins. Frankly, I think it's a bad idea to design a permanent land around a $300 piece of technology that has lifespan of five years before a new $300 object, with different inputs and requirements, is released. Remember the Apple Lightning Cable was only introduced five years ago. Even without a Nintendo Switch the land will be full of piranha plan AAs, moving coins, and "Start A" buttons to press.

Food and beverage is now a staple at any amusement park with Pandora's wine and even Cedar Point's beers by BrewKettle. Nintendo will be no different and may even step the game up as the food offerings at Universal Studios Japan and around the country are more intricately themed than in the USA. It's interesting to see if Japan's kawaii designs will make its way to the states in a spurt of "authenticity" or if local chefs might reimagine the offerings.

This fall I'm excited to visit Pandora, in 2019 I'm very excited to see what Disney cooks up for Star Wars, but nothing touches my excitement for Nintendo. Please stay with Parkscope and our podcast over the next few years as we approach the opening to Super Nintendo World.
Posted by Joe at 8:05 PM