Like everyone in the amusement community, we here at Parkscope are horrified by accident that took place at the Ohio State Fair earlier today (July 26th). Because lots of misinformation hits the net and straight up exploitative view-grabbing pieces find their way to your eyeballs, we wanted to take a moment to try and give you a little better perspective here. 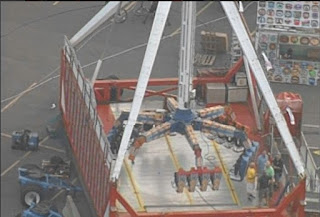 The ride in question is known as a KMG Fireball or KMG Afterburner. KMG is a Dutch firm who primarily builds portable rides, though they have park models as well, and they have an outstanding overall safety record. Their attractions all meet the very high TUV standards for safety that are often considered the gold standard in the amusement and theme park industry. Amusements of America is the carnival provider for the Ohio State Fair, and while they do book in a number of independent attractions and other carnival operators to help fill the midways, this ride belongs to them. Last year, the Moonraker ride they had brought in to the Delta Fair in Tennessee had a malfunction, injuring several riders. However, that ride was contracted in from Belle City Amusements, and was not owned or operated by them. Also, a Polish copy of the ride had a similar accident in Toledo, Spain back in 2013. However, it was not a KMG ride.

Video of the accident exists, but does not show the exact moment that the seats decoupled clearly. The aftermath is, however, clearly evident and horrifying - seat restraints release immediately, bodies crash into the spinning arm and then are shot out as projectiles to the midway. 1 person has died, multiple people are critically injured. Confirmation as to whether or not the deaths and injuries are solely to riders or involve people on the midway observing the ride is unknown at the time of this writing.

In discussing the accident with other hobbyists who know a thing or two about these attractions, one of them made some very interesting points. I thank Mike Parker for his time (and pictures) - 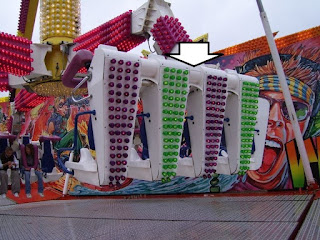 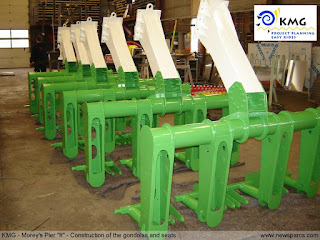 At some point down the line, KMG moved the weld point further up the arm. You can see here from the pictures of Morey's Piers' "It" attraction that it is now located just above the seat assemblies themselves. Based on existing documentation of KMG service bulletins, there have been no specific notes made about ultrasonic testing finding stress fractures or cracks where the seats/gondola meet the arm, though service bulletins related to the arm and restraints having stress fractures has occurred.

Annual inspections are required by a "Level 1 or higher Non-Destructive Test (NDT) Company" are required for all welds on KMG's pendulum rides. Whom is contracted by Amusements of America is not known, however it likely would have been subjected to ultrasonic testing at some point during winter quarters. At this point there, there is can be no doubt that there was a catastrophic structural failure with the arm. Questions of how and when will likely take months to fully determine.

UPDATE 7/27/2017: As one would expect, KMG Fireball/Afterburner rides almost everywhere are to stop running almost immediately until this accident is evaluated. Poster "distroyer" on themepark.nl provided this shot of the ride - source was not revealed. 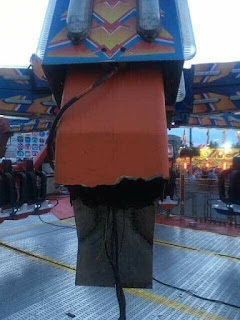 Dave Althoff wrote about a similar issue that affected the KMG Remix ride back in 2002 at the Ohio State Fair, leading to the ride being effectively banned from the premises and two riders being injured. He points out how the Fireball differs in construction. As you can see from the photo above, however, the point of failure was well above this.

EDIT 7/27/17, 11:35AM EST - At roughly 9AM EST, KMG Europe BV's Facebook page indicated that they would be issuing an official announcement later related to the accident and that "thoughts and prayers are with all involved."

Tyler Jarrell, 18, of Columbus, was killed in the accident and declared dead at the scene. For reference: people are rarely declared dead at the scene of any accident unless their injuries are so grave and unsurvivable that there is no reason to transport them. Tyler may have been the victim seen not moving in footage and pictures released in which legs are seen on top of the seats. An individual matching his age and location has a Facebook account indicating he had recently signed up to join the Marines. It is not confirmed that this is the same individual.

The following people were injured. Based on what information we have from Ohio State Medical Center, we know that three of these people are still hospitalized in intensive care and require additional surgeries and long rehabilitation periods. Those reports seem to suggest that two of these people are those starred below. Three additional people were sent to Grant Medical Center, and one individual is still in critical condition there. A child was treated and released from Nationwide Children's Hospital: it is assumed but not confirmed that it is the 14 year old listed below.

EDIT 7/27/17, 1:35PM EST - KMG has issued a statement indicating that the gondola had detached from the swing arm and that all KMG Fireball/Afterburner rides and Move-Its are to be shut down with the exception of those Fireball/Afterburners with serial numbers 40 and over. 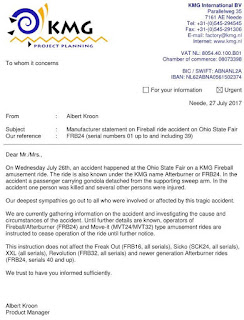 Amusements of America's Fireball was Serial # KMG98FRB24006. The photo shown of Morey's under construction with the different bent for the gondola is of a later model, serial number KMG-2011-FRB-24P-162.

EDIT: 7/27/17, 4:30PM EST - Tyler Jarrell, the 18 year old victim who died at the scene, had signed paperwork for his intent to join the Marines and participated in the Columbus Police Explorer. His girlfriend, Keziah Lewis, has undergone multiple surgeries for injuries to the pelvis, ankle, and ribs, and was informed following surgery of his passing.

WBNS Channel 10 in Columbus, an affiliate of CBS, has posted the State of Ohio certification documents for Fireball on their website.

The State of Tennessee through the Tennessee Department of Labor and Workforce Development has banned the KMG Fireball from setting up in the state.

EDIT: 7/28/17, 10:00 AM - Several riders who have been released from care have done interviews with local news. Abdihakim Hussein was on the ride when he was injured by debris & people ejected from the ride when the gondola across from them broke free on Wednesday evening. He has a small neck fracture and is currently in a neck brace. Jacob Andrews and Jennifer Lambert, injured in the accident, were non-riders who were struck by debris. Jacob Andrews was reportedly injured in his leg, while Lambert was struck in the back of the head. Lambert was still listed in critical condition as of late July 27th.

As we reported first and they showed in a subsequent photo, there was a significant change in weld design for the Fireball. This redesign likely makes it that water cannot flow/be held in the weld point, which might cut down on corrosion and certainly be easier to visually inspect than what previously existed.

Additionally, the family of the deceased victim has filed a wrongful death suit in relation to the accident.

First, the most important thing is the well-being of the victims. All of the critically or seriously injured people from the accident are still inpatients in similar/identical conditions at area hospitals. Jennifer Lambert is reported to be in a coma by her parents. While this may be remembered as an accident that "only" killed one person, the final toll may not be known for years.

Second, the ride itself. Investigation has largely concluded. The cause of the accident is the corrosion, which happened over a long period of time as water seeped into the empty space in this connection. 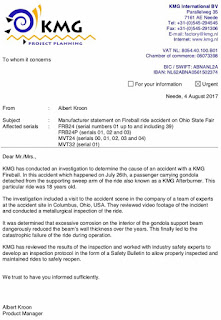 What does this mean? Well, all rides in this run (Serial #s 1-40) will likely see new gondolas need be attached before they return to service, or at the very least a very in depth inspection of this space and perhaps others on the rides.
Posted by Alan Conceicao at 11:12 PM