Dragon Challenge is closing at the end of the operating day, September 4th 2017.
Dueling Dragons opened with Islands of Adventure in May 1999. Islands was designed as a counterbalance to the Universal Studios Florida park; where USF had large indoor E Tickets set in a studio lot theme, IoA focused on outdoor coasters, water rides, and family flat rides clustered in themed “islands”. The two parks complemented each other and their close proximity allowed for guests to quickly jump between parks.

Lost Continent, unlike the other islands in the park, was not based on a copyright or commercial property but based on mythology. The first part of the island focused on Greek and mediterranean mythology with the The Eighth Voyage of Sinbad, Poseidon's Fury, and Mythos. The second half of the island was based on European mythology and was called Merlinwood. Here guests found the Enchanted Oak restaurant, the Flying Unicorn a few years after the park opened, and finally the land’s biggest and iconic ride: Dueling Dragons.


Dueling Dragons was unlike any B&M Inverted Coaster in the world. The inverted coaster design was hugely successful and popular but this new design stepped up the game by having two separate layouts duel. The two sides of Dueling Dragons would swoop over and under each track and make many close calls, including the famous foot chopper dueling loop.

Guests entreated the exterior queue under the iconic fire and ice dragon sculpture. The path winds up and around to a derelict castle with a small bridge for guests to cross before entering the castle. Inside the castle three stain glass windows tell the tale of the castle, the warriors who came to fight, and the dragons who live there.


Further and further into the castle guests pass the remains of the knights who've attempted to slay the dragons, including one suspended and encased in ice. As the queue continues guests enter the catacombs full of skeletons, skulls, rib cages, and bones. Loud, ominous music and sounds come out of cavern holes and locked doors. This is the final warning to not proceed further to the loading platforms. 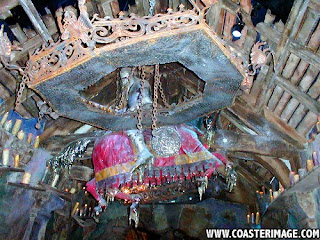 In 2007 Universal announced The Wizarding World of Harry Potter to replace Merlinwood and expand the park into an expansion plot originally designed for a Jurassic Park jeep ride. Enchanted Oak would be updated and redesigned to be the Three Broomsticks, Unicorn would become Flight of the Hippogryph, and Dueling Dragons would become Dragon Challenge. During this change the queue would be stripped of all its creepy aesthetic and replaced with some Goblet of Fire props and light Harry Potter theming. The coaster would duel until 2011 when an object fell from a train and struck a guest. After then the trains would be staggered and no longer duel.

Parkscope has heard about a Dueling Dragons replacement for some time. Reportedly B&M are not happy the coaster no longer duels and Warner Bros are not happy about the use of metal detectors before riding. Information started coming through in 2016 suggesting Universal Creative was actively working on a replacement attraction(s) and designs for an expansion to Hogsmeade.

The Dragon Challenge plot is huge, it equals roughly the same size as the existing Hogsmeade area. Why didn't Universal remove the coaster when they built Hogsmeade? Universal didn't have the money or time in 2007-2010 to redevelop such a large area. At that point in time the resort was struggling and this was a Hail Mary pass to increase profits and look better for a potential sale (both happened). 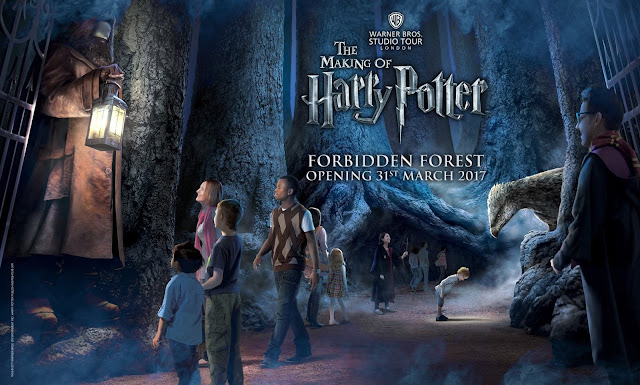 With such a large area, what do we expect to see here? Well it's nearly a lock the new addition will be of the Forbidden Forest, which just opened this past March at the WB Studios Tour in London. Lots of real and fake trees will line the paths to the attraction and give the Hogwarts Express station more ambiance. We will see a new roller coaster, but beyond that not much is known.

Where will the entrance to the land be? The first reaction would be to say where the current Dragon Challenge entrance is, but what about outside of Hogsmeade? Something closer to Hogwarts Express would alleviate congestion and spread out crowds. What about closer to Flights of the Hippogryph and Forbidden Journey?

One of the complaints of Hogsmeade is the small walkway and congested guest areas. More walkways, shops, and interactive wand stations could be added in the former Dragon Challenge plot. 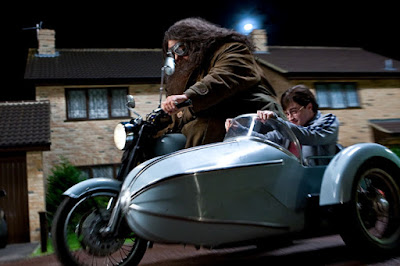 Finally, what about the ride? We are still in the dark with the ride system and experience. Rumors have pointed to either a hyper coaster, Vekoma motorbike/side car attraction, a Dynamic Attractions SFX Coaster, or a powered inverted Mack coaster. The Universal press release has officially stated we'll be seeing creatures and characters in the attraction and rumors suggest Creature Technologies are working with Universal Creative again on new AA figures. Will the coaster be all outdoor, indoor, or a mix?

At this point we believe the ride will be the Dynamic Attractions SFX Coaster with large show scenes, indoor coaster segments, and audio animatronic figures. One of the major issues and complaints of Islands of Adventure has been that most of the park closes when it rains. Reign of Kong helped even out the line up to provide an indoor attraction on the left side of the park and this new attraction could do the same on the right side. Universal hinted the attraction will "redefine the category" and "most-highly themed coaster experience" they've ever created. We think the Dynamic Attractions SFX coaster fits that bill.

Hopefully Universal won't keep us hanging for long and update us soon on this project and Super Nintendo World.
Posted by Joe at 10:24 PM