The end of a year a time of retrospectives and remembrances. We sit around a tree, candles, table, or aluminum pole and talk about the past year with family and friends. Some tend to take the last few weeks of the year to write or produce retrospectives for their jobs. We look back and remember the fond times and hardships we've gone through. When sadness creeps its way into the holidays through regret, loss, or post-holiday depression these look backs can take an even more important meaning. The happier times gives us hope for a more positive future.

This is a post about a show, one that I had a good time with this year and one I will be having a good time with in 2020. It's a simple show with a long history that seems to operate out of view of the contemporary theme park management style. I even hesitate to post about it because it always feels on the edge of being closed or co-opted into something more synergistic.

I am talking about Universal Orlando's Horror Make-Up Show. 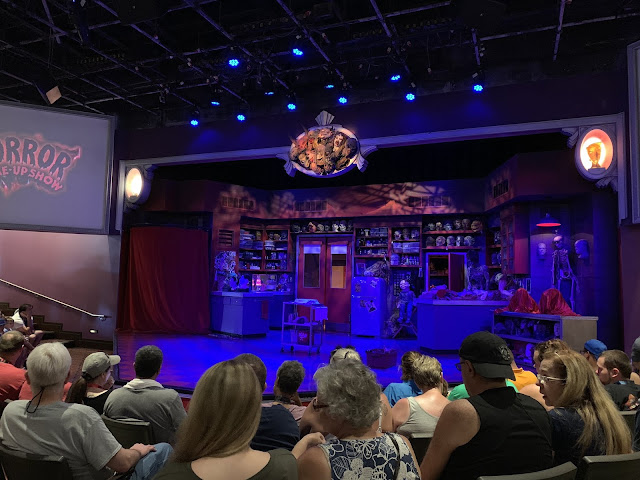 A weird thing happened in the late 80s to mid 90s. As technology quickly advanced many people were wondering how new visual effects were created for television, movies, and advertisement. With consumer grade internet access still in its infancy many turned to TV specials or programs, such as How Did They Do That?, to answer their burning questions. Of course during this time both Disney and Universal were creating their own entertainment studios theme parks and attractions, so why not throw in some making-of focused attractions?

Universal was running the popular Universal Studios Hollywood park for decades and was readying a new park for the Orlando market. Disney, too, was infamously developing their own competing Orlando studios park which borrowed heavily from Universal's Hollywood offering. Out of these three parks one type of attraction stood out: the multi-host "Making Of" show. Disney's Monster Sound Show, Superstar Television, and Backstage Pass attractions leaned on equal measures hosting chops, audience interaction, and humor to sell the attractions. Of course it helps such a show is very easy to develop compared to full scale rides, something this quickly assembled park needed when it opened in May 1989.

Universal opened their park in June 1990 with four of their own making-of shows: Nickelodeon Studio Tour, Murder She Wrote Mystery Theater, Alfred Hitchcock: The Art of Making Movies, and The Phantom of the Opera Horror Make-Up Show. Each tackled an aspect of film or tv production, whether it being editing, sound design, sound stage production, or visual effects. Even the Earthquake attraction featured aspects of this making of too, but was in service of the main ride component. These shows were reliable people eaters, something that couldn't be said of opening year attractions at Universal Studios Florida.

Horror Make-Up started as a tie in to The Phantom of the Opera, where the Phantom appeared in the lobby, shaking chandelier and all, to welcome guests to see how effects were made. The Phantom was eventually removed; the old stage he appeared on is still there now with a flat screen TV to show off the latest effects heavy Universal movie. Over the years the set and show would see modest revisions but a major overhaul in the late 2000s totally rewrote the script and special effects featured. The lobby added examples from films such as Jurassic Park, The Mummy, and even Halloween Horror Nights. The new version of the show covers the history of make-up effects, prosthetics, fake knifes, computer generated imagery, and mechanical effects. 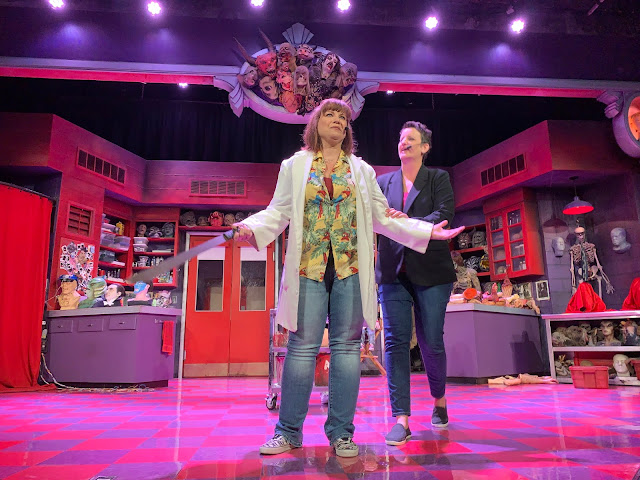 While Horror Make-Up features less pure audience participation and education compared to similar shows of its generation the dual personalities on stage is a much stronger hook for guests. Host Alex Ross and personal friend/make-up effects artist Mark/Marty James act as foils to each other which reassures the audience and opens them up to participation. Alex is more the straight man of Mark/Marty's goofball persona but both get equal joke time. For example a demonstration on fake knifes has Alex telling Mark/Marty to warn the kids about playing with knifes; Mark/Marty reminds kids everything they use is fake, plastic, or "both, like the Kardashians". Thanks to a loose script the jokes flow naturally and each show offers new surprises including topical references, audience jokes, and actor personalization.

Superstar Television shut down in the mid 90s and is now home to a Frozen live stage show, which ironically also features a dual comedian set up. Monster Sound Show closed around the same time and is currently being retrofitted to show Mickey shorts. Nickelodeon moved their production to the west coast in the early 2000s and part of the building is home to Blue Man Group. Murder She Wrote was demolished for Transformers: The Ride. Shrek 4D now resides in the old Alfred Hitchcock attraction. Even Disney's large behind the scenes tram tour was demolished for Star Wars and Toy Story.

Horror Make Up is the only one to remain open.

The fall of the making-of theme park show can be contributed to several things: the rise of DVD making-of features, the increase in "computers did it" explanations, dated references (Backstage Pass featured Dick Tracey and Honey I Shrunk the Audience), old demonstrations in the shows, stale content delivery, and a desire for more rides. Many of these shows felt stuck in the early 90s and were quietly replaced. Horror Make-Up remained thanks to its chemistry on stage and the ability for the cast to improvise.

Going into its 30th year of shows the Horror Make-Up Show is one of the few remaining making-of attractions left anywhere. It is now a cult classic attraction, a true hidden gem at the resort with its sharp wit, fun education content, and hilarious audience participation. As the parks change and evolve this show has remained a bedrock of Universal Studios Florida.

So from all the fans of the show to all Team Members and creatives who have worked on the show: thank you for your hard work and this unique attraction.
Posted by Joe at 8:13 PM