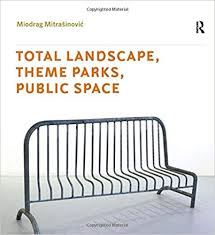 Published by Ashgate (an academic book/journal publisher, now since absorbed into Informa) in 2007, Professor Mitrasinovic's book lets you know the ground rules of what it will and will not cover very early on and how. This is a book intended for an academic audience; it is a book about theme parks, theming, and public space, it is about the concept of "Total Landscape", and it is not about solutions, alternatives, etc. It is meant to be a novel criticism different from Vinyl Leaves in that it expands on not just looking at the impact of theme parks in and of themselves within their own corporate structures and pop culture, but the way in which the "theme park model" has become inexorably linked with public space development post Reagan/Thatcher neoliberalism.

Dr. Mitrasinovic is not a sociologist, but rather an architect and urbanist who has studied in his native Serbia, the Netherlands, and ultimately the US. Today he has a lab at the Parsons School of Design, which is pretty much as close to peaking in the context of that academic field as you can possibly get. Should you have not heard of Parsons, take a look at this list of famous alumni on Wikipedia: Hitchens, Kerouac, Tennessee Williams, Shimon Peres, Norman Rockwell, Marc Jacobs, Marlon Brando, just, you know, some of the most important artists in modern history. Past faculty isn't any less impressive: W.E.B. Dubois, Derrida, John Cage, Robert Frost, John Maynard Keanes, Bertrand Russell, Frank Lloyd Wright. That second list is the group in which Dr. Mitrasinovic winds up being placed. When you are in a role that has previously been filled with titans of their space like a Charles Tilly or Slavoj Zizek, it is fair to say that this not going to be a picture book, nor is it some sort of Mitch Albom-like aw shucks fluff.

I wouldn't call this a "theory" book though it most certainly is as much of the book is also review of the subject. The theory brought to the table is "Total Landscape"; which was the original title of the book long before theme parks were even intended to be the target. Total Landscape refers to the definition of totalizing; comprehend in an all-encompassing way. Theme parks, especially Disneyland, sell reassurance rather than escapism as Imagineer John Hench is famed for saying. Mitrasinovic suggests that they sell far more than that: they so alter psychology that they relate socially conservative concepts about family and relationship to the state with consumption and social activity simultaneously. The author effectively uses the first three chapters to state his case relating "themeparking" and "theming" as separate things before doing an enormously indepth autopsy of how precisely theme parks are framed to do what he says vis-a-vis Japan's massive Huis Ten Bosch. No writer in history that I have seen, even among the imagineering books out there, is so detailed in breakdown and analysis of the exterior design and landscaping of a theme park as Dr. Mitrasinovic is in Chapter 4 of this book. Chapter 5 then discusses how theme parks were then used as the basis for reforming public spaces from the 1970s and forwards: Bryant Park receives a similarly in depth review.

Do I Want This: If Judith Adams' book was too much reading for you, you might as well not even try to obtain a copy of this book.

How does it read?: Phew. Buddy. Pal. It isn't a narrative or a story. It's kinda like a 200 page essay where the beginning and conclusion kinda sorta say the same thing and the middle is just establishing the case for why this is true. Every term in here is defined. Everything. You can't just breeze through this fucker and think you'll get 100% of what he's saying. You're gonna have to sit down and read this for comprehension. There's like, no humor here. None.

Will I learn anything?: At the very least, I learned a significant amount about the Japanese theme/amusement park industry and how it effectively parallels the development of the American outdoor amusement industry. And about some individual parks - Huis Ten Bosch for sure. It's a major focus of the book because that specific park had the most significant planning of any in history. Original plans had 20,000 residents living inside and around the park, though ultimately they fell way, way short of that due to completely misreading the real estate market and the viability of living at a theme park resort built on reclaimed land/former industrial space.

In greater detail, however, this book provides opinions - well defended opinions with an enormous amount of citations to back them both empirical and theoretical - about the privatization of public space. According to Mitrasinovic, to understand the expansion of private leisure space is to understand capitalism and to understand the underlying desire for both control and social conservative attitudes that are inherent to capitalism and liberalism. This is traced back to the 19th century and the Crystal Palace; a fine starting point for modern outdoor recreation influenced by the West. He claims that at the very root of this is the application of military theory - gathering of demographic information, topography, determinations about ease of transporting people in and out, supply chain management, and so on. Inherently militaristic, there are natural appeals to traditionalist family values, ruralism, agriarian life, and so on. Ultimately these are ploys to eliminate/prevent diversity through the guise of meritocracy, enforce class division, and inevitably merge back with the state & police structure as the "theme park model" becomes standardized for all public space while parks welcome surveillance apparatus onto their guests.

This is a very, very rough read of what he spends many thousands of words to say and is lacking in much nuance, so I would recommend that one actually take the time to read the book or at least some excerpts rather than merely take on my review of the book as the entirety of the argument. I am dubious of much of what is said here knowing full well the amusement and theme parks are not merely a western liberal construct, but as the author himself recognizes, follow traditions and models passed down through the centuries long before Adam Smith or Malthus. In addition, recreational spaces including amusement rides were prevalent in every reasonably developed socialist nation during the Cold War period: we know now increasingly how many public amusement parks existed in Russia, but there is clear and indisputable evidence of their existence in pre-Deng China, in Castro's Cuba, and certainly even Juche-era North Korea. To some degree this is acknowledged but it is also pointed out as to not be relevant as it is not the subject of the book. So be it. I am dubious of other things stated, particularly the relationship of military theory and liberalism; I find it hard to believe that amusement facilities and public space were built primarily upon developments made by generals still fighting in ordered rows exclusively in open fields rather than innovations primarily generated by mercantilism (European, Middle Eastern, Indian, or other).

However, having said that, there is certainly merit to many arguments and in some ways it seems prescient. Universal Beijing has announced that they will be using facial recognition for their park's entry: without a doubt this should be considered part of a large scale test of that same software for the purposes of the police and military in China and ultimately any nation desiring access to the software/hardware down the line. Theme parks as we know them are absolutely, unequivocally spaces that exclude persons, especially on the grounds of economic class. Much of the discussion about how theme parks increasingly seem to be exclusionary does so because of price increases to passes that make it more difficult than ever for local persons of middle class economic distinction to attend in lieu of a global audience traveling to see Disney and Universal. Alternately, discussion of Cedar Fair's new pricing options that helped drive massive increases in attendance over the Halloween season at parks like Cedar Point is frequently seen as not excluding enough persons.

Ultimately, reading this led me to request another book from the library which he contributed to and edited titled Concurrent Urbanities. Unlike Total Landscape..., this book is prescriptive and seeks to look at how design can be used to create spaces that are more conducive to community building and inclusion. These are things which Dr. Mitrasinovic sees as being the result of neoliberal policy and the commodification of the state, which are intrinsically negative and necessarily lead to establishing obstacles to upward mobility and an increase in policing. That having been said, the book won't be part of the Theme Park book series (after all, Prof. Mitrosinovic is not a fan of theme parks by and large!) as it simply doesn't deal with that topic.