In late November everyone's friend Universal Orlando Permit Bot (seriously follow them) discovered a new permit to combine four retail locations into one. No locations were given so speculation ran rampant.

Well we think we know what is closing now: Fresh Produce, the women's clothing store, is running a closing sale through the end of the year.


Wow, the Fresh Produce store on CityWalk is nearly empty with all merch marked down to $5– CityWalk stores are changing... pic.twitter.com/IqKx8lvDlv
— AmusementPics.com (@AmusementPics) December 21, 2019

This spot of CityWalk currently contains four non-Universal owned shops: aforementioned Fresh Produce, Piq novelty shop, Fossil watches and leather, and Quiet Flight, a clothing store where half the foot traffic is from UOAP holders cutting through going to Universal Studios. While we have not seen indication the other three stores are closing yet it is likely they will in 2020.

So, why close these four stores and consolidate them into one? Some are posturing it could be the second American Nintendo World Store or a preview center for Epic Universe. I don't think it's likely those, it's still too early to open a Nintendo World Store in Orlando and a location on the west coast first makes more sense. Plus a preview center for a park that's still not fully revealed, in a huge area to boot, makes no sense. Instead I speculate the Universal Studios Store is moving from its current location and into an expanded, more prominent location. 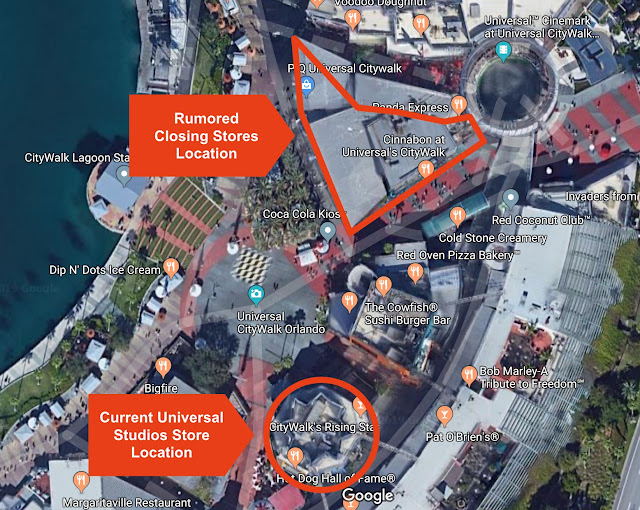 Currently the store is located off the main walking path and is quite small. By moving to a larger location space can be made for dedicated Potter, Nintendo, Dreamworks, Illumination, and Marvel sections. Of course this is speculation and until Universal confirms their plans it is best to treat it as a rumor.

As for what would going into the old Studio Store area could be the much desired Epic Universe preview center, a new store, the much rumored escape room, or something else entirely.

With the further reduction of 3rd party vendors at CityWalk eyes now turn to two notable stand outs: Bubba Gump's and Margaritaville. Both occupy prime real-estate, including the first thing guests see walking in from the parking garages. I would not be surprised if Bubba Gumps closes soon to be replaced with another, new Universal owned restaurant.

Update: Posters on Inside Universal have said that Island Trading Company and Fossil are currently discounting their merchandise. It remains to be seen if Piq or Quiet Flight are part of the closing too. Additionally Fresh Produce has closed.
Posted by Joe at 12:26 PM