Finally! Light reading and lots of pictures - the sorts of coffee table books this hobby is known for and ones for which I can tear through the contents in about a day or two. 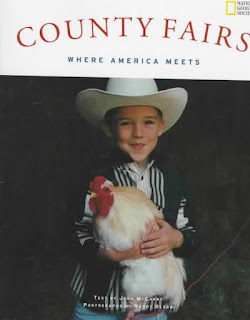 This book was produced by the National Geographic Society in 1997, and my copy was acquired through a name you'll come to see frequently here in this feature: John K. King Books, the largest used book seller in Michigan and among the largest in the world. The former glove factory contains a reputed million books, which is entirely believable given the size and sheer volume of items inside. I go roughly 3-4 times a year on average, and I almost always bring back a variety of rarities and common books. This trends more to the common end.


McCarry and Olsen were sent out from coast to coast, seeing fairs from Western Massachusetts to Oregon and LA, discussing with people the value of fairs in modern America. A short history of American agricultural fairs (and some insight into the European trade fair predecessor/inspiration) is provided, though you would be better off with Book of Fairs by Helen Augur (published in 1939; yes, I own a hard copy and will review it). Olsen does the photography while McCarry writes the words; I'm not at all surprised reading it that McCarry seems to be acting like an alien going to the fair being a Yale grad from a well-to-do Massachusetts family (he mentions this, of course), and as such the literature reads at times more like David Brooks trying to understand working class America by seeing who will engage him in discussion at a Pennsylvania freeway exit Denny's (e.g. not well).

To save you the trouble; McCarry finds that county fairs are important in bringing together communities; old people socialize, kids find validation in their crafts and farming while going through social rites of passage in the carnival. He finds disconnections between certain vendors and their desired audiences: the old man with his Civil War display in New England; an Army recruiter at a state fair staring at the rides; the carnies at an Iowa county fair where agriculture takes the lead. What this is supposed to mean in that narrative is uncertain - I suppose it is him perhaps making the argument that this shared experience is eroding. One young farmer interviewed for the book I discovered to be working for the USDA today, in many ways fulfilling what they suggested they wanted to do as a 15 year old.

DO I WANT THIS:

How Does It Read: Honestly speaking, it reads very easily. There's not a ton of text here in the 160 pages. But you're not getting this book for the text, well written prose as it often is.

Will I Learn Anything: It's possible you may come to this book knowing very little about fairs, how they're operated, what 4-H is, things like that. For me, the primary takeaway was understanding that at least at the time of the book's sale, animal auctions at fairgrounds were less "true" animal auctions and more or less a form of charity in the animal agriculture industry to encourage future generations of farmers by intentionally overpaying for young people's animals. I have no idea if or how subsequent economic slowdowns in 2001 and 2007 changed this, if at all. I would guess with the further consolidation of the agriculture industry that it has not changed.

Did You Take Anything Away From This?: You buy this for the pictures that it contains. I'm not telling any photographer anything they don't already know, but taking pictures of people is actually the strictest and toughest test of photography. It's really fucking tough. In that sense, this being a coffee table book and such, that's what you're really looking for content wise and Randy Olson delivers. Later in his career, he wins the POYI for both best Magazine and Newspaper photograph, making him one of two people to ever accomplish that feat. Carnies, Prison Choirs, Cheerleaders, Fire Breathers: Anyone who's ever picked up a camera and tried to do something good will spend their time shaking their head at some of the compositions he did.