This is not my first attempt at reading this - I did some time ago long before Distwitter as I was barrelling through literature during my tenure at MSU. However, now I've picked up on even more than I did then about the history of EPCOT Center, the subsequent theme park, and of course Walt's vision having done my own extensive research through the years, aging, and so on. You have not come here to read a review of me, though. You came for a review of the book. 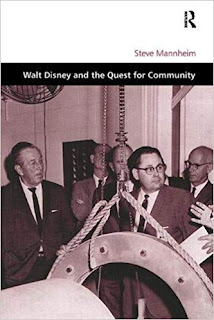 It's a short book - only about 120 pages with a huge section of footnotes and a biographical essay at the end. It's classic academic text from a historian: little in the way of opinion, citations for everything that isn't, little to no speculation that's unwarranted. That immediately puts a damper on where the book could have gone, but leaves it lean, mean, and packed with facts. By the time you're done digesting it, you should feel fairly comfortable understanding where Walt's beliefs were on why he was doing EPCOT, what inspired him to make the decisions he did about it's early design, and how incredibly far he was from actually achieving any of the intended goals related to the project. In fact, if there is any conclusion that you can take from this book, it is that Walt and no one but Walt really had any individual vision for EPCOT. He gave people ideas and took feedback. He certainly had people draw sketches of the layouts and planning and greenspace. He approved models. He allowed for input, but the entirety of the project was truly Walt's.


The book is split up into conception, design, and ultimately how it might have operated. Everything from the New Town Movement to the 64-65 World's Fair to teenage crime rates in the 1960s is touched upon. The book's title, "Quest For Community," does a good job in my estimation of outlining the fundamental premise of not only why Walt decided to pursue construction of EPCOT, but why the idea ultimately died with him. Walt sensed a seismic shift in the body politic in America dating back as far as perhaps his testimony to the House Un-American Activities Committee in 1947. By 1964, civil rights protests in New York brought them to the gates of his attractions. Walt saw post war middle class progress' negatives with urban cores depopulating and traffic increasing in Southern California. His love of trains had been negatively affected by the push for automobiles and freeways, which also led to pollution of all sorts. Crime rates began to increase, and the once indomitable nature of Disney's optimistic futurist beliefs were challenged.

Taking cues from the best urban planners in the world and being somewhat uniquely gifted with his immense wealth to travel the globe, Walt Disney took back lessons learned from Europe to America in his hope that he could re-establish the sort of community he cherished growing up in Missouri's small towns. He planned to do this while also having significant density and public transit options, mimicking Stockholm, Sweden's development ideas while adopting radial plans once drawn up from a proposed and unbuilt 1964 World's Expo/DC commuter city plan. The combination of ideas was in some ways most akin to the "airplane city" of Brasilia, constructed at roughly the same time frame in the Amazon to be it's nation's new capital.

Like many books in the academic sphere, it is expensive to buy out of pocket and of limited printing. The ebook on Google is listed at $50. $50 for a PDF. You'll want to go to a library - preferably one attached to a major university where related programs might exist - to get a copy. Maybe giant library systems in major metros too. It's gonna be a short list of how to acquire access.

DO I WANT THIS:

How does it read?: It's isn't engaging or that full of stories. the largest chapter is the first one, and some chapters are just a couple pages in length.

Will I learn anything?: There are two ways to not learn something from this book. 1) Don't read it. 2) Read it, but ignore all the parts that aren't about how cool it was.

Did you take anything away from this?: Unlike mechanical rides or even entire theme parks, Walt's vision in this case was so far from complete that his death spelled near immediate doom for the project. Time and time again, imagineers indicate that they had almost religious belief in Walt's vision. Imagineers cite that his vision had rarely failed before and through sheer force of will Walt Disney had managed to make the nearly impossible come to life. EPCOT, as he pictured it, was "a city in a state of becoming." Never the future, never the past, always being something new and different. But it was also a city, one Walt planned to have inhabited by 20,000 people with their own ideas, hopes and dreams. The creative types around Walt marveled at the ultimate success of individual attractions like Great Moments with Mr. Lincoln or the entirety of Disneyland's success, but throughout "Quest for Community," examples of Walt's naivety or conflicting values abound. Walt Disney didn't know or care how companies protected intellectual property on devices or technologies, planned to use eviction to prevent slums from ever forming while promoting individual liberty and family units, and wished to install multiple levels of underground tunnels in space which would later see enormous sums of concrete poured to prevent sinkhole formation.

Another takeaway that I think is important about "Quest for Community" is that while Walt Disney was absolutely a brilliant thinker and responsible for lots of innovation, he was not acting alone nor was he without external influence. Whether it is EPCOT's radial pattern or the PeopleMover (turns out La Ronde's monorail is the real McCoy, and the PeopleMover an imitation!), evidence is produced from archives and interviews clearly showing that he had appropriated many an idea and sought to improve it or introduce it to new audiences as his own. This is not inherently wrong: I do it. You do it. None of us exist in a vacuum. However, it is fascinating to see how these ideas have slowly been turned into his and the influences the copycats. This is not expressly stated by the text, but can be inferred by the references on the development of literally every aspect of EPCOT and his other developments (from the Burbank Disney studio to the development of CalArts).

For me, the book has historically been very important in framing how I viewed the idealistic EPCOT intended by Walt and how the company differs from what he intended following his death. Re-reading it changes little: Walt believed he was uniquely able to solve the problems of the world while being informed primarily through noninclusive consumption patterns that in no way resembled the America of the future. Walt Disney also still had firm and unshakable trust in corporatist leadership to push the nation forwards rather than recognizing that the demands of increasingly untethered capitalism were fundamentally incompatible with his own vision of urban renewal and the rebirth of traditional family units. EPCOT Center, the theme park, was a tacit admission that EPCOT the City was unworkable as envisioned, and merged many concepts from the city into the theme park as attractions (most notably World Showcase) because of the need to generate revenue from the site. The Walt Disney Corporation today as an aggregation of media content and distribution networks has very different designs than the one Walt was in charge of, but this is not bad practically speaking as it allows for more diversity and global fellowship.

What I have shifted on slightly is my own perception of Walt Disney in other regards. I've often tended to be harsh in viewing him as simply repackaging existing ideas with a unique promotional structure; that his innovation was mostly in his ability to market, move merchandise, and "brand" in a way far more impressive than the traditional owner/operators of outdoor amusement facilities. Walt was not the first person to "theme" an attraction, but what he did do is theme it using the experience of a film maker to generate a more favorable reaction from the audience. Favorability and realism are exceedingly different things, and Walt was not someone seeking realism or immersion. Rather, he sought idealism. Not role play, but simply to experience as though one were watching a film. Also, Walt was very much a thinker about practicality. "Utilidors" are not named "Themeing tunnels" - they have a utility purpose and as such his parks are able to keep restaurants full of food and merchandise regardless of the crowd levels. Yes, he liked the idea that a cowboy would not wander through New Orleans. His real concern was having infrastructure for his vacuum tube-based trash collection and compacting system installed along with water/gas/electricity/wiring for controls/carts not in use/etc. When the Pecos Bill fixins' bar is as much a part of the show as Space Mountain, it has to be able to be maintained accordingly.

1. Physical Planning
2. Transportation: The End of "Autopia"
3. Architecture and Construction