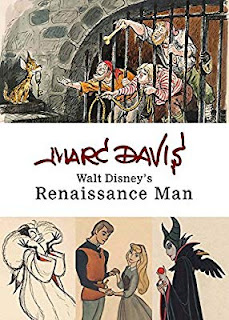 Published in 2014 by Disney Enterprises, Inc., I decided to take a flyer on this book given the rave reviews a 2019 release dedicated to Marc Davis has gotten in Disney fan circles. This is expressly an art book, and any text that it contains isn't terribly in-depth, though it helps to flesh out aspects of Marc Davis' personal life, his background prior to animation, and his contributions to Imagineering. Marty Sklar makes the point that Marc Davis' touch for gags and humor was a cornerstone of the Disney Parks successes. He is attributed as to having gone into the parks and reporting that the place needed more humor, leading to his transition from animator to imagineer. The most prolific designer of his era, Davis saw attractions as things to experience rather than interactive narratives driven by the designers and as you may or may not be aware, that is a major sticking point in all arguments about theme parks before and after.

DO I WANT THS?

How Does It Read?: As this is an art book, words take a back seat unless they specifically describe aspects of the highlighted art. Theme park fans will be most interested in the 7th chapter with oodles of concept drawings for attractions like World of Motion, Carousel of Progress, and Pirates of the Caribbean.

Will I Learn Anything?: Depends on the audience. For those who are hardcore Disney fans, I imagine some of the knowledge about his art is probably known. I'm not an animation history type of person or a Disneyana type, so I largely flew through those sections of the book as impressive as all the drawings were. It's less likely that you'll know as much about his time as a draftsman or his adoration of Papua New Guinea, and there is quite a bit there to unpack. I certainly know something about his relationship with his wife Alice now, but this isn't really the reason I read books related to the theme park industry either.

Did You Take Anything Away From This?: I mean, sure, Marc Davis is a very good artist and it was interesting that he would dabble in modern art work aside from his time working on animation and creating so many of the characters we know from the Disney theme parks. It's interesting to see all the sketches and such, but for me, I'm just not the target audience.

Afterword by Randy Haberkamp
Posted by Alan Conceicao at 2:11 PM