Two new notice of commencents were released to the Orange County Comptroller site today, both of which are for major Universal Orlando projects.

The first is for steel installation by Coastal Steel for Project 722, which we all know is the Wizarding World of Harry Potter expansion in Universal Studios Florida. 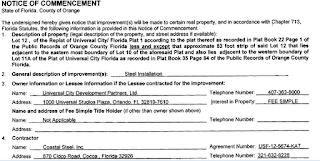 The second is for interior finishes by Adirondack. This is for the Transformers ride, as we reported earlier in the attraction's development. Adirondack has also worked extensively in the themed entertainment business.

As always, stay tuned to @Parkscope for more information.
Posted by Sean at 3:44 PM