Exciting times, true believers! Universal has filed a notice of commencement today which I believe is for the Gringotts ride track. It can be seen below. 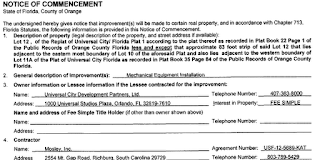 As you can see, it's for the installation of mechanical equipment by Mosley. Doing some digging, I found Mosley's site, which shows that they are a coaster fabricator and installer. They've worked with all the biggest manufacturers, and were the ones that built/installed Rip, Ride, Rockit.

So there we have it. We should have track going up inside the building sooner rather than later.

Universal also filed 2 other NoC's, one for the replacing of a kiosk in KidZone, and another that doesn't have an attachment yet. We'll keep you updated on that one at @Parkscope.