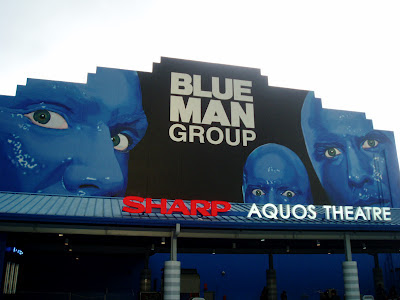 The up-charge attraction, for better or worse, seems inherently shady. Carnies conning customers in games of 'skill', freak shows on the boardwalk, and fortune tellers are part of the American amusement park culture. With the opening of Disneyland and the suburbanization of the American family, these up-charges died off. Now such opportunities come in the form of gag photos, temporary tattoos, hair braids, and unique package experiences. Even today, a theme park goer can see Vegas or Broadway quality shows or unique dining experiences. Disney has had a lock on this for several years, thanks to it's successful Downtown Disney projects such as La Nouba.

Universal in 2005 filled in the deserted Nickelodeon Studios, and gaps in their CityWalk offerings, with Blue Man Group. An off Broadway hit since the early 90s, they made names of themselves through Tonight Show with Jay Leno appearances, Intel TV spots, and many successful shows around the world.

The Orlando show, as it opened in 2007, was based on a show design from the short lived Toronto version. Prior to Toronto in 2007, Blue Man had their small theater shows (NYC, Boston, and Chicago) and large theater shows (Vegas, Potsdamer Platz). The show features the size and scope of their lager shows (Vegas), while paring it down to have a smaller supporting band and to fit in smaller theaters.

As part of the “Year to be Here”, the Blue Man show was upgraded to feature the material from the new Touring Show. Universal and Blue Man shared the costs of upgrading the theater, to the reported tune of $2 million. The improvements include widening the stage, removal of the set, installation of high tech LED curtains and displays, upgraded lighting systems, and installation of the Zygote Balls.

My past vacation to Universal Florida I got a chance to see the new Blue Man Group show; row F, seat 20. Unlike previous visits, I saw this show alone after my family and friends left to go back home. This allowed my ideas to ferment into what I hope is a six-pack of Parkscope articles.

Blue Man show’s themes center around the expanding role of technology, information overload, absence of physical human communication, gender roles, the human vision system, modern art, and vaudeville comedy. To the Blue Man, there is no fourth wall; you are experiencing part of the world of Blue Man. The stage and seating area are both playgrounds for the Blue Man.

And despite what people say, or what you might think, the Blue Man are not aliens. They are genderless (there have been women Blue Man), raceless, egoless figures who experience the world with new eyes. Captain Crunch cereal is used to make music (what else would you use a cereal advertised for it’s crunch for, anyway?) Art is made with gumballs and marshmallows. And Yves Klein is celebrated.

The whole experience ends in the Exaled Moment. From the original Blue Man Show in New York till very recently, this featured endless rolls of cray paper streaming across the audience as KLF’s ‘Last Train to Transcentral’ plays. The new ending now incorporates a dance party, Blue Man humor, and audience participation into a colorful celebration of your booty.

I have been a Blue Man fan for many years, so it should be no surprise that I recommend this show to everyone. It's not typical production, as equal parts music, improv, and science fair are combined to form a typical show. But if you are open minded and want a fun night at Universal, Blue Man is a great night cap or kick start to a night of partying.

The Blue Man experience is an ideal, condensed theme park experience. We enter the theatre segmented and isolated, yet we leave as a group. Comedy, drama, music, education, and technology all cumulate into a euphoric, exalted moment. What was once was alien turns out to be identifiably human and pure. For 90 minutes, we are a child again exploring the world with the Blue Man.
Posted by Joe at 9:23 PM