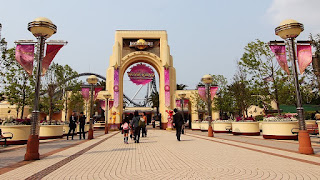 "Welcome to Universal Studios Japan. Hollywood and the Far East. In the Backlots the stars shine 24 hours a day. No wonder tourists flock here in their millions. We're about to take you behind the scenes of one of the busiest theme parks in the world. To a city within a city. You'll see how Hollywood's heavyweights join forces for one of the most ambitious and expensive productions ever (Terminator 2: 3-D and the Jurassic Park River Adventure). Learn the tricks of the trade behind the Wild Wild West Stunt Show., plus the dynamite-charged Waterworld show. We'll let you in on the secrets of the ET Adventure and Jurassic Park!" 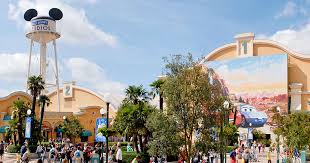 "Lights, Motors, Action, a stunt show where you become part of the movie action. Catastrophe Canyon, an earthquake which causes chaos right before your eyes. And Rock n' Rollercoaster, a roller coaster ride where you're blasted into an Aerosmith rock music video. It's all in a theme park right in the heart of Europe: Walt Disney Studios Paris!"

Posted by FiddlersGreen at 9:16 PM