It's late, true believers, but here we are. Tonight, the UOR Buzz Twitter account tweeted that Universal City Property Management III LLC was planning to build a new theme park, a 663 room hotel, and a new, large retail area on land in Orlando. The company was once under the main Universal brand and managed the old plot of land that was once owned by Lockheed. When Universal sold this land in the early 2000s, the company also changed hands. Below we can see the land. 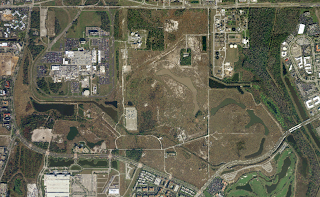 As you can see, it's a significant plot, and has been proposed for quite a few uses. We're attempting to figure more things out as the story develops as well as discovering what the intent and who is behind this new development.

Stay tuned to @Parkscope for more as it develops.
Posted by Sean at 11:46 PM