After a middling 2006 season, Joyland in Wichita closed for the final time. Outside of the purist segment of the theme/amusement park fandom, there was little note of its demise. It did have a wood coaster with the last set of fixed lap bar PTC trains in operation and a Bill Tracy "Whacky Shack" dark ride, but it was so far away from everything else that few except the most exceedingly hardcore had ever made it there during the 60ish years it was in business. Almost as significant was that this marked the first time since Joyland opened that the state of Kansas was without an amusement or theme park. This was rectified for a period of merely two months when Wild West World opened in the Wichita suburb of Valley Center during the summer of 2007. It closed because it was the product of gross malfeasance by a con man who later found himself heading to prison for skimming money off the project.

Kansas then seems like a poor place to discuss amusement rides. The two largest amusement parks noted on RCDB are a place called Kiddieland in Pittsburg, and whatever the hell All Star Adventures is in Wichita. There is a really big water park here: Schlitterbahn set up shop on the side of the Missouri border with less regulation, a fact that came in handy when they built the worlds biggest water slide and it proceeded to decapitate a state representative's kid in front of half the government. How long can this entry be? What is there to talk about in Kochistan?

I'm here to tell you that there's much, much more than meets the eye. In fact, you're about to learn about a phenomenon which, to my knowledge, has never been written about before or observed by anyone in theme park fandom or the industry.

If you have ever heard of brands like Ocean Spray, Sunkist, or Land O'Lakes, then you have heard (knowingly or not) of agricultural cooperatives. Cooperatives are locally and nationally the way family farmers have been able to afford supplies and sell goods for generation after generation not only in the US, but worldwide. Dating back to the 19th century, co-ops are effectively the rural version of socialism, often working on a much smaller scale, but with similar aims. It is worth suggesting that co-ops allow small rural communities a sense of not only self-sustainability in an ever changing world, but collective self-reliance.

Kansas is an exceedingly rural place with little urban density and lots of agricultural lands mixed in with good ol' fashioned mineral extraction (oil/natural gas). In this environment, these small, often socially homogeneous tribes split up into counties have built strong, self-sufficent systems. The desire to retain these systems unchecked and unchanged undoubtedly reflects in Kansas' strong red streak for presidential election. It should be noted that it entered the union as a free state, unlike Missouri, its neighbor and often initiator of awful violence prior to and into the civil war, so this is not to say that it is uniquely racist in ways that, say, post-Confederate states are. It simply wasn't an appealing place for people to move in the days of industrial revolution, and the communities have generally retained their makeup (recent influxes of Hispanics notwithstanding).

Kiddieland in Pittsburg, KS? City park filled with kiddie rides of 60s (or older) vintage. There's the state fairgrounds, which is home to Ye Old Mill, another 100+ year old dark ride similar in many ways to Iowa's noted in a previous edition. It was learning about Ye Old Mill at the Kansas State Fair that actually inspired me to start searching about the potential of permanent amusement rides at fairgrounds. No one had really done it before I had. Anything that had been found was the result of individuals stumbling across coasters and sending the data to RCDB for entry. All of that back story leads to this somewhat surprising fact: Kansas operates more community amusements than any other state in the union. And it does that by a significant margin.

16 municipalities and counties in Kansas are home to independently operated carnivals all their own for fair season. To this point, there's really only 4 which have been made known to the amusement park fandom via my submissions of their existence to RCDB a few years back: 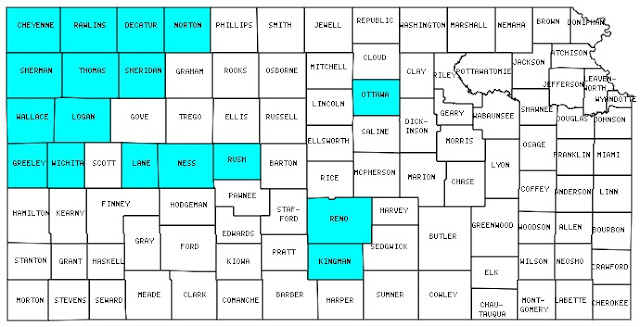 -Greeley County Fair (Tribune): Looks to be 9-10 rides including what may be a swinging cage attraction, a Allan Herschell kiddie coaster, and Eli Wheel

-Kingman County and 4-H Fair (Kingman): Only 5-6 rides including a kiddie coaster, Tilt A Whirl, and Eyerly Octopus

-Wallace County Fair (Sharon Springs): 7-10 rides, including a kiddie coaster, Round Up, Tilt, and Ferris Wheel

...the rest never made it to RCDB because they didn't have roller coasters. Unfortunately, I never had a really good place to share that list until now.

-Lane County Fair (Dighton): 7-8 rides. The outlier here is a Gravitron to go with the usual array of Paratroopers and kiddie rides. Slide is also present.

-Norton County Fair (Norton): Not much is known about the Norton County Fair, and the only documentation of it comes from a Google car that drove past its setup in 2008. So to get the straight scoop, I got in touch with Craig Eveleigh, the man in charge of the Norton Sports Center and the carnival rides. There are 5 larger rides, including a small roller coaster, and 5 kiddie rides, all intended to entertain the roughly 4-5,000 attendees and their kids during the 5 day celebration.

-Ottawa County Fair(Minneapolis): A very limited midway anchored by a Scrambler and a Tilt-A-Whirl.

-Rawlins County Fair (Atwood): Melinda Bassett, the treasurer for the volunteer organization running the fair, informed me that presently the carnival is inflatable based with the desire to buy rides assuming a deal can be struck to lease the county fairgronds.

-Rush County Fair (La Crosse): At least 9 rides, including a Hustler, scrambler, and Tilt. There's a great piece about the back story for the carnival here from the Hays Daily News. There's some fantastic detail in there about the costs of operation and the difficulties many of these small carnivals run into.

-Thomas County Fair (Colby): Anywhere between 6-10 rides, most of the common favorites you've seen on this list before for family and kiddie rides alike.

-Wichita County Old Settler's Picnic and Fair (Leoti): 7-10 rides with a mix of old favorites and a couple slightly different pieces (the Go-Gator actually belongs on RCDB). The standouts? A train that runs on real track around the perimeter of the midway and an operating Flying Scooters ride. The folks at Flyeraddicts.com managed to run across this awhile ago, but it hasn't made it to the wiki page for the ride.

In inquiring about these carnivals and researching the article, I learned a bit about communities and logistics of running these operations. It really is a community effort from start to finish; prices are intrinsically low, space for rides is generally provided virtually free, and labor comes from community figures who take time out to do something for each other. Insurance is a major issue: one fair planned to operate a Roll-O-Plane until being told it would cost $5,000 for liability insurance for the weekend. From that point forward, they opted for rides that were lower to the ground. 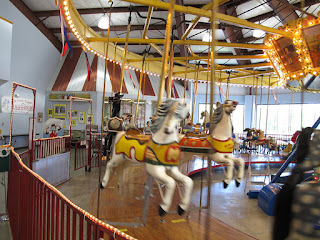 Kansas actually has a fair amount of relevance to the overall history of the American amusement park and carnival. Leavenworth, not far from Kansas City, is home to the C.W. Parker Carousel Museum. C.W. Parker was an early ride manufacturer in the United States, and his factory was located only a couple of blocks from the present day location of the museum in Leavenworth. Parker began constructing rides back in 1892, and the company that carried his name operated under he and later his son all the way into 1955 constructing carousels, ferris wheels, and circular rides. Parker's carousel animals typically lacked some of the fine realistic details of the Looffs or Dentzels that were his contemporaries, but he made up with this in volume of sales and manufacturing. The museum features a pair of operational carousels, with the 1913 C.W. Parker being available for public rides. There's also a number of display pieces, including an antique mid 19th century primitive hand cranked carousel which, while still capable of motion, is too fragile to allow anyone to ride. This may be the oldest such ride in North America.

Six separate carnival companies called Kinsley, Kansas home during the 20th century. Today, that town commemorates that showman history is the Carnival Heritage Center. A kiddie carousel and many artifacts are present, including an unassembled double decker carousel. The museum is open by appointment only.

Yet another CW Parker carousel, as well as other attractions, is available at the Dickinson County Heritage Center in Abilene. Abilene was the original home of the CW Parker manufacturing until the 1910s when it was moved to Leavenworth. The museum features historic buildings and all sorts of interpretive exhibits detailing the town's history in the disparate worlds of beef production, carousel assembly, and telecommunications.

FORPAZ is the group that takes care of and develops Independence, Kansas' recreational opportunities. For a rural town of less than 10,000, they have quite the history of those. Riverside Park and the Ralph Mitchell Zoo has the history of providing the town's sole astronaut to NASA - Miss Able, a squirrel money. A carousel and train operate for visitors there, in addition to a really gorgeous and huge fountain and a mini golf course.

Pools and aquatics facilities were extremely popular additions during the days of the New Deal, and these have often been expanded on throughout the state. Places like the Gardner Aquatic Center, Saline's Kenwood Cove Aquatic Park, Garden City's The Big Pool, Dodge City's Long Branch Lagoon, and Wetlands in Great Bend have all expanded on being traditional pools into being full water parks.

DINOSAURS? ANIMALS? WE GOT DEM ANIMATRONICS 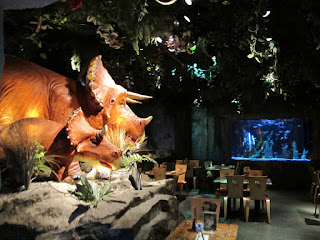 Kansas City, Kansas is home to the Legends Outlets, a massive Kansas-themed shopping complex with a Yellow Brick Road, statues, and facades detailing the history of the state. There's also a T-Rex Cafe here from the good folks at Landry's. This is the second location, with the other being the Disney Springs one in Orlando.

Salina, Kansas is where you can find The Museum at Rolling Hills Wildlife Adventure and all 64,000 square feet of its glory. There are animatronic displays of animal/human interaction and a 360 degree 3D movie to check out in addition to the real animals that are part of the Rolling Hills Zoo (included with admission).

In Liberal, one may visit Land of Oz/Dorothy's House, a small museum and themed attraction dedicated to, what else? - the motion picture "Wizard of Oz." Don't expect anything too grandiose in this, but it is here and it certainly does exist, so why not include it?

As a good Christian led sort of state devoid of lots of people, predictably there are few haunted attractions. Field of Screams in Wichita appears to to be the state's biggest/best, with a 30 minute haunted house and a haunted escape room attraction on site.

Posted by Alan Conceicao at 2:00 PM

Email ThisBlogThis!Share to TwitterShare to FacebookShare to Pinterest
Labels: Hidden Rides and Themed Attractions of..., Kansas