With borders defined by the Sioux and Mississippi Rivers, Iowa is a classically diverse mix of the urban (Des Moines), suburban, (Ames, Iowa City), and rural (so so much of it). Much of the state consists of prairies converted to agricultural use, which comes with the after effect of needing lots of fairs to display the agricultural goods at. There's also several lakes around which recreational opportunities have been developed. But Iowa is squarely in flyover land, and as such barely gets any time on the internet. What's known about it outside Iowa? Uhhhh.....not really anything specific? 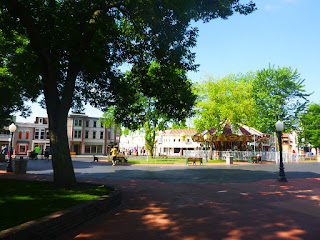 There's one thing that approximates a big park here in Iowa, and that's Adventureland in the Des Moines suburb of Altoona. Constructed at the tail end of the 1970s, Adventureland openly admits that it copies Disneyland in a multitude of ways. The entry of the park is clearly an imitation of Disney's first park, and many aspects like the Skyway also share inspiration from Walt. Past Main Street, the park becomes more or less typical regional amusement park fare, but with a few twists. Custom Coasters International, famed for their wooden coasters, built two rides here that are totally atypical. Outlaw, the anchor at the back of the park, is the only CCI wood coaster designed by Mike Boodley before he left to start his own (still existing) firm, Great Coasters International (GCI). Towards the center of the park is a dark ride/coaster hybrid called The Underground, featuring a rough mining theme and that is actually really cool! 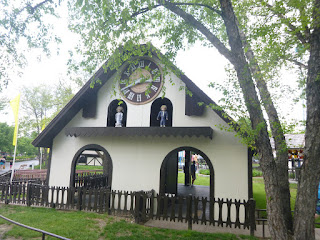 Steel coasters are equally off kilter. There's an OD Hopkins looper (Dragon) that has pulled primarily inverting duty since the 90s, and was joined in 2016 by the first Gerstlauer Infinity Coaster (Monster) in North America. There's an indoor Huss Breakdance style ride at the park. There's the skyride from the Spokane World's Fair of 1974. There's the only miniature version of the Mondial Windseeker rides; it stands only 200ft tall, has fewer seats, and works just about as well as the big ones (e.g. not at all). But  Adventureland's most notable features aren't the rides. Being far enough outside the city to have staffing concerns, the owners constructed an RV park and effectively trade space there for employment with senior citizens. On my only visit in 2014, I was served my tenderloin sandwich by an individual who had gone to Michigan State University (my employer) so long ago, he was the among the first to move into McDonnel Hall. McDonnel Hall opened in 1963. This unorthodox approach has been a huge winner, giving them motivated, friendly, capable staff for eons. In turn, the staff get somewhere to hang out in the summer and something to do. There have been presentations at IAAPA about their idea, but as of yet, they're still the only one taking this unorthodox approach even though it clearly works.

The second most significant amusement related event in the state (and Des Moines) is the Iowa State Fair. Held in August each year, Iowa State Fair ranked #16 on the MCW Top 50 in 2016, pulling over 1 million people in the two weeks it ran. 2017 marks a significant change for the fairgrounds as they transition to an independent midway. With their time frame overlapping with another regional indie midway (Wisconsin), there will be many questions as to what rides wind up coming to Iowa and what go there. What is certain to be there will be the two permanent attractions: a skyride and the venerable Old Mill, one of three century-plus old boat dark rides still operating at fairgrounds in the United States.

Away from Des Moines are a couple of other pieces of great amusement park history. Up north in Lake Okoboji is Arnold's Park, a historic amusement park operated presently by a non-profit community organization. There are a pair of classic indoor attractions (Tipsy House and Bug House) as well as a great old wooden roller coaster recently refurbished by the folks at Great Coasters International. Less known, but very much nearby, is the Boji Bay Fun House and Pavilion. Inside this unusual event center geared for conferences and weddings is a trio of classic fun house attractions; a rotating barrel of fun, a large wooden slide, and an incredibly rare human roulette wheel. The slide is actually open to the public Tuesdays through Fridays, but the rest requires a facility rental.

From here, things get much more obscure very quickly. Mount Pleasant is a town situated a couple of hours south of the Quad Cities. Odds are exceptionally good that you've never heard of it unless you happen to be the kind of person interested in antique farm equipment. Midwest Old Threshers is part county fair, part celebration of antique equipment, part amusement park. There are on-site museums about local industry and vaudeville, a narrow gauge railroad, full-size trolley line, and a carousel. Some of these items run outside just the event itself (there are Halloween and Christmas events!), but doesn't that take some of the fun out of it? If that wasn't enough hot steam train action, way over on the western edge of the state near the Nebraska border is Watson Steam Trains. Rides there on their small Ottaway miniature steam trains are a whopping $2. Nothing like some Good ol' Midwestern pricing.

Like other states in the region already detailed in the series, Iowa features a number of farms that have entered the world of agritourism. Most of these have similar offerings: Corn mazes,hay rides, children's play areas, slides made from large plastic tubing typically constructed for irrigation, and "jumping pillows" - open air trampoline like inflated surfaces for jumping. These include:

The undisputed heavyweight champ of the farms offering family fun is Bloomsburg Farm (http://www.bloomsburyfarm.com/) in Atkins. There's a wild west section to their play area, a zipline, a Pumpkin Cannon show (a huge pneumatic cannon used to fire pumpkins), and the Scream Acres halloween haunts throughout the Fall.

-The town of Story City purchased a 1913 Herschell-Spillman carousel, restored it, and operate it during the summer months.

-Blank Park Zoo owns a more modern carousel and is probably the most holistically themed non-historic attraction in the state. 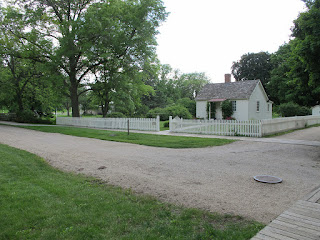 -There are several historic open air museums in Iowa to tickle one's fancy. The National Park Service operates Herbert Hoover National Historic Site and Library, which features a small village to walk around and better grasp the period in the 1800s when Hoover was young. The Pella Vermeer Mill & Historical Village is fairly impressive in scale detailing the migration of Dutch people's to Iowa in the mid-1800s. There's also the Amana Colonies National Historic Landmark...yes, if you've heard of either as being the names for companies making appliances and windows, you kinda know what the industries located in each is.

While we don't typically talk about roller skating here, Iowa does have something that is worth noting. The Skate Palace of Ida Grove looks like a gigantic castle and the inside (based on youtube videos) is the kind of 1950s throwback that is a museum piece just by continuing to exist.
Posted by Alan Conceicao at 9:59 PM

Email ThisBlogThis!Share to TwitterShare to FacebookShare to Pinterest
Labels: Hidden Rides and Themed Attractions of..., Iowa