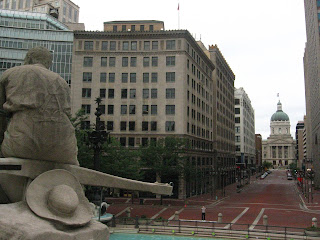 Describing Indiana to someone who's existence is entirely that of Coastal Acceptable America can be a challenge. Often the discussions focus on the negatives: the capital is nicknamed "Naptown" because it is seen as being "sleepy" except for one, slowly degrading event a year. Terre Haute smells like farts. IU and Purdue Football. The roads, especially the Turnpike, suck. Endless farmland. Gary, Indiana. AIDS breakouts. The Meth Capital of America. The Klan and all the ugly after effects of racism in the state that continue to this day. Dragging Indiana is easy to do: People from every surrounding state have been doing it for years.

But there's a lot that isn't bad. Indiana Basketball. The National Park operated beaches of Indiana Dunes. The classic resorts of French Lick, now freshly renovated and sparkling like they haven't in decades. Indy is a city with a real distinct urban core, a lack of intermittent surface parking lots, and a really nice river that runs through the place. Facilities second to none for athletics that have made this a go-to for amateur competitions. The state parks here are some of the best in the nation, and there's some solid zoos too.Tons of awesome turn of the 20th century architecture everywhere you go. 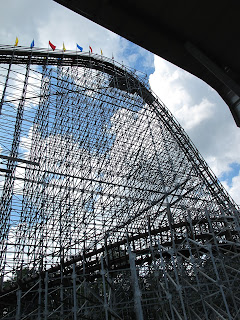 For theme park fans, there are generally two parks which everyone has already heard of: Holiday World and Indiana Beach. Both have undergone all sorts of dysfunction with ownership in recent years. For Holiday World, the death of scion Will Koch led to a legal battle that left the park with his wife and kids rather than his mother and siblings, whom have since moved south to take over Alabama Adventure. Indiana Beach's ownership passed to the kids of their elderly father, who promptly sold the park to the first slick sounding bidder that entered the scene; Morgan RV. Run by Robert Moser, the park was nearly run into ruin in one of the most vicious burns in recent memory before being sold off to a new firm, Apex Parks in late 2015.

The 90s and 2000s were hard on Indiana's amusement parks, and 5 facilities ended up closing down forever over that stretch. Old Indiana Fun Park was among the most substantive to fail, collapsing in 1997 after the negligent death of a guest killed by a derailing park train the year prior. The facility was bought by Six Flags and became famed as a national boneyard for removed coasters from parks like Riverside (now Six Flags New England) and Opryland. All of those attractions were scrapped in 2006. Columbian Park in Lafayette was a municipal park with dry rides (including a dark ride) that met its demise in the mid 90s. Enchanted Forest in Porter and Sauzer's Kiddieland in Schererville, IN weren't big, but did offer reasonably priced recreation before both fell to bankruptcy. Enchanted Forest, at least, is now a site where a water park operates. And finally, there's Fun Spot in Angola. It bit the dust after the 2008 season when the recession killed many local businesses who did group outings, and most of its rides have since been dispersed. 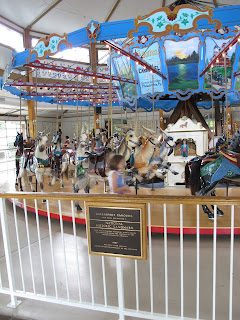 History, however, still lives in many other parts of the state. The Cass County Carousel in Logansport is an excellent diversion and features a rare ring machine for outside riders to enjoy. A 1906 Denzel Carousel can also be found in the town of Shipshewana. In many ways, Shipshewana is a classic "themed attraction" across the board. It isn't really known outside the midwest, but within that space, it is a very notable resort town featuring large hotels and shopping/entertainment which is primarily centered around the substantial Amish/Mennonite population here. The Menno-Hof Museum is a good starting point for this and features all sorts of multimedia exhibits and theme rooms to draw people into a better understanding of how these groups came to be and populate the Americas.

For those seeking other forms of escapism to ages past, there are a few options throughout the state. Laporte County Fairgrounds is home to Pioneerland, which features people in historic clothing showing off how life was in the first half of the 19th century. This is generally only open during the fair, but you might be able to glom onto a school group in May or September. In Rockport, Indiana, the fairgrounds there abuts the Lincoln Pioneer Village and Museum, showing some of the early hangouts for America's most beloved president. This is open daily, though apparently turns up during the Freedom Festival each July. The Enchanted Lakes Renaissance Faire in Angola almost made this list, but wound up disbanding after 2016.

Another part of Indiana's history that has struggled along and continues to exist is the Peru Amateur Circus. At one time decades ago, the small town of Peru was to the circus industry what Gibsonton was to carnivals, playing host to winter quarters of the likes of Hagenbeck-Wallace, Ringling Bros, and Buffalo Bill's Wild West Show. A museum is the only remaining year-round vestige of this history, but the circus itself runs in an arena specially operational solely for it for one week each July.

Zoos, as have been shown in this series, often feature amusement attractions. Indiana's are particularly notable. Indianapolis Zoo has a small Zierer roller coaster - that in and of itself is notable. But even more impressive is the Skyline attraction. Operating on the same premise that a skyride might, it instead has individual cabins running under tubular steel track with a third rail powering. This is the first such ride built by Chance Manufacturing. Not to be outdone, Fort Wayne Children's Zoo has what appear to be both Hopkins built attractions with their own traditional cable skyride and a flume ride through the Australian section of the zoo.

Like Illinois, there's some pumpkin farming going on in Indiana. With it come farms looking to provide entertainment to kids, and Harvest Tyme Pumpkin Patch brings a bunch of kiddie rides to entertain the youngsters. Looking for something more complex? Then venture over to Fair Oaks Farms halfway between Gary and Lafayette. There's some really big tours of their dairy and pig facilities, 4D movies, kids rides, and more.

Indiana Live Steamers in Johnson County, IN operates public rides every third Saturday in May, June, July, and October, along with longer hours during the Heartnut Festival in September.

There's a number of haunt attractions during the month of October: among the largest is the Indy Scream Park (haunts + midway, games, et al.). A larger list can be seen on this site.