The first state constituted as a commonwealth in the list, Kentucky appears as a somewhat unknown quantity to much of the country. While Lexington and Louisville may have some name recognition, by and large the state is a mystery to the coastal elites and even many of the urban dwellers in the upper midwest. The mighty Mississippi and Ohio Rivers form some of the key boundaries, while mountains, forests, and swamps complicate the development of the state beyond its history as a center of mineral extraction and tobacco farming. Pro-corporate laws made it an attractive location for car manufacturing in the 1980s and 1990s, but that comes with the price of low wages. Kentucky's per capita income is 43rd in the nation while unemployment sits at an official rate of 5%: jobs, yes, good pay, not so much. Don't expect corporations to rush changing that either.

When pay is low, you then can't expect recreational opportunities to come rushing in. Kentucky also has a serious debt problem precluding them from spending much more on creating new ones at the state operated level; what you got is, one might suggest, what you got. No classic parks from the trolley days survived the Civil Rights Movement: desegregation was not easy for recreation, and Louisville's Fontaine Ferry and Lexington's Joyland both wound up closed down when riots proved to disincentive visitors enough to stop coming. Paducah had a small public amusement facility in Nobel Park which closed down in 1988. That park turned out to be a showcase of sorts for its owner, Grover Watkins. Watkins was a ride manufacturer who wound up producing 400 attractions during a period of 4 decades, including the exceedingly popular Hustler/Tempest attractions that are still found on many a midway today. 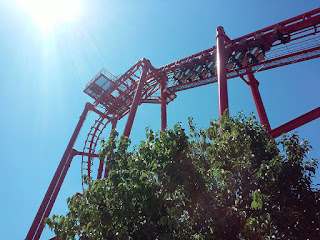 There are two permanent parks of substance in the state: Kentucky Kingdom is the biggest and most well known. Opened on the Kentucky State Fairgrounds, Kentucky Kingdom has undergone multiple iterations and a long term closure that spelled near doom. Today it is back under the guidance of Ed Hart and is resuscitated into a park pulling something like 3/4 of a million people a year. Food here is slightly above the mean for theme parks in the US, and the coasters are on average way better than you'd expect from a place of this scale. The Rocky Mountain Coasters creation Storm Chaser replaced the dueling CCI wood coaster Twisted Twins/Sisters in the back of the park, while up closer to the front, the station from Greezed Lightning (a Schwarzcopf shuttle loop) was repurposed for Lightning Run, a super intense and overall excellent ride from the good folks at Chance/Morgan. There's a Vekoma Roller Skater, a Vekoma SLC (with new thighcrushing trains), and a reasonably good wood coaster as well among the big rides, and a smart selection of flats like a big ARM drop tower and Huss Enterprise. The water park here is also well themed and features a solid selection of attractions with a big HydroMagnetic Rocket anchoring. 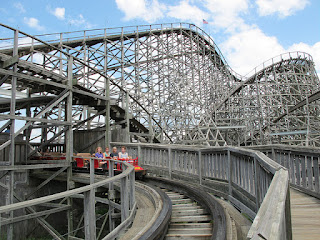 Beech Bend in Bowling Green is a strange duck: It is an amusement park/speedway hybrid, the last of its kind. Unlike Holland Speedway (track first, amusement park second) in New York or the late Riverside Park Speedway (park first, speedway second), they kinda have equal billing. Oh, and it isn't an oval track like those, but rather a drag strip. The park itself features a wood coaster from GCI (Kentucky Rumbler) that's really good, two spinning coasters (Wild Mouse and kiddie coaster), a dark ride, antique cars, and the Pirate Ship that belonged to Michael Jackson's Neverland park. And it plays Thriller all the time. The water park here also has some really cool newer slides. It ain't bad!

There's a whole underground world in Kentucky worth exploring. You likely already have heard of Mammoth Cave National Park, but consider for a moment the existence of Mega Caverns in Louisville. Once the site of a limestone mine under the city, the caves created by this are so huge that there is now underground zip-lines and BMX/mountain bike trails. More along the theme attraction lines is Portal 31 Exhibition Mine in Lynch, where visitors can ride an old mining train down past animatronic figures. This is located deep in the hinterlands, several hours from any significant cities.

Louisville Zoo has a nice collection of animals and, like many zoos, a miniature train and carousel to ride. It too is reasonably priced with themed sections and the like. None of this is abnormal to see being subsidized by tax payers. But how about a collection of mostly animatronic animals inside a giant wooden boat from the Bible? Ark Encounter, the big theme park-esque offshoot of the Creation Museum, is precisely that thing. It is a real life Ark built to the specifications of the Bible and featuring an array of robot Biblical figures and creatures along with a movie about the Flood and some nonsense that takes the entirety of plate tectonics and throws it out the window. I mean, its is a big thing and its a big thing that is open often quite late, but its also morally questionable to support for a lot of folks out there. Even if you're Catholic, you don't buy into this literalist interpretation. Some $40 million dollars of tax payer dollars have been thrown behind this in an effort to attract tourists. Good luck? Not all that far away is Big Bone Lick State Park, home to a ridiculously absurd and huge diorama featuring megafauna statues being swallowed by a tar pit. Are you not yet entertained?
Posted by Alan Conceicao at 10:01 PM

Email ThisBlogThis!Share to TwitterShare to FacebookShare to Pinterest
Labels: Hidden Rides and Themed Attractions of..., Kentucky