Ignoring, for a moment, the sometimes harsh winter, if someone were to ask me, "What are the negatives of living in Michigan?," I'd have two responses. One: Having to constantly explain to people that the entire state does not resemble post-industrial Flint in Roger & Me. Two: There aren't any really good amusement parks here. That is quantitatively a thing that matters primarily to me, as many people here have simply moved on to other things in the years since most of the state's significant facilities closed. But there are definitely still things. Some of them are even pretty big.


In the known category, two parks jump right out. Greenfield Village in Dearborn is likely the highest attended theme/amusement attraction in the state on an annual basis. Constructed starting in the 1930s by industrial magnate and inventor of the assembly line himself, Henry Ford, it is a loving tribute to America (with some England too). Ford believed in preservation, and he also believed in owning things, so he bought tons of historic homes and businesses, put them on trucks, and rebuilt them on his property. The Firestone Family Farm, the Wright Bros. Bicycle Shop, a replica of Edison's Menlo Park workshop, steam trains, a Herschell Carousel, and Model Ts are all present to experience both inside and out. For more traditional wares, there's also the Cedar Fair owned Michigan's Adventure, located near the beaches of Lake Michigan in the city of Muskegon. Famed in coaster circles for being home to Shivering Timbers, a massive wooden out and back coaster that once was so beloved it gave rise to the "Church of Shivering Timbers." Times have changed, and the ride, while still very good, is not nearly the universal top 5 pick it was. The park is also very often slammed with people, but being where it is, staffing is a real issue and capacity is kinda bad. Really bad. Not nearly as bad capacity wise, but being something you can't visit without a child, is Legoland Discovery Center in Auburn Hills. There's a trackless Kingdom Quest dark ride here.

Enough about those: let's talk about stuff that's more obscure. Maybe it'll even more interesting! Should we shoot our load immediately and go right to the death cult amusement park? Yes. Yes, I think the death cult amusement park is a great place to start. Not far from the Indiana border in the town of Benton Harbor is a miniature train surrounded by ruins. If you aren't aware that it's there, you probably would never stop in, but what remains of House of David's Eden Springs is actually really awesome. In it's prime, this was a "show park" - there were baseball games, concerts, and plays. The major rides were trains; there were several different lines traversing various parts of the grounds, with tall trestles built to navigate the trains over gaps in the terrain. There's just one running today, with plans to fix up one of the trestles and lengthen the line having been pushed back now for several years. The old House of David, a turn of the century "doomsday cult" that demanded celibacy and thus effectively died out in the mid-late 20th century, still exists and have their split compounds near the park grounds in huge mansions. For something a little more joyful, St. Joseph (a neighboring town) has a beautiful Carouselworks carousel on the site of what was Silver Beach Amusement Park. A small museum about that defunct park is also present at the carousel site.

Staying on the Lake Michigan coast, heading north sends you to the city of Holland and the small park known as Nelis' Dutch Village. There are no roller coasters or dark rides present, but the theme of a dutch town with shops and wooden shoe adorned dancers is buoyed by doll collections, an ancient circle swing attraction, carousel, and Eli Wheel. Bringing slightly more excitement to the table are the Mac Woods' Dune Rides up on Silver Lake, north of Michigan's Adventure. There are real live dunes out here, and they're huge. For those seeking straight up thrills, rentals of dune buggies are available elsewhere in the area, and sand drag racing happens fairly frequently. For those with more pedestrian tastes, Mac Woods' runs heavily altered F-350s which end up doing a combination of ecotourism, Jungle Cruise (the puns! the props!), and middle eastern wadi bashing.

Heading east across the state, there's more failures then still existing properties. Battle Creek was home to Cereal City USA, Kellogg's attempt at spicing up the factory tour with animatronics. It lasted 10 seasons, and now is a school. Ramona Park in Grand Rapids closed in 1955: the local library has mementos on display in its historical archives room, and a painted mural on a parking structure reminds people of it's past location. Deer Forest in Coloma was sold, pieced out, turned into a wildlife rescue center and handed to a relative of the owner with a history of animal cruelty. It has stood abandoned for several years. Deer Acres in Pinconning closed nearly a decade ago, though the gates open once a year for a car show as they "work on the park." Lake Lansing closed in 1974, though its wood coaster had been shuttered long before that. All of this is pretty well gone and never coming back. But there is hope burgeoning in some unlikely places.

I'll start in the Irish Hills. Located roughly between the cities of Jackson and Detroit, this region has been a magnet for tourism since the late 1920s. Not much of the prime eras are left: the Irish Hills Towers are on the National Historic Registry but on the verge of demolition. Tourist traps like Frontier City, Fantasy Land, and Prehistoric Forest are all closed up. Cedar Point of Michigan was a thing that was designed and for which land was purchased, but never actually happened. What's left? Well, there's the Michigan International Speedway, but it isn't themed or a ride. Then there's the Stagecoach Stop and Cowboy Creek Lodge: once known as Stagecoach Stop USA, it was a small western themed town and amusement park that lay dormant between 2008 and 2014, reopening sans rides, but with the other western elements incorporated. And then there's Cell Block 7 in Jackson: a former wing of the Michigan State Penitentiary, it has become a museum detailing what life is really like behind bars. Just don't expect many pictures from me of it: photography is strictly forbidden. Finally, Mystery Hill, a Gravity House attraction much like the Mystery Shack of Knotts fame (and of a style somewhat immortalized in the cartoon Gravity Falls) still runs in Onsted.

There are a number of railway based attractions in the state which have expanded into much larger complexes beyond just the Eden Springs. Substantial tourist railways exist in Coldwater (Little River), Tecumseh (Southern Michigan), and Coopersville & Marne Railway (Coopersville), but they are generally somewhat limited in scope. Crossroads Village outside Flint has a 4-2-4 train and carriages, but also features a rare combination of CW Parker carousel and ferris wheel (one of 4), plus paddleboat rides and a historic village. Detroit Zoo has an set of incredible old trains fabricated by Chrysler (one-offs) along with an amazing penguin enclosure themed to Antarctica, 4D theater, motion simulator ride, and carousel. John Ball Zoo is not to be outdone, featuring a modern electric funicular. Binder Park in Battle Creek (a phenomenal zoo far beyond the expectations anyone should reasonably have for Battle Creek) also has a train ride along with a carousel and an incredibly well done Savannah section reached by lengthy tram ride.


Only recently have amusement park historians and enthusiasts started to uncover the attractions of Northern Michigan. St. Ignace, sitting in the shadow of the Mackinac Bridge, also features a gravity house (Mystery Spot) with a scenic overlook atop a cliff. Billboards and flyers are bountiful throughout the lower peninsula of Michigan, so this is fairly commonly known. Mackinac Island itself is host to a permanent haunted walk-through attraction, The Haunted Theater. These are easily the two most seen by tourists in and to the state. But there's more. Oh yes. Much more. 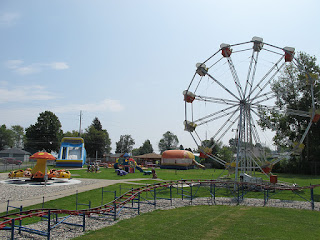 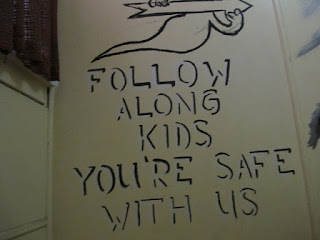 Going back south a bit in the lower Peninsula, several amusement parks and roller coasters have been "discovered" by hobbyists. The first of note is the area around Houghton and Higgins Lake, 3 hours north of Detroit. There's an outpost of Pirates Cove mini golf here along with two small amusement parks. The first of these, Funland, has operated since 1956, and is home to a mix of kiddie rides, an Eli Wheel, a Herschell kiddie coaster, $1 mini golf, and a water slide for the kids. Just up the street is Lakeland Recreation, an unassuming name for a substantive family entertainment center. There's the obscenity of gas power bumper cars, go karts, mini golf, and driving ranges, but most important is the existence of Haunted Mansion, a walk-through haunt attraction, self constructed in what was clearly a former private residence. No actors, just stunts and props. It's pretty awesome.

East of this on the Lake Huron coast are a few more family entertainment/small amusement park type spots. Kokomo's in Saginaw has the Americana/Lesourdesville Lake "Serpent", a Zyklon coaster which opened in its current location in 2009. Further north in Alpena is Arzo's, a small park with an old school 1950s era simulator attraction, Majestic scooters, a Dragon Wagon coaster, and Gravitron, among a few other things. They've all been joined in the last year by Cedar Valley's Wild Frontier Fun Park in Comins, which has a wild west theme and is composed of mostly vintage portable rides, with a roller coaster slated for installation in 2017. All the way up in Sault Ste. Marie, The Haunted Depot is not merely a Halloween store, but a year round haunt almost within view of the Canadian border.

One thing about the history of the United States is that our great industrialists were not often men of great wealth as kids, but self-made, establishing empires off their vision. In the theme park world, there are some men who are attributed with this kind of forethought, but that individualistic vision is seen even at the smaller scale. Marvin's Marvelous Mechanical Museum is an example of that: built by the late Marvin Yagoda, this insane arcade located in the Detroit suburbs is not the largest by square footage in the area, nor does it have the newest games. It may even with the size constraints given to it, have the most attractions and games in the region, as it is simply stacked and packed with things to see. Marvin loved old arcade machines, Detroit, and the amusement industry as a whole, and it shows when you go in and see the pieces which he's collected from throughout the world for display. Yes; you could go to CJ Barrymore's in Clinton Township for their zipline and looping Zyklon coaster instead, and they run a nice clean operation out there, but you'd be missing out on a real gem by not coming here too.

Michigan's cultural exports in the realm of music are fairly diverse: Diana Ross, The White Stripes, and Derrick May just show faint glimmers of the spectrum. Part of that spectrum unquestionably is the strange devotion to the hip hop subgenre of "horrorcore," first with Esham (considered by some the progenitor of Eminem's style) and later with the much more popular Insane Clown Posse. That "Juggalos" and "The Dark Carnival" got its start here in Michigan begins to make a lot more sense when one admires the sheer number of large Halloween attractions in the state. Erebus in Pontiac held the world's record for the largest haunted attraction from 2005-2009, but there are many, many more. Starting in September, you can actually pick up publications that list some of the likely 3-figures of haunts ranging from massive carnival/hay ride/haunted house extravagazas to "haunted monster truck rides" to kid friendly corn mazes.