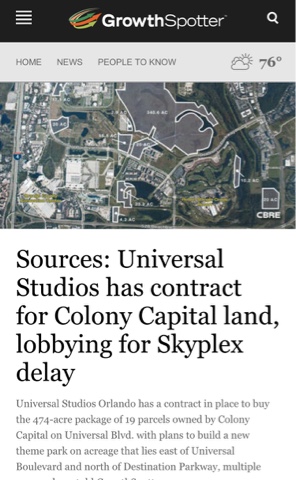 GrowthSpotter.com reports (behind pay wall) sources have informed them that 474 acres of land owned by Colony Capital is being purchased by Universal Orlando Resort for expansion of a third park and additional resorts. The leak occurred during the approval meeting for the Orlando Skyplex, a project Universal Orlando Resort has blocked. Confirmation from Universal at the meeting about their contract leads us to expect this was a planned move to possibly thwart the Skyplex project and their claims of studying the land Universal already owns.

This land was originally owned by Universal Orlando till the 2000s, when under financial hardship during the recession and poor ownership, the land was sold to Lockheed Martin. The lack of additional land created a Disneyland-esque situation where UOR was quickly becoming an island in a city sprawl. This land purchase will work with the Wet'n'Wild land to add more hotels, shopping, dining, parking, transportation hubs, and possibly another theme park to the resort.