Festivus for the Theme Park Us 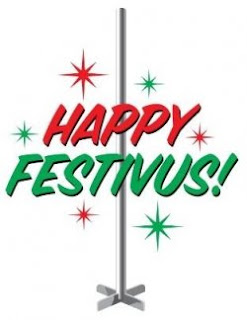 Today is the day where we forego the stress and commercialism of this time of year and celebrate around the adorned aluminium pole. To the uninitiated, Festivus was brought to the public forefront in 1997 through the TV classic ‘Seinfeld’ as a holiday excuse for George not to give co-workers gifts and for Kramer to take off work.

So finish up your Festivus meal around the aluminium pole and lets kick it off with some theme park Festivus activities...

Universal Orlando, you have parks with some of the most beautiful lands and areas in theme parks seen at night, so why do you close your parks so early? A 10PM closing should be a normal occurrence, not a rare event that only happens during the summer and at Festivus (and Christmas too, I guess.) Additionally, odd restaurant and quick service hours cause issues finding a good place to eat in the parks. Why does Mythos close at 3pm while the park is open till 7? I understand the desire to have guests to go CityWalk, but even CityWalk isn’t fully open till dinner. Take a page out of Disney’s book and expand your operating hours to match the demand

Walt Disney World, you differentiate yourself with the super cool monorail system that connects the Magic Kingdom, Epcot, and several deluxe resorts. It’s of of your signature features in the resort, so why have you let it rot away? Yes, some carpets in the monorails have been changed out, but lots of them still look worn, AC is incredibly weak, smell bad, and stories of the monorails going down happen frequently. The Parks and Resorts division is claiming record attendance and profits, so why not spend the money to upgrade your monorails to the futuristic and sleek transportation system that it is!

Universal Studios Hollywood, you’re entering the big leagues next year when The Wizarding World of Harry Potter- Hogsmeade opens on the west coast. You’ll add two new attractions, many cool new shops, and new shows. But why can’t the same attention and care put into Harry Potter be extended to your parking situation? Crazy traffic flows, scattered parking garages, and now no annual passes include free parking. For a park that treated its annual passholders well and was supported by said passholders through ugly times, the lack of parking options is ugly.

Let's not rumble, son. Folks we get it, you're strong and have had a few drinks. Please stop acting tough and fighting Halloween Horror Nights scare actors? Some of the coolest and best scare actors have left the event due to stupid guests, so lets end this now. Scare actors in scare zones and houses are not just amazing actors but are amazing people. Please, just wrestle your dad.

About positive feats of strength, need I say more than these two tweets?

IT'S A MIRACLE! Star Wars land has been rumored for decades, and finally with the release of The Force Awakens around the bend, Bob Iger announced the new land at D23. And woah, if The Force Awakens is any indicator, this land will be the bees knees. Incorporating all of our favorite planets into one rim planet was a sort-of stroke of genius as we now can experience all our favorite locations without that weird necessary issues of planet traversal or story! With many insiders worrying Disney would spend "their time" and wait for any sort of announcement or building, this was a great surprise to have. 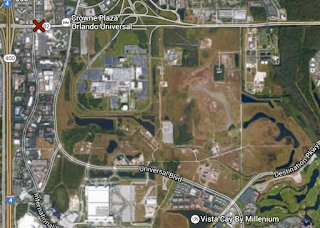 But what about another new theme park in Orlando? Today, the Orlando Sentinel leaked Universal Orlando finished the purchase of 450 acres of land for future development. With this much land Universal can build new resorts, CityWalk, and a new theme park. And with "green lights" ahead we're really looking at a bright future.
Posted by Joe at 11:23 PM