A Universe of Possibilities

So last Wednesday, September the 11, NBC/Universal CEO Steve Burke dropped some pretty big truthbombs on us at an investor conference. In his speech, Burke continued to parrot Comcast's bullish theme park talks, saying how much the company has taken to the new line of business and how happy they are that it's performing so well. But they're clearly not satisfied with what they have now, and the aggressive expansion timetable we've become accustomed to the past few years in Orlando will be ramping up to even faster speeds, if that can be believed. Below are the finer points of his speech.

As you can see, Burke touched on a lot of big points, including some fighting words thrown in the mouse's direction. Let's cover them one at a time, shall we?

First, let's take a look at the claim the resort can stand to carry 10,000-15,000 rooms on property. Compare that to the 2,400 rooms they currently have, and the 4,200 rooms they'll have once Cabana Bay Beach Resort opens next year, and it's clear just how big Universal Orlando Resort is looking to be. At the very least, management plans on more than doubling the current number of rooms at the resort.

Before we get into where they could be going or what themes they'll be, let's take a look at the existing Universal Orlando Resort area. 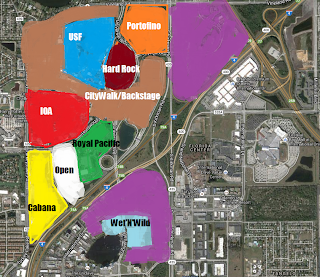 As you can see, Universal has only one plot of open land left on the existing resort, which is promised to Loews Resorts as the sight of the fifth onsite hotel. And even if said hotel was a large tower resort it would only add up to 1,800 rooms to the resort, and that is a generous estimate.  So where will all these rooms come from?

It's obvious, to me, that Comcast is going to have to shell out some money and buy more land surrounding the resort. The question is, where? I highlighted the most logical areas in purple. I also think they could probably acquire more land to the south, but I went with a conservative estimate for now.

The plot of land to the east is a bit bigger than what Universal would be able to acquire. A good quarter of that land will be used in a redesigned I-4 exit, but the rest will be unaffected. The Double Tree and Holiday Inn Express by UOR are the most notable things occupying the land at this moment. The rest is a few chain restaurants and smaller end hotels. This would probably be the more expensive land acquisition if it panned out the way I'm thinking it could. It's relatively insulated, and will allow for more of a "resort" feel once Uni is done with it.

The land to the south along International Drive, however, offers up some bigger challenges. First, as stated, it's bisected by I-Drive, and is possibly one of the ugliest/rundown areas of the Orlando area.  Theoretically the land would come cheaper here than it would to the east, but UOR and Creative would have to work hard to hide their nice resorts from the urban blight around them.This area also includes Wet'N'Wild, which presumably should be making way for a new water park at some point in the future.

So, those are my hypothetical placements for future hotels. Now comes the fun part. What could Universal theme these extra 5,800-9,800 more rooms to? Well, I have a few ideas that come from Universal's older plans, as well as some new ideas.

First, let's take a look and one of Universal's most recent dropped resort concept, the Silverscreen Resort, more info on which can be found on Park Rumors. 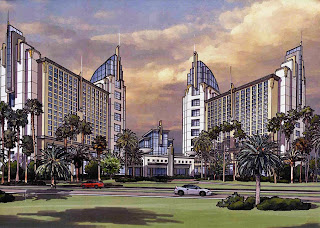 The resort's classic Art-Deco exterior and massive towers were originally planned to occupy the north half of the land that is now becoming Cabana Bay Beach Resort, with the south remaining earmarked for future development. The high room count and fantastic artistic design would make it a beautiful choice for anchoring one of the new areas potentially bought by Universal

However, there is another older concept that I think would be the optimal choice to round out the development of the existing resort area. Which one is that? Well, the Royal Egyptian, of course. 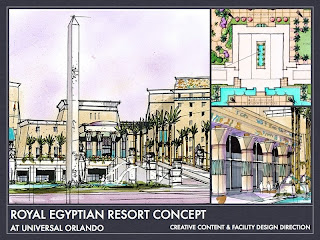 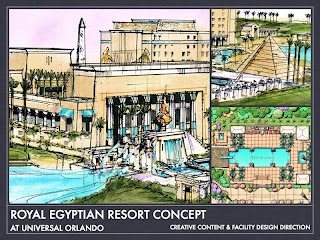 As you can see, the theme of the hotel was going to celebrate the splendor of ancient Egypt along the Nile river, with plenty of reflecting pools and sunny areas. The Royal Egyptian existed in a different version during the planning of Universal City Florida, which you can see and read about over on Park Rumors.

While looking on their site for pictures (which they graciously allowed me to use, thanks again!), I noticed a very, very interesting little tidbit. I had believed the resort was cancelled and forgotten after MCA decided to build a smaller version of the Royal Pacific than what had originally been planned, but then I saw the 2007 addendum to the Universal City plans. 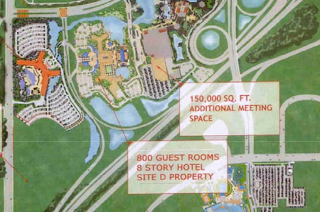 See that 800 guest room hotel in the middle there (also notice the Silverscreen resort to the west)? Study the layout and design for a second. Got it? Well, now look at this. 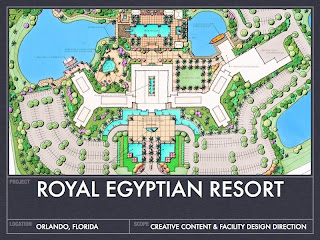 Same thing, no? So, up to 2007, Universal was still planning on building the massively themed resort with connection to the Universal water taxi system. Also telling is that the Silverscreen resort planned for next door was supposed to be 1,800 guest rooms. The same as Cabana Bay. I'm probably getting my own hopes up here, but I think they would see this as a perfect resort to finish off the central resort complex. It would be a fourth, and possibly final, deluxe level resort, and the location dictates that. Hopefully Universal and Comcast feel the same way.

As for concepts beyond that, it's nothing but blue sky. We all know Harry Potter is Universal current bread and butter, but I don't see a resort concept coming of it. I would love to see them get the Major Boulevard plot to the east and build a few resorts around a manmade lake. Maybe their own version of the Boardwalk concept? Also, to the south on I-Drive, I'd like to see them theme the hotels, or at least one hotel, to the same thing as whatever they make the waterpark. Would be a nice way to tie an area together.

So, as exciting as new, themed resorts are, let's look at the real reason we're all here: the attractions. We all know Transformers and Springfield opened this year, and next year we get Wizarding World of Harry Potter - Diagon Alley. But what about after that? Mr. Burke seemed pretty set on wanting at least an attraction every year for the resort. So what do we think is on the horizon? Let's take a look.

The first big rumor, which seems to gain traction with every passing day is that a Jurassic Park expansion is on its way for 2015. We covered some speculation on this here, so I don't want to get too deep into it. But this should be a pretty awesome expansion. And to add some more food to the fire, here's a survey maker back behind Thunder Falls Terrace for the project. 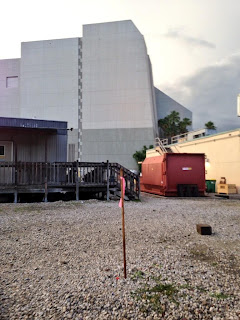 Another rumor gaining steam for 2015 is the addition of a Lorax dark ride featuring elaborate sets, animatronics, physical effects, and screens. Conventional wisdom says the attraction will take the remaining expansion plot in Seuss Landing, shown below.

Adding another family dark ride with a limited or nonexistent height requirement is crucial for the resort if they truly want to move forward as a family destination.

Another rumor, also from Hatetofly, is that a new version of King Kong will be replacing Disaster, also in 2015. personally, I think one of these three projects would need to be moved to 2016, and Kong being in the park that just got Diagon Alley would be the best bet in my opinion. Though it is also rumored this is being done due to a problem with the Disaster ride system, so it's possible this cannot be pushed to another time.

Outside of these three solid rumors, we have plenty of other, more nebulous works on the way. Warner Brothers's CEO has mentioned that JK Rowling's new movie in the Potterverse, Fantastic Beasts and Where to Find Them, is already in works to be a theme park attraction. Lands like KidZone and Toon lagoon are falling quickly behind the rest of their respective parks in terms of drawing power and profitability. And of course there are things like the plot between Men in Black and the Simpsons Ride or Shrek 4-D that are prime for replacement. And what about the water park? I think Comcast sees Wet'N'Wild as an embarrassment, personally, and believe it will be replaced with a more themed and state of the art park by decade's end.

But one thing is for sure: Universal and Comcast are continuing their bullish behavior in the Orlando theme park market. They are continuing to push the envelope, and I for one hope that continues for the foreseeable future. As always, keep it tuned to @Parkscope for up to the minute updates.