So, another day, another round of Universal Notice of Commencements.

The first is between Universal and Advanced Entertainment Technology for Equipment Installation. The company has worked with Universal in Hollywood, Orlando, and Japan, but I can't gather from their site exactly what they've done in the past. I assumed it might be for Transformers, but the absence of Singapore from the list throws that into question. 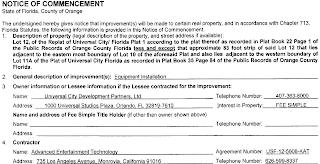 Next up, there is a NoC for a new lagoon wall in the Central Park area of Universal Studios Florida.  The work will be done by everyone's favorite themed set builders, Nassal. We uncovered a permit detailing a new lagoon wall last week, and we thought that it was for the Simpsons area.  The NoC links it to the building permit filed last week.  For those who remember, Project 315 PM was the project name for Universal's Cinematic Spectacular show, so this change has something to do with that. 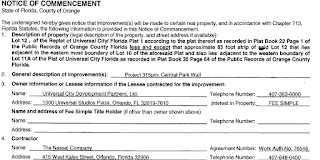 The latest updates to the building permit say:

"Constructed on top of existing rockwork."

The permit has essentially been issued (everything has been approved), so work should begin soon.

As always, stay tuned to @Parkscope for updates.
Posted by Sean at 2:18 PM