As I mentioned in Part 1,  I spent the first part of Day 1 in Walt Disney World, but I made my triumphant return to Universal Orlando that afternoon.  The night before, I ordered my Annual Pass online.  I picked it up quickly and seamlessly at an Islands of Adventure ticketing kiosk.  I then purchased my Rush of Fear pass for Halloween Horror Nights at an Islands of Adventure ticket booth with the Annual Passholder discount.

I gleefully ran into Islands of Adventure with the Wizarding World of Harry Potter as my destination.  Potter deserves its own trip report, so I'll save it for Part 3.   After Potter, I walked to Spider-Man.  Along the way, I got lost in Toon Lagoon, and I am embarrassed to say that this always seems to happen.   Something about the layout of Toon Lagoon gets me turned around. 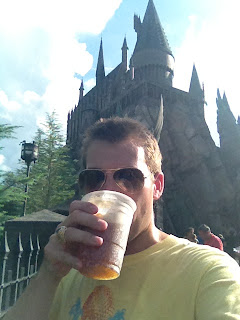 The Amazing Adventures of Spider-Man received a well-done refurb.  Many people consider it one of the best theme park attractions of all time, and this refurb will only improve its case.  The new film is very crisp and will keep this attraction relevant when Transformers opens in Summer 2013.  My one criticism is the photo-op they have added in the queue, but it can be skipped, and more importantly, it does fit.

After Spider-Man, I headed over to Universal Studios for Halloween Horror Nights.  The weather was looking very ominous as I waited in line for the gates to open.  I got in the park and met up with friends.  We had just got under the overhang of the Gothic queue when the sky fell.  It rained and it rained, the deluge...When we got out of Gothic, it was still POURING.  We made a bee-line for Finnegans and spent most of the night there when it rained.

Gothic was considered by most to be the best house of the year.  I do not agree with that, but I was a HHN virgin.  During a break in the rain, we ran over to House of Horrors which was cool.  After House of Horrors, we did Alice Cooper which was located near the exit of House of Horrors.  The best part of Alice Cooper was the stripper room.  It then rained some more, so we spent some time in Spongebob Storepants which is a home run as far as stores go.

Later in the night, after watching some football in Finnegans during even more rain, we headed over to Fear Factor Stadium for Bill and Ted's Excellent Halloween Adventure.  I had no idea what to expect, and I absolutely LOVED it!  It reminded me of how I used to feel in Pleasure Island.   I love adult humor in a theme park setting.  The week after I got home, the show was involved in controversy when a conservative blogger complained about a segment involving Barack Obama and Mitt Romney.  The segment was harmless.  Some people just have no sense of humor, sadly.

For those who did not get to attend the show, it is a parody of pop culture from the past year.  Among other things, it featured The Hunger Games (with a very attractive Katniss), Merida from Brave, Snow White, Mad Men, the presidential race, and a Mayan ritual.  The show featured scantily clad women (and men), pyrotechnics, singing, rapping, and dancing.  Excellent!

To cap off the night, we did Dead End which was and remains my favorite house of the year.

After an ill-advised trip to Gainesville, I was eager to get back to Universal on Sunday.  After dropping off a friend at MCO, Taylor and I picked up Sean (Parkscope) and headed to UOR.  Taylor dropped us off and Sean and I headed to Islands of Adventure to meet up with Nick (Mr. X) and his lovely wife.  While waiting for Nick, Sean and I rode Hulk, Forbidden Journey, and Hippogriff.

We caught up with Nick and his wife in Hogsmeade.  We did a group ride on Forbidden Journey and Spidey.  While in the Spidey queue we talked about how many kids we have seen at UOR and how the resort gets a bad rap as not being "kid friendly."  We waited in an extended queue of Spidey which I was not aware existed.

We bid Nick and his wife farewell in Port of Entry, and we headed over to Universal Studios where I rode Hollywood Rip Ride Rockit for the first time.  We waited longer for it than it is worth, but it was not as bad or as good as I was expecting.  The best part of the attraction is the lift hill which legitimately  scared me.

The Mummy had an unusually long wait.  When we finally got to the loading area, we saw that they were only operating one side.  We went again the next day and they were still only loading one side.  Perhaps they had not planned for the crowds or the other side was broken, but both sides needed to be operating.

Later in the day, we did the Horror Make-Up Show.  It was my first time seeing the show, and I did not know what to expect.  The show is very well done and funny.  It was another thing that, like Bill and Ted, reminded me of being at Pleasure Island.  The other day, I realized our host was Summer Aiello (Michael Aiello's wife.)  She did a very good job, and she follows me on Twitter.  Cool all around!

After Horror Make-Up, I think we headed to Islands of Adventure to eat at Three Broomsticks.  After dinner, we took advantage of the special HHN walkway between IoA and USF.  Along the way, we scoped out the area where the alleged Seuss expansion is set to take place (word online is that they are waiting to finish Transformers or Simpsons first.)  We actually got into HHN earlier using this entrance.

Before the crowds got terrible, Sean and I were able to do Walking Dead, House of Horrors, Alice Cooper, and Penn and Teller.  When we got to Dead End, the crowds had gotten very thick.  The crowds never let up from that point on.  I never got to Silent Hill.

Later in the night, we met up with Matt (Mr. EPCOT.)  Together, we caught one last show of Bill and Ted and rode Despicable Me.  Minion Mayhem is very well done and a superior replacement to Jimmy Neutron.  I am very happy for Universal that they were able to make a family friendly movie of their own for once, and this should be a classic for all ages for years to come.

After Minion Mayhem, we called it a night.  Halloween Horror Nights is a ton of fun, but next year, they need to expand.  With Jaws gone and Transformers blocking streets, the crowds were thick.  I will return in the future just to see Bill and Ted.  As I mentioned earlier, Dead End was my favorite house.  I   got a legitimate scare that made me jump in the very last room.  My second favorite was House of Horrors.  The use of strobe lights really messed me up.  I did not care for Penn and Teller very much.  Walking Dead was pretty cool as we got to do it basically alone.

Sean and I hit UOR pretty early on Monday.  We went to USF first and tied up loose ends.  This was my first time on Disaster since they changed it from Earthquake.  The refurb was well done.  The Musion effect with Christopher Walken is seamless.  After Disaster, we headed over to Terminator.  Terminator was another first for me.  I have not seen a Terminator film, but I enjoyed the attraction very much.  The mix of a 3D film attraction with live action and actors is very cool and surprisingly unique (save for the one character in Muppetvision.)

After Terminator, we headed over to IoA before Sean had to leave for the airport.  We rode Cat in the Hat, Spidey, and Dragon Challenge.  From Dragon Challenge, we were able to see construction of Hogsmeade Station which is coming in the expansion of the Wizarding World.  Sean and I both got Butterbeer, and we relaxed behind Three Broomsticks.  The Three Broomsticks outdoor seating area is a great place to get away from the hustle and bustle of WWoHP.

I bid Sean farewell and headed over to USF to catch Animal Actors.  It is a very cute show, and it is something that is quite at home in a studios park.  After the show, I watched Potter and Transformers construction from the Simpsons waterfront (which is now walled off.)  I walked back over to IoA to get in one last round of Potter before it closed.  I bought the souvenir Butterbeer mug and nursed its sweet nectar as I slowly walked to the exit. 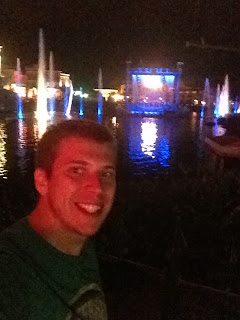 After IoA, I returned to USF for Cinematic Spectacular.  While I waited for the show, I did Minion Mayhem one more time and bought a Minion plush for my girlfriend.  I also walked around USF at dusk for the first time, and it is very pleasant (and very different from HHN!)  I loitered along the London Waterfront for a bit, and then, I found a place to watch Cinespec around Central Park.  The show is incredible and gave me goosebumps.  I will have to give a proper review in a separate post.  The lasers seemed to add alot.

I was very sad to leave Universal.  That is latest I have ever stayed in a Universal park as they usually close early.  The addition of Cinespec is a game changer in that it gets people to stay later and experience the ambiance of USF at night.  Nighttime is something Disney does spectacularly well, and it is something that Universal desperately needed.  Go see Cinespec people!!!  Now, IoA needs a nighttime show!

After Universal, I went to Polynesian, bought a Lapu Lapu, and watched HalloWishes for free from the Polynesian beach.  I then relaxed for a bit at the boat dock, took the Motor Launch to the Magic Kingdom and then to Grand Floridian.  I met some friends in the Citricos bar where we had some very well-made drinks and sang Adventurers Club tunes.  It was a fitting end to a great trip.  I cannot wait to go back!