Sometimes you leave things in the drafts too long and it spoils. That was me with an article about Universal's plans into regional entertainment. I'd cover the Toothsome that opened in Philly and the trademark filings. Then it sorta split off into the PortAventura article but another part was about other local attraction rumors. I largely wrote off the concept in my head, DisneyQuest had failed, so would this.
This makes this past week's announcement of a new mini-theme park in Frisco, Texas, and Las Vegas, Nevada so wild. Many of us had written such rumors are decades-old speculation and tomfoolery run amok, harking back to a day when Disney was about to announce a theme park in insert major city here was comment theme park gossip blog fodder. "Disney is building a theme park in Texas" is a meme from the 90s!
Anyway, these will be two very different projects. This article will combine officially confirmed information with my own informed speculation, blue-sky ideas, and informed guessing. Quote at your own risk!
Universal Kids Mini-Theme Park - Frisco, TX 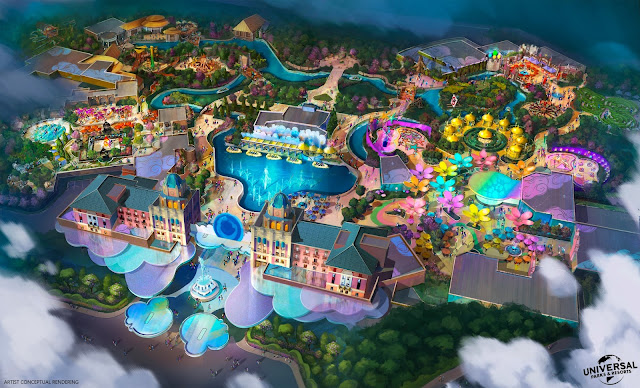 A 25-acre park on a 47 acre plot of land. Park is a themed family entertainment center with a focus on kids. Seriously, it's focused on kids and features meet and greets, play areas, small flat rides, and family coasters. Attractions are small in scale but fit into something slightly larger than Hogsmeade in Islands of Adventure. In front is a hotel, which claimed to be 300 rooms but could be an ad-lib, and highly themed entryway reminiscent of the DreamWorks logo. Inside we can find lands based on Kung Fu Panda, Jurassic Park Camp Cretaceous, Shrek, Trolls, and Madagascar - all DreamWorks movies. So no Nintendo, no Secret Life of Pets, no Harry Potter, no Minions. We'll get into that later.
The theme park entrance hotel is a new concept for Universal - both location and scope. At 300 rooms (reportedly) this is Universal's smallest hotel which begs the question of how much will this hotel cost? Hotel, remember, not resort. So likely no elaborate pools but probably on-site full-service dining and maybe Express Passes? I could see these hotel rooms being copies of the popular Endless Summer 2-room suites which start around $145 a night. The wild card is Express if included which could hike the price 75-100%.
Universal focusing on properties they own makes sense - they don't have to pay additional license holders and the prices can remain competitive. Let the resort destinations with their expensive tickets and big hotels soak up the costs of licensing. Second, why DreamWorks? Well, that is something unique in Universal's portfolio - similar to Marvel and Disney, DreamWorks licensed their name and properties out to a bunch of places. That is why DreamWorks areas are found all over the world totally separate from Universal. This could be a way for Universal to re-establish its broadly licensed properties. 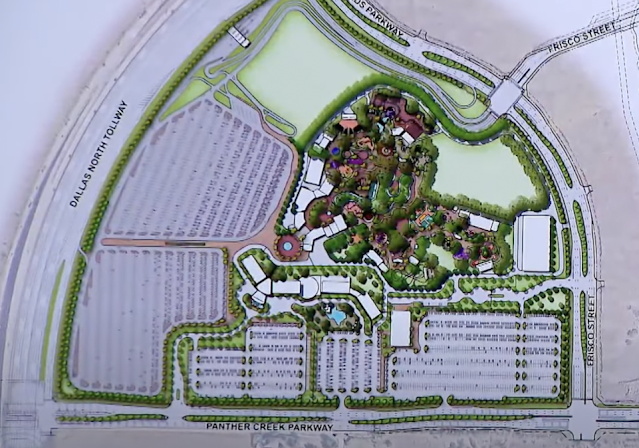 Shortly after the announcement the above image was found as part of the larger Frisco development project. As you might notice the park appears different in here, with a different "hub" area and, what appears to be, USF's old KidZone at the bottom? Anyway, as you can see Universal is planning on two expansion plots for the project, either for a major attraction on the scale of Men in Black or Mario Kart, or could another mini-land. It is also easy to see how Universal performs a UOR and adds a parking garage to consolidate parking and then use the expansion plots for a new park. And if you permit me to daydream some, I think a mini-Volcano Bay in Frisco with Minions would be fun and unique.
Several people have named the park "Universal Studios Texas" which doesn't strike as true. No matter how much of the actual production aspect is removed from the Studios parks they are still themed to movie studios. I believe this park will eschew that familiar theming and really be Universal's fifth theme park type - Studios, Islands, Volcano, Epic, and now Kids. There are two ways for Universal to go with this project - retain the Universal name branding and create a familiar name - Universal Kids Frisco, for example. The other is to lean into DreamWorks and name it DreamWorks Destination Frisco. Maybe there is a third option I'm not seeing, but out of the two, I believe the more generic Universal Kids option might be the best option to future-proof the parks.
Six Flags over Texas starts at $39.99 for a single-day ticket while annual pass admission starts at $69.99 as of January 2023. It is hard to see this park being cheaper than $70, which is what Volcano Bay costs as of January 2023. An annual pass will likely start around the 2 1/2 visit break even, so around $300. Or the equivalent when it opens... hey wait...
Universal hasn't said when this new park will open, but we can take some guesses. The park still has some local political hurdles to overcome as well as winning the hearts, minds, and souls of the community (see; Disney's America). But once the project begins it will likely follow a Volcano Bay construction timeframe and take around two years to build. Assuming they start construction by this summer we could see this park open in the second half of 2025. Of course, local Frisco hold-ups or priority shuffling at Universala Creative might delay the project. The earliest the park could open is late 2025, and the most likely timeframe is the summer or fall of 2026.
#HNLV Horror Nights Las Vegas
Yes, this is my dumb attempt at making a hashtag, I'm unscrupulous!
Last year rumors popped up about a permanent Halloween Horror Nights attraction in Las Vegas. Just as the concept of a regional park was batted around for years so was a permanent HHN installation somewhere - either in a theme park in an existing park or a small side attraction. Seems we get the best of both worlds, a regional attraction themed to an existing theme park-created IP. 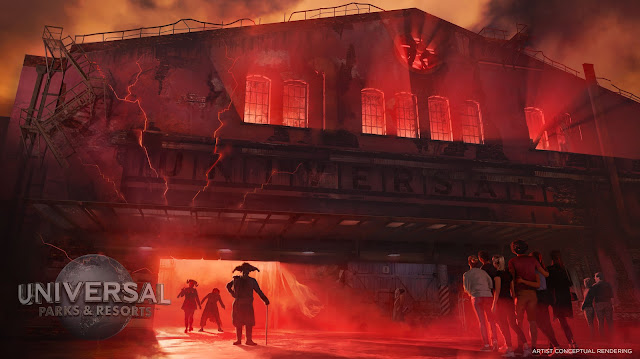 This all-indoor venue is roughly 2.5 acres in size, so even smaller than the mini-theme park in Frisco. Inside Universal says will be dining, bars, retail, and haunt attractions. I am expecting the interior to be smaller than Area15 next door but still feel like a hub for the various experiences. I imagine Universal would incorporate various themed elements in the hub including tech like projection mapping. I'm expecting restaurants and bars, so we might be seeing the expansion of more Universal restaurants out of the resorts and theme parks. Hell, maybe that retail is just a Tribute Store?
Universal's press release hints at a nighttime transformation, where the daytime spooks transform into nighttime horror. It is easy to see how Universal could sell this experience twice - once before 8pm and then a second time after 8. Maybe a free entry for the hub areas during the day with upcharge haunted house experiences, then a nighttime "invasion" of the hub into a scare zone with the houses included in admission. This concept also avoids the issue of Goretorium - it can draw in a general audience during the day that can switch into a more party atmosphere at night, it's not all horror all the time. It's a unique concept and I'm excited to see where it goes.

Anyway, as for the houses I have heard the plan is for three haunt locations with an open plan to move around houses and relocate them. For example, this could open with some best of options from Halloween Horror Nights, originals or IPs. A sort of victory lap for the best of the best. After all, how many of you all would say "oh man I wish I could do Scarecrow again". Well, you could! Or, more importantly, you might be able to in the near future.
The ill-fated Goretorium was $30 in 2013 before closing shop one year later. Accounting for inflation, that is roughly $38 in 2023. I expect Universal's horror attraction will have to be priced similarly, say $40 for all the houses during the day and $60+ at night with the entertainment in the hub. The real make-or-break will be how well they appeal to normies during the day and how well they keep the show quality for the haunt fans. If Universal figured these two issues out then they'll have a hit on their hands.
So, what will they call it? Universal calls it a year around horror attraction, but I'm calling it Universal's Horror Nights Las Vegas. It uses the brand name and also doesn't tie it just to Halloween. On the other hand, they could go for something totally different, such as Universal's Monsters and Mayhem or something else out of the left field.
With its smaller footprint and hanger-like design it seems this project is simpler to build - somewhere around a year of construction and theming. Meaning we could see the project opening as soon as February 2024. That is an optimistic time frame, so I would say something in late 2024 or early 2025 is more likely.
So What Else...
A flood of possibilities opened up Wednesday for regional entertainment offerings. By regional I mean attractions serving a small metro area, not pulling from a whole country (or countries). Some of these areas could include Colorado, where a trademark for a Universal regional entertainment brand was established. Other locations for these sorts of parks could be areas that have Legolands or well-known local amusements:
They all could support a Horror Nights Las Vegas attraction-sized attraction and some could even support a Universal Kids Park-sized experience.
Another avenue of expansion is Universal's restaurant concepts. Last year Universal opened a Toothsome Milkshake Foundry concept at the Wells Fargo Center in Philadelphia and it's easy to see other locations for these to pop up - Dodger Stadium, AT&T Stadium, etc. I also believe Universal will expand their restaurant teams to local markets with copied and original concepts. A full-sized Toothsome in NYC Time Square, maybe somewhere closed post-pandemic? It would be easy to see NBC Sports Grill & Brew concepts opening anywhere a sports bar would be appropriate. Maybe a BigFire in Pigeon Forge? Could we see a Universal Great Movie Escape in LA or Atlanta?
Hell, what about a cruise line? Maybe Comcast purchases one, or they enter into some sort of branding contract. The Universal Cruise features themed dining, bars, entertainment and shows based on all sorts of NBC and Universal properties, and hell wouldn't it be wild if the private island is actually a Jurassic Park?
Pardon me for being a little too forward-looking here, but for the first time in a while theme parks feel fun and optimistic again.
Posted by Joe at 3:50 PM