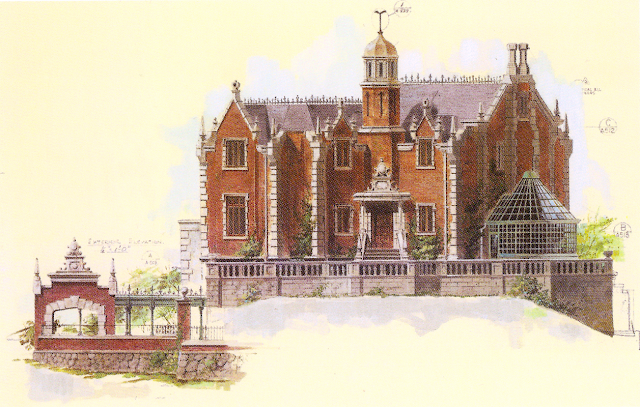 There's no other themed attraction on the planet that has created so many rumors, fan mythology, and intrigue than the Haunted Mansion. The facade in Disneyland was completed years before the ride opened and caused countless rumors of a ride so scary people died of freight. But what about the Walt Disney World variant? Why are guests talking about floating lights, poles in the ground, or ghostly child spirits on the ride when it opened with the park?

Boundless Realms, by Foxx Nolte of the amazing Passport 2 Dreams site, covers the origins of the Disney-ified Haunted House ride with a special interest in the Walt Disney World version of the attractiopn. Whereas most themed entertainment books look at concept art versus what was built, Boundless goes into a multi-faceted approach looking at the Mansion.

Foxx easily blends American history, first-hand accounts of the attraction, second-hand reporting, original design intentions, and more to give us a walkthrough of WDW's Haunted Mansion. The book never dives too much into one given field at once, instead, it samples views as needed. A great example being The Stretching Rooms - here Foxx looks at original design documents to find that an elevator was planned, why it was changed (the answer might surprise you!), where that elevator ended up, the alternations made to the mansion for this change, and her own first-hand reports of the rooms themselves. 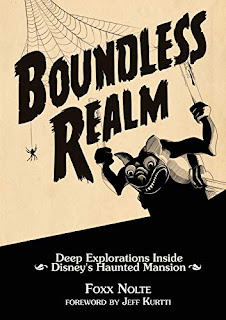 Using her unique position of working at the Mansion along with her honed research skills to pick apart the mansion in new and unique ways, Foxx is not interested in answering popular fan questions as much as she's answering questions right in front of our eyes. Besides the affirmation Stretching Room questions, she posits and answers dozens more. What time frame is the house from? Why was it redesigned? Why were there so many alterations to the attic? Why does the ghost host say "shh... listen"? Listen to what?

The book is like walking through the attraction with half a dozen experts that span themed design, history, mechanical engineering, operations, and more. The feeling created is a slowed down, extended ride-through of the attraction scene by scene, moment by moment. A curtain rod that blends into the background on most ride-throughs turns into swooping bird of prey imagery. After reading this book the Mansion changes, the subtle noise of the Doombuggies speak the secrets of the house.

While the majority of the book is covered in this scene-by-scene format there are also extended appendix sections that include notes on human and animal imagery in attractions, a short dissection of Phantom Manor (short as in it's not a full book on its own), a history of the sinister portraits from the portrait gallery, and a look at four attractions that took inspiration from the Mansion. The appendixes themselves can constitute a full blog post on their own and should not be missed.

Foxx sums up the book best in this line from Appendix E, "After decades of thought and thousands of rides I've realized that it isn't the scale of the Haunted Mansion that makes it so special. If ambition and scale were guarantors of excellence then the Mansion would have been long surpassed by such impressive, cutting edge extravaganzas as Harry Potter and the Forbidden Journey. That's an amazing ride, but it isn't the Haunted Mansion". This book is the deep dive in the X factor that makes the Mansion tick historically, thematically, mechanically, and which drives guests to become obsessed with it. Boundless is as much as a tome of the historical record for design inspirations as it is about the day-to-day realities of being a ride at the Magic Kingdom.

Boundless Realms is the perfect book for people who read websites like this, love the Haunted Mansion, or love seeing how American culture shaped the first few decades of Disney parks.

Boundless Realms is available at book stores online. The book was reviewed with a purchased copy.