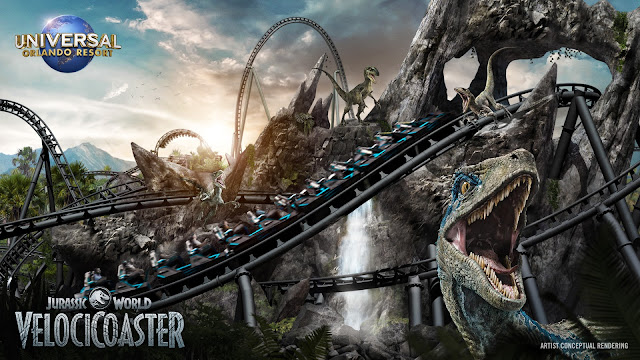 Opening Summer 2021, Jurassic World VelociCoaster will dominate the Islands of Adventure landscape offering new thrills and a modern coaster aesthetic. Guests will enter the queue south of the Jurassic Park Discovery Center on the waterfront and will proceed through the Jurassic World design lab. From the press release:

Guests will join the original cast of the films – Chris Pratt as Owen Grady, Bryce Dallas Howard as Claire Dearing and BD Wong as Dr. Henry Wu – as Jurassic World unveils the next evolution of its “carnivore expansion”: the VelociCoaster, where riders embark on a high-speed chase and feel the rush of the hunt while racing alongside a nimble Velociraptor pack.

Some stats for you coaster heads out there:

At this time there are no plans to turn the rest of Jurassic Park into Jurassic World, but Universal announced the new food and drink offerings from Hollywood will be making their way to the east coast. Rumors have also stated Orlando is looking into bringing over the walkaround puppets from Japan, though we do not know the current plans due to COVID-19 cutbacks.
We're super excited for this coaster, and lets be real, if they don't sell shirts that say "The Apex Predator of Coasters" then what are you even doing Universal?
Posted by Joe at 7:20 PM