Montana's place in amusement park history is primarily in the past. With no presently operating roller coasters permanently housed in the state, it is generally considered a "dead zone" for most enthusiasts traveling through the Mountain West seeking rides before the appreciable natural beauty of its vast wild spaces, giant peaks, and fly fishing streams. Since it has been without real amusement rides for so long, there's also little collected knowledge available. We here are Parkscope like to clear up some of these mysteries, and Montana will be little different. 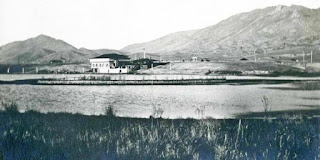 Prior to the Depression, two amusement parks came and went. Butte's Lake Avoca was home to "Lake Amusement Park," and Great Falls had Riverview. Neither park has much material to look at now: a poster was uncovered from Riverview and sold at auction in 2013, while Lake Amusement Park has but a single postcard online of the bath house. A third park, Columbia Gardens, had much more success. It had opened in 1896, and became the dominant place of amusement in Butte for nearly a century. It would be "joined" by Leon Park in Miles City in the 1930s. I put joined in quote marks because there's not much evidence of actual amusement rides at Leon Amusement Park; a pool and dance hall sure, but not really so much rides. According to a geneology.com article that is virtually all the known internet history of it's operation, Leon Park was sold in the 1950s and burned down mysteriously in 1968. People from the area recall the remains of the dance hall standing for many years afterward, though a search now clearly indicates that it is all gone.

Columbia Gardens, however, stuck it out until 1973. The mineral resources the park sat on top of made it worth more to the company that owned it than the park, and thus it was shut down for a strip mining operation. Home to a wood coaster, classic carousel, flat rides, and a dance pavilion, the park was being investigated for a move when it caught fire in November 1973. With that fire, any hope for a future Montanan amusement park effectively became lost. Today, the Spirit of Columbia Gardens Carousel is a privately-funded effort to try and recreate the lost carousel of the park and establish it on a new space inside Butte's Stodden Park. Things are progressing, and with luck, they'll be done by the end of 2017's summer.

In the present day, the closest thing to a proper amusement park in the state of Montana comes in the form of places that are primarily water parks. Big Sky Waterpark in Columbia Falls, MT has a classic carousel and cheap bumper cars slapped into a water park to give the state it's largest overall center of amusements. Woodland Water Park in Kalispell, Splash Mountain in Missoula, Electric City in Great Falls, and Last Chance Splash in Helena round out the traditional "outdoor" community water park offerings. There is also The Reef, a not entirely gigantic indoor facility in Billings that's part of Big Horn Resort. As of now, there are no alpine coasters at the ski resorts of Montana, but there are alpine slides at Whitefish Mountain Resort, which are arguably more fun and decidedly more dangerous.

With a state income tax under 7%, and no sales tax, Montana is certainly "business friendly," but also generally lacks services at the state and county level. Unlike many states where the existence of amusements may, at the local level, be subsidized or paid for outright from local budgets, Montana has precious few such things and they are all funded via private money. Many which were built with federal funds were converted in time when expenses became high: The Great Falls Civic Center, for example, had its ice rink converted into convention center space in the 1980s. The Great Northern Carousel and "A Carousel for Missoula" have come together in the 2000s as ventures of local business people and community leaders to have something for kids to do outside of hunting, fishing, and methamphetamine use. A rare exception to this is the Jefferson County Fairgrounds, which is home to a carousel used only during the fair and a mini golf course available throughout the entire summer.

While there are precious few roller coasters and no small trains, there are water slides, carousels, and  museums. The Western Heritage Center intends to communicate the story of those frontiersmen who ventured into the Great Plains to find something - anything - to call their own. Deeper into the mountains, one stumbles across the likes of Old Fort Benton, as well as Big Horn County Historical Museum and Visitor Center in Hardin. These may be without rides, but feature period buildings and costumes in an attempt to better get you, the guest, to grasp what life was like in turn of the century Montana.

There are some roadside attractions worth mentioning as well. The Montana Vortex is a classic gravity house style attraction that has gone the extra mile to invoke "energy vortexes" and "Sedona" because people who think they can draw power from crystals worn around their neck are generally total imbeciles capable of falling for anything. Amusement Park Drive-In in Billings physically has rides, but they were badly damaged in a flood and didn't open for 2015. The rides still appear on Google Maps, but there are no references to them on their Facebook or Twitter accounts.

Email ThisBlogThis!Share to TwitterShare to FacebookShare to Pinterest
Labels: Hidden Rides and Themed Attractions of..., Montana