Few states can manage to embody so many of the contrasts of the American Midwest in the way that Missouri can. Geographically, it's larger than New York or Florida. There are the plains and wetlands of both the Missouri and Mississippi Rivers. There's vast rolling farmland, as well as forests, mountains, and enormous lakes (many of which are man made). Around the rural beauty is also the unfortunate backstory of Missouri's slave state status and continuing racial turmoil in its urban areas. For outsiders, Missouri is a place anchored by two cities on opposite corners - Kansas City and St. Louis. Both cities have a pall of decay and despair about them with the ever changing global economy increasingly leaving them behind. Outside of those metropolitan strongholds are the capital (Jefferson City), college towns (Columbia, Rolla, Cape Giradeau), and a major resort destination (The Ozarks, anchored by Branson).

As always with the series, we start with that which is known: 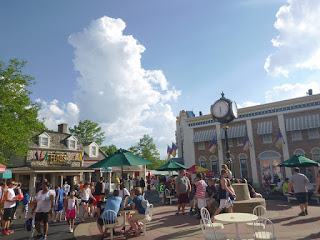 -Six Flags St. Louis opened as the third of the original Six Flags parks under the moniker "Six Flags Mid-America". The name was changed during the Gary Story years after the chain expanded and took on new facilities in Chicago, Louisville, and Cleveland, but the name has stuck even since. Unlike Six Flags Over Texas and Six Flags Over Georgia, which saw ownership stakes retained by the Wynne family, Six Flags Over Georgia is a wholly owned by Six Flags Inc. facility and thus requires a certain amount of cultural anthropology to see much of what was original to the park remaining as it has crumbled away over time. Highlights of the current lineup include the John Allen out-and-back Screamin' Eagle, the GCI wood coaster American Thunder, the launched Premier coaster Mr. Freeze, an Arrow log flume, a train ride, (Six Flags Mid America logos still in cast iron), and a Sally Justice League dark ride. 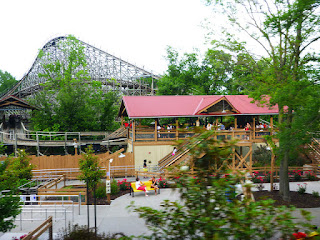 -Worlds of Fun was, I hear, a really cool looking regional themer in the late 90s before Dick Kinzel and Cedar Fair went about tearing all the charm out of it in stages. The park that exists now has a GCI woodie that is generally well regarded (Prowler), a Morgan hypercoaster that is generally well regarded, and a train ride that actually went back to having staged robberies of late. The raft ride (Fury of the Nile) might actually be a top 3 attraction at this park which lacks really solid show facilities or a dark ride. 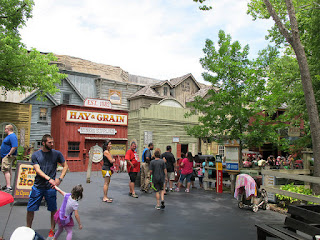 -Silver Dollar City is where the Herschend empire got started. Aesthetically similar to Dollywood, it has a number of really awesome aspects that Dollywood just can't match now: The Flooded Mine boat dark ride, the Grandfather's Mansion fun house, the fact that the first attraction here was a real life cave big enough to fit hot air balloons into, a top mine train coaster, a great custom S&S launched ride in Powder Keg, and oh so much more. SDC is one of my favorite parks in the world, no doubt about it.

-The St. Louis Arch and Museum of Westward Expansion are visited by several million people each year, and in addition to the one of a kind elevator system, the underground museum features an array of animatronic figures detailing the colonization of the Wild West. 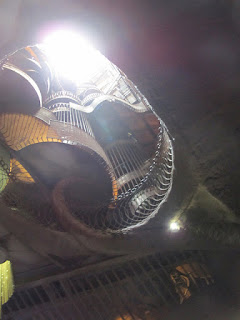 St. Louis is home to the state's largest metro population, and it shouldn't surprise people that it also has some of the more interesting attractions I'll be noting. The first of these is a modern creation: The City Museum. Not merely just a museum, but a sort of "fun house on steroids", City Museum was the brain child of Bob Cassilly, an artist who realized the potential in an abandoned shoe factory to create an interactive art installation unlike any other. Like other fun houses in the world, there barrels to roll in and slides to go down, but this "fun house" also has an array of interconnected tunnels, miniatures, pinball machines, a safe, opera posters, an airplane, and more jungle gym-esque equipment to climb on than can reasonably be imagined. When this series is over and done with, City Museum will be near the top of the list of awesome things to see.

St. Louis has other above average sights to see as well. The St. Louis Zoo is a free admission zoo (rare) which occupies part of the grounds of the 1904 World's Fair held here. A 4-D theater and Chance CP Huntington Train offer non-animal attractions. Union Station will soon be home to an aquarium and Chance 200-foot ferris wheel in addition to the impressive projection show already taking place in the main hall. Staying in the area and closer to Six Flags is the Endangered Wolf Center in Eureka, another AZA accredited institution.

Finally, we head to a county park to get a look back into living history. Faust Park in Chesterfield has two carousels; one an 1898 Armitage-Herschell, the other a 1921 Dentzel. The older of the two was converted to electric operation from steam, but the engine has been retained as a museum piece.

Walt Disney is probably the most iconic and important figures in the theme park industry, and much of what made Walt who he was occurred in Missouri. He grew up in the town of Marceline and later in Kansas City, where he established his first animation studio before moving to LA. As such, for the ardent Disney fan, Missouri offers an interesting glimpse unto better understanding Walt Disney: The Man.

Starting in Marceline, The Walt Disney Hometown Museum features a number of artifacts related to the man, his animation, and even the parks. In 1966, the Midget Autopia ride was donated to the city of Marceline along with an ampitheater, and though a spirited attempt to bring the ride back via Kickstarter was made in 2015, the effort fell short. In February 2016, the Marceline City Council voted to demolish the ampitheater and track where the Midget Autopia cars once ran. An Arrow Arrowflite Freeway Ride, Idlewild Park in Pennsylvania still operates a ride nearly identical to Midget Autopia to this day. Knoebel's Grove also operates what is likely a Arrowflite Freeway. As for the town itself, remember that this was the model for Main Street USA, Walt's tribute to small town America. 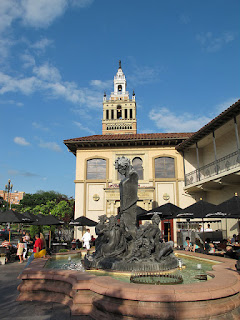 Over in Kansas City, the primary amusement park of Walt's childhood had closed by the mid-1920s. However, what does certainly still exist is Country Club Plaza. Opened in 1923, this was the first shopping mall/mixed use facility intended to be accessed primarily by automobile. It also appears on this list because the building exteriors have been heavily themed to resemble the Moorish architecture of Seville, Spain. This is also one of the early adopters of that now famous theme park tradition of garish Christmas lighting arrays and accompanying lighting ceremonies. While it's opening would have been significant, and the eventual effect of its innovations seemingly influential to an almost obvious degree, Country Club Plaza is not often mentioned in relation to Walt's development.

Kansas City also has another big mixed use development of note in what is known as Crown Center. Merlin operates both a Sea Life Aquarium and Legoland Discovery Center in the shopping complex. "Crown" is for the Hallmark logo, as this is abutting corporate headquarters and the Hallmark Visitor Center. Architecture and disaster buffs might also note that the Sheraton Crown Plaza here opened as the Hyatt Regency, and was the scene of a horrific disaster in 1981 where 114 people were crushed to death in an atrium walkway collapse. 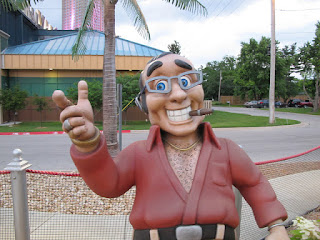 Branson is not a boom town. The best days for this city were in the mid 90s, when musicians and entertainers from around the globe packed enormous theaters filled with Middle American tourists seeking escape. As the demographic who made Branson what it is died off, and was replaced with lower income people with less interest in bluegrass music or comedy bits about Soviet Russia, hotels stopped getting filled. Branson USA, a new build park in the 1990s, was purchased by Herschend to effectively close it (they left it standing and abandoned in clear view for many years) and cut competition. Theaters are empty with grass poking through the parking lots. Meanwhile, Pigeon Forge/Gatlinburg has boomed, suggesting that there is only room for one such tourist draw.

In lieu of all this, two mountain coasters will be operating in Branson in 2017. The first, at Branson Mountain Adventure Park, actually opened last year. The second, currently under construction, replaces the Cool Off Water Chute, an early concrete water slide that predated Wet N' Wild and River Country. They join a bevy of existing attractions, such as the Professor Hacker's Lost Treasure Golf location and its train ride to the first hole and the Hollywood Wax Museum. The latter even has the throw-ins of the "5D" Castle of Chaos interactive theater attraction and Shoot for The Stars Mini-Golf (which may actually be slightly racist in its depiction of your manager, whom offers encouragement at each hole while describing your ascent in Hollywood).

Herschend operates White Water, a fairly compact water park near the main drag in town, and that competes primarily with a couple of indoor water parks as well as Big Surf (no relation to the Arizona park). With Cool Off Water Chute being dead, the most unique slide to the state is gone with it.

Outside the major cities, few bother to roam. I can't say I really blame them. But those who have came back with information about some weird parks. Bless them and their spending of money.

Hydro Adventures in Poplar Bluff isn't really near anything you'd go to, but since opening in 2003 has slowly obtained an audience. Since 2015, the dry ride options were added, and it is now home to the largest coaster in the state (an SDC built Galaxi) outside the big chain owned themers. There's a mix of cheaper Italian and American built rides otherwise. In the city of Osage Beach, halfway between Columbia and Springfield, is Miner Mike's Adventure Town. It is a classic, but large, family entertainment center. The rustic frontier theme is above average for the genre, but being honest, its primary function is children's birthday parties.

St. Joseph's is home to the Patee House, a museum complex that features a truly one-of-a-kind ride. The "Wild Thing" carousel, carved entirely by Bruce White, was taken in from the local mall. White is actually the guy responsible for the horses Applebee's restaurants use as flair/decor in the restaurants. That's not the only strange carousel in the state either. Perryville, a town located southeast of St. Louis, has a Herschell-Spillman carousel dating to 1905 which operates only for the 3 day run of the Annual Seminary Picnic the first weekend of August.
Posted by Alan Conceicao at 4:38 PM