Here at Parkscope we like to roll into the party right as the good liquor is being put away and Cards Against Humanity is being brought out for everyone to play. So in tradition of our stellar track record of timely news here's our Universal Orlando news report!

In our prior Volcano Bay post we speculated on several features of the new park and last week Universal further clarified these new, cool details. First up are that tickets to the new park will go on sale November 15th and the park will open 'early' Summer 2017, moved back from Spring 2017. I expect a tired pricing system and a new level of annual passes that add the water park to the mix.

Volcano Bay's premier 'secret' experience was unveiled as the Krakatau Water Coaster. The water coaster will use magnetic technology similar to Holiday World's Wildebeest to propel guests up and over hills. The tubes, themed to canoes, will weave in and out of the volcano and feature several cool effects, such as projection effects.

TheNJBrandon, our trademark truffle pig, found a trademark for Kohola Reef, the sit down restaurant at Volcano Bay.

Universal has filed for trademark "Kohola Reef Restaurant and Social Club." This will be the name of the restaurant in Volcano Bay. pic.twitter.com/9eIwbY6qbE
— Brandon (@TheNJBrandon) November 11, 2016

I do wonder how a sit down restaurant will do inside a water park.

Similar to many water parks around the world, Volcano Bay will be adapting a wearable device for  virtual queueing and payments. Each guest will receive a TapuTapu wearable and when they want to wait for a slide they will tap their wearable to a time station and be told to come back at a designated timed. As the return time approaches the wearable will give the guest a notification to return to the slide. Additionally the wearable will be used to activate effects around the park like jets of water and lighting effects.

TheNJBrandon also found information trademark filings for TapuTapu saying the device will do what's listed above plus unlock lockers.

Hey look at that new concept art, sharp, right? In the pre-show you can see historical props, set pieces, and equipment used in the Tonight Show, send a video Thank You Note to friends, and more. The pre-show will feature a traditional line along with a 'Studio 6B Club' where guests can interact and unwind before their time to ride. In studio 6B guests will board a flying theater to race Jimmy Fallon through New York. We believe the flying theater is very literal, imagine if the Tonight Show seating flew, not a flying theater like Soarin'. 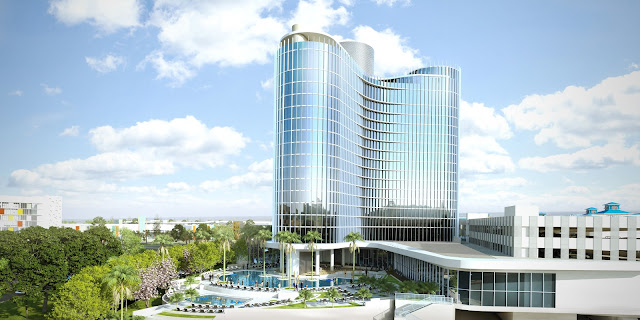 Long rumored, the sixth Universal Orlando Hotel has been announced. Run by Loews, this resort will be a prime value resort similar to Cabana Bay. The resort tower stands sixteen stories tall, feature a roof top bar, and a lobby Starbucks. The resort, like Cabana Bay, will not have Express Pass but will offer early entry. With a modern, minimal 'theme' and low price point it's clear this is for the single conventioneers and weekend HHN fans, but don't worry there will still be kids suites!
Posted by Joe at 9:32 PM