What's Going On With Kong?

Skull Island: Reign of Kong is quickly approaching opening. Here's an update on the attraction.

Several sources have stated that Team Members have been reporting to the attraction the past few weeks. This is a good indication that soft openings could occur once any last minute issues are fixed.

Regarding last minute issues, Teebin at Orlando United has suggested that the ride vehicles have been having issues reporting back their locations to the central ride system. This mirrors some similar issues with Gringotts, but we do not expect the issue is as severe.

Universal Orlando has released a teaser video and image of the new Kong AA figure featured in the attraction.

USA Today journalist Sara Sekula tweeted out a photo of her and Universal Creative lead for the project Mike West in the queue for the attraction.

Sara stated that an article announcing the attraction opening date and a preview of whats inside will be posted to USA Today soon. But wait... what's that behind her... 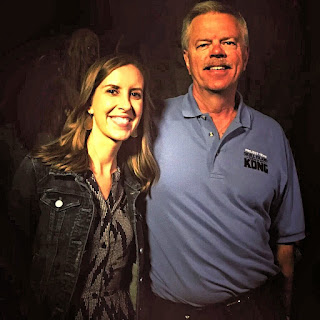 Media preview invites have started to go out for June 23rd, with Taylor from Orlando Informer receiving his earlier this week.

Skull Island: Reign of Kong is to open summer 2016. We expect soft openings to start at any time with a grand opening expected in June.
Posted by Joe at 1:24 PM