I joined in on the meme train once this year, with a meme that was 3 months out of date, to help illustrate what happened to all those USF rumors. Oh yea, I’m hip, I’m with it. pic.twitter.com/Q9uM4zCQyw
— Alicia Stella (@AliciaStella) December 1, 2018


During the writing of this article Alicia Stella and Robert Niles have both covered rumors about the third park. This article was written independently of them and I have not listened to/read their coverage at time of posting as not to take any of their information without credit. I look forward to checking out their coverage once this is published and I hope you take the time too.

Since the buyout of Blackstone from Universal Parks & Resorts by Comcast the resort has been looking to build a third theme park (not counting Volcano Bay here, sorry). An additional theme park and resort area makes logical sense for Universal, they are developing a unique product that challenges, remains fresher, and is more affordable than what Disney offers. We'll cover a little bit of the history of this expansion along with our expectations for the new park.

In December 2015 Universal lead a weak astroturf opposition group against the proposed SkyPlex complex. For a resort located two miles away the questions asked were odd: sightline issues, traffic increases that were not proportional to the size of the project, light pollution, and more. The SkyPlex group responded seriously and in jest, with local supporters of the project chuckling about Universal not even showing up to the local government hearing about SkyPlex. As the SkyPlex crew got their approval a late breaking bit of news came out of GrowthSpotter that Universal was re-purchasing 475 acres of land for a massive expansion. Now the questions and opposition to SkyPlex made sense, their questions were to set a precedent prior to finalizing any property purchases.

In February 2018 Comcast Chairman and CEO Brian Roberts sat down for an interview with CNBC to talk about the 2018 Winter Olympics and 2017 tax cuts. During this interview Brian confirmed that the tax cuts have jump started the 3rd park and resort expansion plans. Shortly after the interview land preparation started, with mass grading of land and the installing of new retention ponds.

Late October 2018 Orlando Business Journal's and friend of the site Rich Bilboa reported the first road plans for the new property. These plans come from permits and plans filed by Universal to the local government. 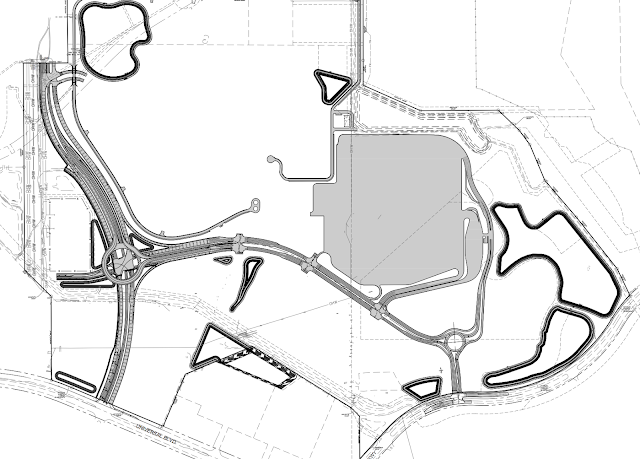 The new plans show a large traffic circle and roads connecting Universal Boulevard to the new property. The large grey plot in the middle of the plans appears to be a parking lot and toll booths for the new park. In my prior article I speculated Universal could develop the southern property immediately like they did the northern property with a CityWalk, resorts, parking garages, and theme park. These plans show that I was wildly optimistic here, they're going the basic route of one theme park and attached parking lot. Said park will be located to the left of the parking lot with backstage areas attached via the northern part of the new roads. Comcast has constantly stated they want to add more on site rooms and even after the new Endless Summer resorts open they will not be at their desired room total. With the new property being located so close to the Orange County Convention Center it would be wise to open the new park with at least one high end resort. Below shows an overall view of the size of the land and proximity to other points of interest along I-Drive. 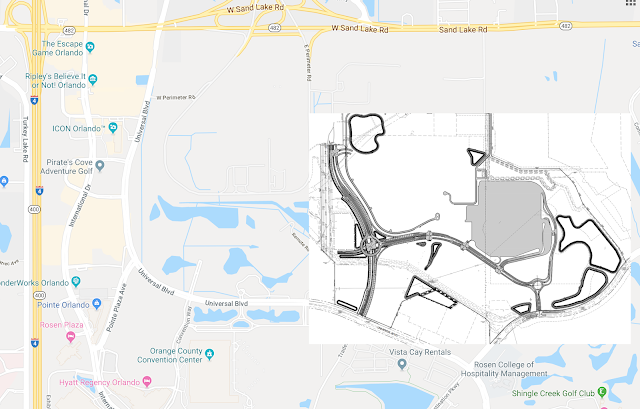 But enough about roads and parking, what will be in the third park? I will take some inside information, informed speculation, and a little bit of wishful thinking to layout and best describe the new park. Based on various trademarks it is possible the third park will be named Universal's Fantastic Worlds with a theme of large lands based around various worlds. If Islands of Adventure used highly themed lands then imagine Fantastic Worlds to combine multiple mini lands into one "world"; a Harry Potter "world" would be both Hogsmeade in IoA and Diagon Alley in USF combined, for an example of the scope. Mass grading of land has begun with dump trucks of dirt transported to the site daily but we are years away from an opening day; don't expect this third park to open before 2021 with a more likely date being 2022 or later.

So, what will be IN the park? Let's look at several rumors and ideas for the likelihood of each being in the new theme park. For consistency and brevity I will be referring to the Universal Orlando Resort's third park by the rumored name, Fantastic Worlds, or FW for short. 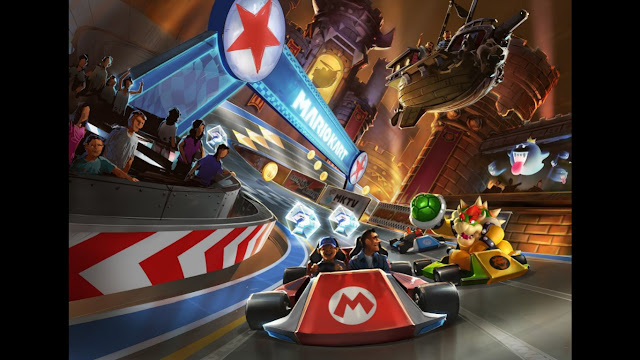 The big boy of speculation, Nintendo's partnership with Universal was announced in 2015 with groundbreaking for the new land taking place last year in Universal Studios Japan for opening by the 2020 summer Olympics. Japan will be receiving two rides with their Super Nintendo World: an E-Ticket Mario Kart thrill ride and a family friendly Yoshi dark ride. Universal Studios Hollywood has also started construction on their own Super Nintendo World with the expectation they're receiving something similar, or at least the Mario Kart attraction. 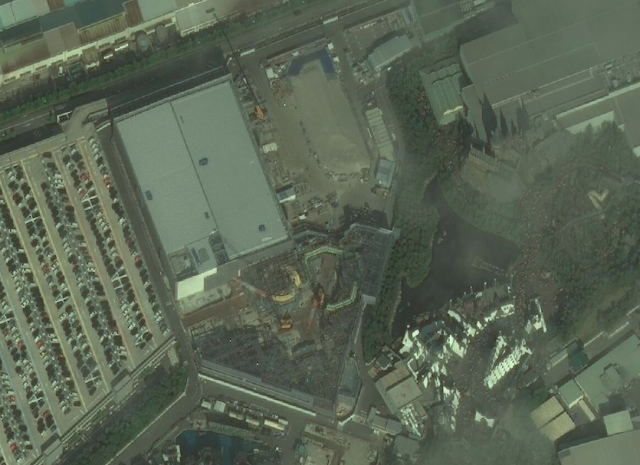 It's an open secret Orlando's Super Nintendo World was planned for the Animal Actors and KidZone area of the park (minus E.T. Adventure) but those plans changed once the third park became a priority for the resort and Comcast. Super Nintendo World in FW will expand upon the USJ land by adding the rumored Donkey Kong attraction to form a mini-world of Mushroom Kingdom and Donkey Kong Island. Mushroom Kingdom would featured the existing attractions from Japan while DK Island will feature a supposedly upgraded Donkey Kong coaster concept. Mushroom Kingdom appears to have one large gift shop complex and one counter service food location, we know less about Donkey Kong Island but a shop, food location, and maybe a kids climbing concept will be included. 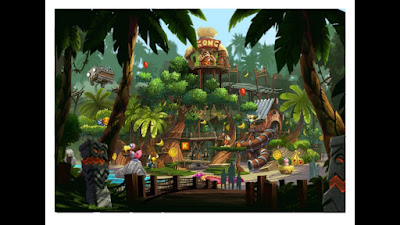 What about other Nintendo properties? Will we see Hyrule or any of the areas featured in the Pokemon games appear in FW? At this point it's pretty clear Universal is working on Legend of Zelda attractions and Pokemon attractions but rumors have placed these in the two existing parks (reportedly Zelda in Islands and Pokemon in the KidZone plot).

Likelihood: It's a lock and will be the focal point of the park.

If you asked me this summer I would have said "yes" but I am now firmly back in the "no" camp. The Jurassic Park in Islands of Adventure coaster is back on track after a questions this summer and some birdies have told us Jurassic World is flat out not in the cards for the new park. Too much is being spent in the existing land with just not enough credibility to back up adding it to the new park.

DreamWorks was purchased by NBCUniversal in 2016 and so far has seen little inclusion in the parks outside of additional walk around characters. Universal Studios Hollywood opened a new mixed use theater with a KungFu Panda attraction but that can easily be swapped out for a new experience as the park sees fit.

With rumors of Shrek 4-D's days being numbered DreamWorks feels like a natural fit for the new park. Several "worlds" could be offered such as; Far Far Away (Shrek), Isle of Berk (How to Train Your Dragon), Valley of Peace (Kung Fu Panda), and all the locations of Madagascar. Out of all of those choices Berk seems the biggest slam dunk with the areas beautiful vistas and many opportunities to ride a dragon.

Making the new park the DreamWorks park while letting the "studios" get Illumination films seems like a smart way to reboot which animated films appear in the parks.

Likelihood: Take it to the bank.

So if DreamWorks ends up at Fantastic Worlds, what about Illumination Entertainment? Well, I think Illumination will stay in Universal Studios Florida for the foreseeable future. With Shrek 4D closing it makes sense to build another Illumination attraction in that area to make a small "kids area" at the front of the park. The Secret Life of Pets going to Islands of Adventure rumor is still around too and the concept of adding a transition between the streets of Marvel to the cartoons of Toon Lagoon makes too much sense.

Universal Studios Beijing has a whole Despicable Me land, a Minion cruise ship with a roller coaster and the standard 4D ride. Would this come to Fantastic Worlds? I don't see it because we already have Minions in Universal Studios Florida, splitting the attractions between parks without a larger context like how Harry Potter is split between Islands and Studios using the "Hogsmeade" and "Diagon Alley" subtitles.

Likelihood: Probably not, but if there was one to get wrong it would be this.

The Wizard of Oz

Wizard of Oz, or more specifically something based off the musical Wicked, is a frequent rumor pushed by Jim Hill. I like Jim but this has never been more than a rumor or a light plan, just like how Lost Continent won't be replaced by a Whomping Willow spinner and Chamber of Secrets walk through. Jim has pushed Wicked something in the parks as a replacement to Marvel Super Hero Island (not going anywhere), a Wicked show replacing Blue Man Group (not going anywhere), and more.

Wicked has spent years in movie development hell with no sign of exiting. Any depiction of Oz based on the classic movie would need approval from MGM Studios, that's likely not happening. Going generic could work, but would that work as a whole World? I'm skeptical. Everything leans towards The Wizard of Oz being very unlikely at opening. Once a film version of Wicked is released and turns out to be successful and popular I can see something opening in the parks. But not at opening, and not necessarily in Fantastic Worlds.

Likelihood: I miss the Great Movie Ride too, but no.


Attractions based on the classic Universal Monsters have been on and off the stove for years. Originally Islands of Adventure was to receive a Van Helsing ride, based off the 2004 movie, where Forbidden Journey ended up going. Universal Studios Hollywood had their classic monsters walk through maze. And now, if rumors turn out true, Fantastic Worlds will have their own World dedicated to monsters.

The plans as we understand them revolve around the original Van Helsing ride concept with a large village surrounding it. This would be a good location for shows, a coaster, and more based on the monsters. While I feel confident this is coming to the park it also feels like the first thing that could be cut if cost overruns occur. Because of that I'm tossed on it happening.

A Ministry of Magic ride is rumored to be coming to Universal Studios Florida, but that plan seems to have been put on hold. We've heard something Potter is coming to the new park, so what if its a Fantastic Beasts era ride through all the Ministries of Magic around the world? You jump between all the locations using the floo network to catch and apprehend Grindelwald.

Likelihood: Likely, Potter is successful in the other parks, why not bring the rest of the Wizarding World to the new park as a lock in of success?

This is all I wrote till the night of December 12th. Then this came out in the morning.


Ladies and gentlemen, I give you: UNIVERSAL'S FANTASTIC WORLDS!

So, yeah, I've blown past three scoops and now I'm just hitting publish. It's Fantastic Worlds. It's going to be awesome and it's coming sooner than you think.
Posted by Joe at 9:48 AM