It's huge! It speaks French! Did I mention that it is huge and full of people that speak French? Yes. French. It's a really foreign place but it shares a border with the United States and you can go there almost any time you want assuming you don't have a prior conviction. Disney's EPCOT features the Château Frontenac as its center piece from Quebec City, so it is exotic and fantastic enough to feature as theming elsewhere. The second largest territory/province in area, and the second largest in population (behind only Ontario), Quebec has some mountains, wilderness, giant cities with underground development, fjords, lakes, moose, roads to basically nowhere: there's a lot happening in, well, a lot of space. 595,391 square miles, to be precise. That's more area than every state in the US Eastern Seaboard, Vermont, Ohio, West Virginia, and Alabama combined.

For all that space, there's fundamentally only one major theme park for the area. La Ronde opened in 1967 as the attraction and amusement area of that year's World's Expo, and while little remains of the original rides, there are a few gems like the monorail and "Tchou Tchou" - it's a kiddie ride, but it's probably the most adorable thing here. Did I mention this is a bad theme park? It is a bad theme park. Possibly the worst. So bad that we here (OK, me alone) attempted to get in contact with the employee's union at La Ronde to get their take as to why people think La Ronde is generally considered the worst run theme park in North America. I've been. Twice. I only got in once when they closed unannounced on a national holiday because there was rain (the employees, still being paid, stayed and I swear to god continued ran rides in the not open amusement park). The second time I went rides never ran more than one train and it was a miserable, awful experience that I fled early from because, really now, I was in Montreal.

But I'm not going to talk that much about La Ronde, because Six Flags owns it and theoretically, it is "known" in a way that most other parks. No, we spend our time here on Parkscope with this series on things that are more interesting; more fun. More challenging. So instead, we're just going to point Google Maps at the same exact artificial island and look south. 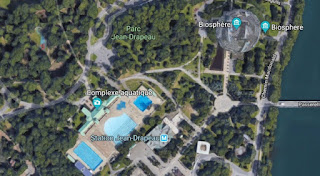 If the Biosphere in Montreal looks like a Geodesic dome, that's because it was one until the skin burned off of it in the 1970s. It's part of a mix of active and dead fragments left from the World Expo, ranging from the good (how Habitat '67 are some of the most desired condos in the city) to the diminished (abandoned pavillions like Jamaica's and Tunisia). Still, it's the Montreal Biosphere that best lives up to the promises of futurists and educators with its incredible metal framework and important messaging.

Quebec is also home to some of the more quirky steel coasters on the planet. Mega Parc, located inside Quebec City's Galeries de la Capitale, is presently undergoing a "reimagining" of sorts, but it is hoped that Capitale Express, a junior coaster that encircles the ice rink, will reopen with the rest of the facility in late 2018. Still operating is the Python Panique, an adult sized L&T Systems steel coaster at Granby Zoo. Granby Zoo is a rarity in Canada as a AZA accredited facility, and often offers discounts to those with memberships to US zoos. There's several other rides present, mostly for kids, but an operational monorail and carousel also beckon beyond just the animal exhibits.

Small kids parks dot the landscape in Quebec: Pays des Merveilles is a classic storybook park with pretty much nothing for childless parents to do (so please, please don't go unless you have kids) a little bit north of Montreal. Village du Pere Noel in nearby Val-David fills the requirement for a Santa-themed park, equally bereft of anything for normal adults to do. But most aspirational of all is Parc Cavaland, a theme park of sorts based around horses. Every child can ride a pony. Or a carousel, if an artificial animal is preferred. Also they may paint ponies and watch an array of equestrian shows ranging from displays of horsemanship (is that a thing?) to jousting. It's like an expanded Medieval Times or something. It's...interesting.

Is a horse themed park with horse riding not enough weird for you? OK, fine. Because I've also got La Vallee Secrete in Saint-Raymond, not far from Quebec City. There's a forest filled with various booths you need to interact with to get clues from which you can solve some sort of mystery, and if you collect them all, you gain access to a building with an animatronic dwarf show because that is absolutely the thing you wanted.

Not enough wandering through the woods? Then there's Foresta Lumina, a night only experience filled with various projection mapping sequences, LED lights, and just overall amazing stuff that you have very likely never in your life heard about. Part themed attraction, part art installation, it's part of an increasingly DIY approach to themed design that has sprung up with the Meow Wolf's of the world.

Quebec is in Canada, which most Americans think is exceedingly cold. Of course they would have a tremendous amount of water parks then. Mont Saint Sauveur is the most famous of them, with a mix of old concrete and newer plastic/fiberglass slides. If there's one cornerstone attraction there, it would have to be Riviere Colorado, a 2+ minute long "rafting adventure" with two person rafts that seat face to face on a perilous journey. Ski Bromont also has a water park with some weird relics; Trompe d’éléphant spits riders out of a "elephant trunk" through the air and into a deep diving pool (complete with audience viewing seating), while Grand Canyon is a fine concrete slide full of random pools which exist for no clear or obvious reason. Even Super Aqua Club in Pointe-Calumet has a pair of concrete tube slides in addition to its primarily ProSlide based modern rides (which includes a really awesome looking ProSlide RocketBLAST/FlyingSAUCER water coaster).

Slide action doesn't end in Summer. No; Winter is really the dominant season in Quebec, and that means tobogganing. Since 1884, the Terrasse Dufferin Slides are seasonal icons. Their classic lighting scheme and appearance evokes a real feeling of yesteryear. And for about 6 months a year, you can enjoy them. Valcartier Vacation Village may not have the history, but it has size as the "largest snow park in the world." That distinction is related to their impressive collection of tubing runs, including some based off a tobogganing base and a few using what look like white water rafts.