Canada's smallest and least populated province, Prince Edward Island (often just referred to as PEI) is one of the Atlantic Provinces along with Newfoundland, Nova Scotia, and New Brunswick. Many people come to enjoy the beaches here, which feature surprisingly warm water thanks to the Gulf Stream and red sand. There's great shellfish to eat; PEI mussels being world renowned. Throughout the summer time, cruise ships will stop in Charlottestown as part of their Canada routes, bringing in huge groups of tourists. Others will arrive by car ferry or the Confederations Bridge, a phenomenal 8 mile world wonder with steel reinforced pillars intended to work like ice breakers. But make no mistake; there aren't any huge cities here. Charlottestown has a population just a tick over 50,000. That alone is 1/3 of the permanent population.

Aside from shellfish, whale watching, and red sand, PEI is most notably the setting for L.M. Montgomery's Anne of Green Gables. The book is, of course, extremely famous, and popular not only in the Americas, but wildly loved in Japan where Anne's sacrifices mirror cultural norms. As a result, the island is one of the most popular locations for Asian tourists in all of Canada. While Anne is a fictional character, her experiences were generally based in the real life experiences of settlers and farmers in the region. Prince Edward National Park contains the Green Gables Heritage Place; a mockup of her life, home, and that of many other characters with people playing the roles of the book's protagonists in costume. 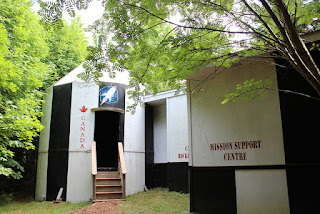 The proximity of the book's setting to the Cavendish Beach region of PEI ultimately led to the development of a tourist strip here. While it is nowhere near as built out as, for example, Pigeon Forge, there are still a number of attractions along here that evoke reminders of Montgomery's series. The first of these to open was Rainbow Valley in 1969; a storybook park built entirely in house, primarily from fiberglass. There were some rides to go with it, but it is most noteworthy with the region for it's walkthrough attractions, dark ride, and the Owl which spoke to guests (think a prehistoric Turtle Talk with Crush). The park closed in 2005 when the owner retired and sold the land under it to Parks Canada for an expansion of the Prince Edward National Park. However, just down the street from where it once stood is Shining Waters Family Fun Park, it's spiritual successor. Whatever classic decor/theming items could be taken from Rainbow Valley effectively were and wound up in Shining Waters, along with new water slides and an array of different rides. A recent expansion saw the construction of the Buccaneer Bay Bullet, which formerly ran inside New Brunswick's Crystal Palace. It probably has one of the highest concentration of walk through attractions in any park, plus a wilderness hike.

Shining Waters is part of the Maritime Fun Group's strangle hold on facilities in the province. Only a mile or two away is Sandspit, a more traditional amusement park with an unspectacular collection of fairly basic flat rides and a Schwarzcopf Wildcat coaster. The most interesting item at the park is probably that coaster: when it rains in PEI, operators place canopies over the cars to prevent the occupants from getting wet. It is the only such Wildcat with these custom covers. Maritime Fun Group also possesses one of the smallest Ripley's Believe it or Not! locations on the planet in a strip mall looking edifice that contains an FEC (Adventure Zone) and mini golf. The group also possesses the Route 6 Haunted House in Cavendish and the Burlington Amusement Park in Kensington; that's primarily a FEC with go-karts and batting cages, along with a set of bumper cars and bumper boats. 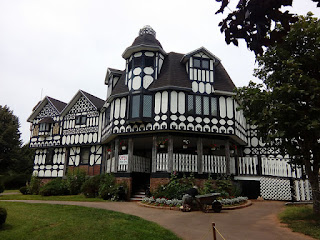 While there is a lot that's controlled by Maritime Fun Group, there are still attractions in this region which are not. Perhaps the most compelling of all of these is Haunted Mansion in Kensington. Built in an old Tudor-style mansion by Rainbow Valley's owner's son, the Mansion opened after the son realized he made a mistake not taking over his father's park. The facility has, in effect, two parts: one is the giant walkthrough mansion itself. That's a 20-ish minute experience, and probably among the best non-Halloween walkthroughs anywhere. After exiting, there's an array of miniatures to look at, then a separate section with kiddie rides and even some bigger flat rides (like a Tilt-A-Whirl). It's very reasonably priced and seems to be quite popular even being a little off the tourist track.

On Route 6, just down the street from most of the main attractions, sits the incredibly strange and partially abandoned Great Island Science Center & Adventure Park, since sold and rebranded as Jurassic Bart's Dinosaur Museum & Petting Farm. There's free play carnival style games out front to just practice on endlessly. There's some dinosaur statues.. There's a petting farm. There's a rotting and inaccessible full size model of a Space Shuttle and an equally derelect planetarium. You get your UrbEx and your fill of prehistory all in one place.

Finally, we head to Charlottetown for area's one factory tour of relevance: Cows Ice Cream. A super premium ice cream available almost uniquely in the region, Cows has a visitor center with a short film, windowed assembly line, and lots and lots of shirts for sale (usually riffing off of whatever is big in pop culture at the moment. I'm sure there's some "What are thoooooose?" shirts on sale right now with fax Black Panther holding a waffle cone flying off the shelves.
Posted by Alan Conceicao at 9:17 PM