This past Sunday Maelstrom closed to be replaced by a ride through the movie Frozen in 2016. As the sun rises in the east and winter gives way to spring, people are debating and commenting on the change.

I do not agree with the statement fantasy/folk lore doesn’t belong in Epcot. For a long time the America Pavilion was designed to have a boat ride through the tall tales and folklore of America. Many American folk stories have featured in Disney short films or movies, but they were authentic to the culture and creations of it. In addition Norway was ONE of the original sponsors for the pavilion, a pavilion devoted to Nordic countries. While designing the pavilion, the theme and location was kept broad enough to encompass a geographic region, not a country. As funding finalized, Norway and several Norwegian companies were the financial sponsors of the attraction, and as of 2002, Norway has stopped funding the pavilion.

EPCOT Center/Epcot’s purpose is to inspire and inform people about the real world around them. Future World uses history and the present to inform people about the science and technology of the future; World Showcase uses culture, food, drink, and entertainment to… well… showcase other cultures. And this leads us to our first issue with Frozen coming to Epcot: it’s not authentic to the culture.

The attraction coming to Norway, per the Disney Parks Blog, is going to be a Fantasyland style ride retelling the story of the movie. It is not about Anna and Elsa visiting Norway, nor is it about the myths and legends of Norway. The Three Caballeros featured live action trips to Mexico (along with Brazil) and discussions about its culture (and yes, it was a political puff piece). Maelstrom was rooted in fantasy, but genuine to culture and stories from the area. Frozen did start as the Snow Queen, a Nordic tale, but the end product is a Disney creation. Nowhere in Frozen is any of the original Danish fairy tale. Disney’s trying to pass off an ‘inspired by’ byline to this attraction to justify the ride. I believe a classic retelling of a unique, and good, Disney story does not belong in World Showcase.

If you believe that Frozen can/should still be added to World Showcase, I think there’s something people are missing: Epcot has expansion pads. 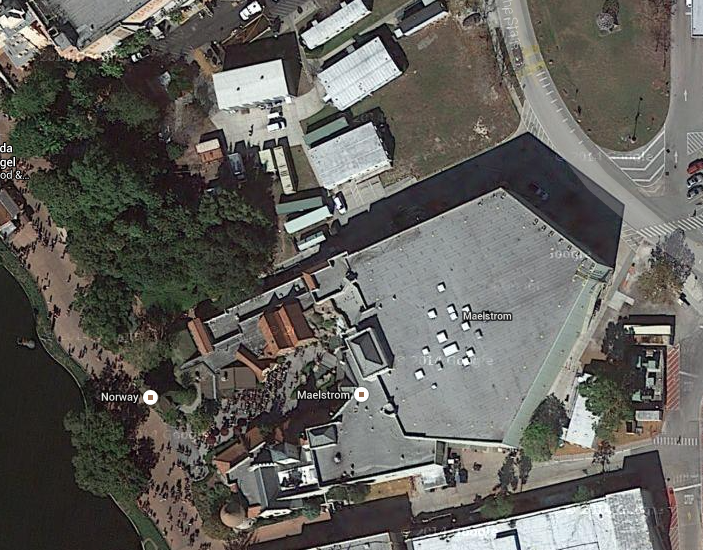 This is a view of Norway in Epcot, north of it is a huge expansion plot for a new land or attraction. There are 6 additional plots located around the World Showcase and several empty pavilions and spaces in Future World. With “an abundance of size”, why is Disney replacing rides in a park that needs more rides just to simply fill out it’s FP+ system?

Frozen deserves a classic dark ride for a classic movie. A fully realized version of Arandale with a Frozen dark ride would be welcome by all. What is confusing and frustrating is Disney’s handling of a $1.24bn property by supplying Olafs on a stick, an ice rink, a temporary mini parade, and an overlay over a low capacity attraction. It is a disappointing reaction from a company that has asked us to hold them to a higher standard (and pay for it too).
Posted by Joe at 7:36 PM